Legislature on the verge of big changes to BPT 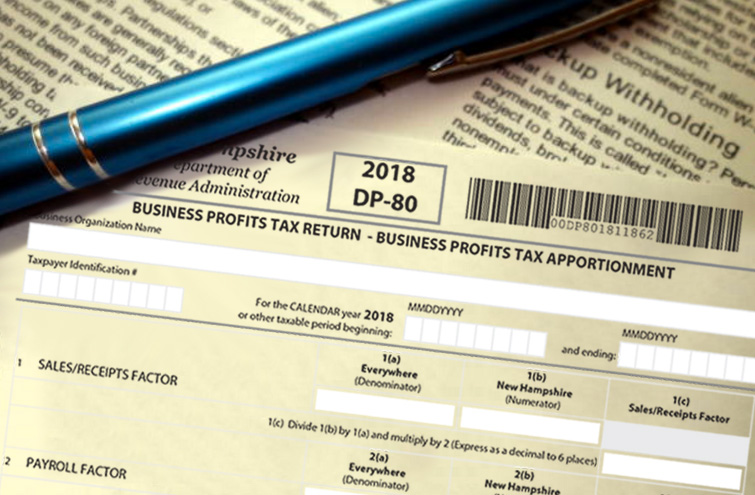 Letizio had been already working diligently for four years to figure out a way his business — A.J. Letizio Sales & Marketing in Windham — could avoid paying business taxes on the same profits twice, once to New Hampshire and once to Maine, and perhaps to dozens of other states.

He had joined a commission to look at the apportionment problem, the way that the profits of companies that do business in different states are taxed. New Hampshire’s tax system is way behind the times — not just in keeping up with the federal government — but with competing states as well, he said.

It’s complicated, but in summary, because New Hampshire is still doing things the old way, companies in the state pay more in business taxes, and out-of-state companies pay less. For a small business like Letizio’s, which employs about 75 people, the extra tax bill amounts to tens of thousands of dollars. For larger companies, it could mean millions.

Indeed, for some of these companies, fixing this problem is much more important than reducing the tax rate. It could even encourage some companies to leave the state and discourage others from moving here.

Fixing it, said Chris Sullivan, a corporate tax attorney based in Manchester, will “ensure that we can retain the advantages that we have compared to other states.”

Senate Bill 190 — legislation that came out of that commission — would use market-based sourcing to fix a part of the problem: the way the state counts profits from the sale of services. But — at the time of that February hearing on the bill — it wouldn’t go into effect for another three years.

You could hear the frustration in Letizio’s voice.

“The study commission goes here and goes there and ultimately nothing happens,” he complained. “I’m a businessman, and when we have a problem, we take care of it. In government, it seems we sit on our hands while the house is on fire. We need some sense of urgency.”

Letizio may get more than he asked for. On May 31, the Senate Finance Committee not only put SB 190 in its version of the budget, but added two other major provisions — the single-sales factor and conformity — that were studied but had no public hearing this session. Together, they will mean big changes in the way the business profits tax and, to some extent, the business enterprise tax are assessed.

As for the effect of all this on the state, and future budgets, nobody really knows for sure.

Thus far, most of the focus on business taxes has been on the tax rate, which has been going down and was scheduled to go down further. But the Democratic budget put a halt to that, even rolling the future cuts back to last year’s rate. That is one of the issues that might cause Governor Sununu to veto the entire budget.

But that was an argument over the rate. The other two factors are the rate base (how much taxable profit did a business make) and apportionment (what percentage of those profits were made in New Hampshire by multistate companies). 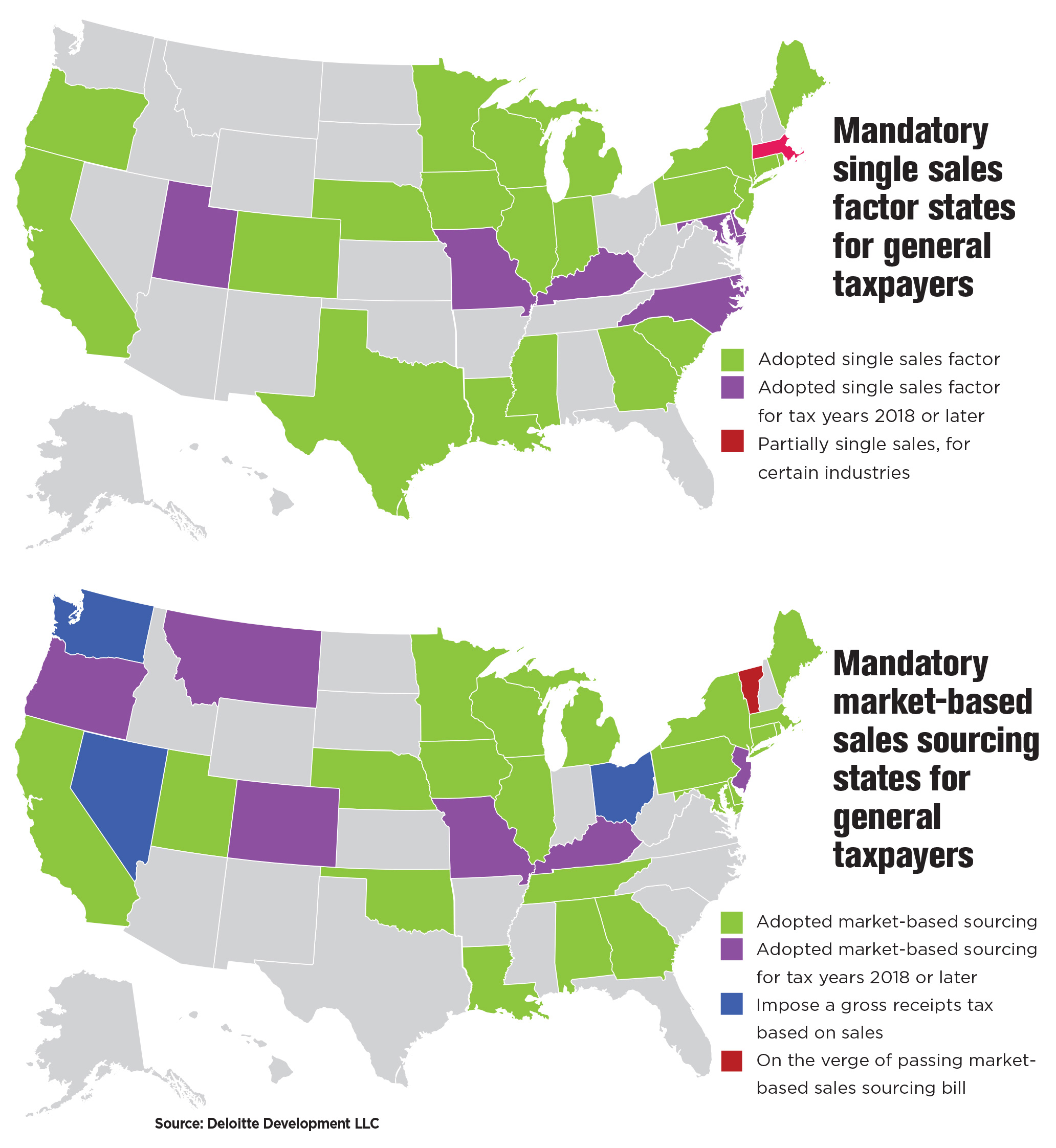 Once upon a time, apportionment was relatively simple. Every state did it based on the same three factors: payroll, property and sales. Each state would figure out the percentage you paid your workers there, the percentage the value of the property you owned there and how much you sold there. The three factors once had equal weight, but most states — including New Hampshire — double-weighted the sales factor. So sales now counted for half the weight of how to split up the profit pie, with payroll and property accounting for a quarter each.

Then about half the states went a step further. They switched to a single-sales factor, meaning that only a company’s sales determined what percentage of profits should be taxed in each state. Property and wages didn’t count for anything.

The change was made because, simply, states wanted companies to move or stay in their state. By switching to single sales, a company would not increase their taxes in that state by doing business while locating there. Indeed, if they, like most manufacturers, sold most of their goods out of state, they would pay hardly any business taxes in their home state. And if all the other states operated in the old way, where sales only count for half of the apportionment, the practice would cut their tax bill nearly in half.

Iowa was the first to figure this out, as an attempt to lure big companies like John Deere and Caterpillar from Illinois. Some companies challenged this, but in 1978, the U.S. Supreme Court ruled that this was a state decision.

Since then, 25 states have followed suit, and at least four more are slated to follow. That means that the single-sales factor is not as useful a tool as it once was in cutting a company’s state tax burden, but it still is helpful, thanks to those states that haven’t made the switch yet.

New Hampshire is one of them. Indeed, it is the only state in the Northeast that hasn’t moved to single sales besides Vermont. (Massachusetts made the switch for certain industries.) It is one of eight states without single sales east of the Mississippi River.

New Hampshire has been thinking about it for a long time, as Letizio’s frustration indicated. But state lawmakers have hesitated because they aren’t sure of the effect on the state’s bottom line. That’s because sales are so “historically volatile,” said Shaun Thomas, tax policy counsel at the state Department of Revenue Administration.

Property and payroll don’t change much from year to year, but the percentage of sales in New Hampshire compared to the rest of the country can vary, particularly among very large companies.

The DRA ran the numbers for three years.

Single sales used to be on the wish list of the Business and Industry Association of New Hampshire, but it has dropped off in the face of this hesitancy. 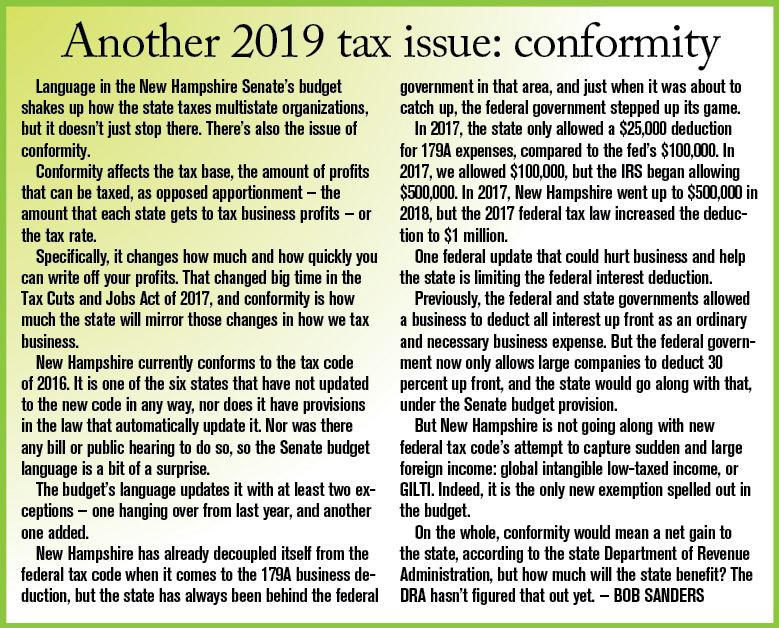 Instead, the state appeared to make a more modest apportionment adjustment on one part of the sales factor: taxing “tangible person property” or services. That is what SB 190 is all about.

This used to be a relatively small part of the sales factor reserved for lawyers, accountants, engineers, real estate firms, construction companies and consultants — professionals that sell their services locally, across neighboring state lines. Such sales were treated differently than sales of tangible property. Under the old method, the sales portion of the BPT was taxed based on where most of the cost of performance of those services occur: the home state of the business.

For instance, Letizio performs his services — brokering sales to grocery store chains up and down the East Coast — in New Hampshire, so he has to pay nearly all of his state taxes (the BPT) in New Hampshire.

But 30 states (and one on the way) switched to market-based sourcing. Those states look where the buyer, not the seller, is located. Maine is one of the states and that’s where the Hannaford chain is based. It’s one of Letizio’s biggest customers.

In 2015, Maine contacted Letizio and said that his company has to pay that state’s corporate income tax as well, going back years. But he had already paid those taxes to New Hampshire, who was not able to refund him the money.

“They say it’s not double taxation, that you have to pay the tax because that’s the law. But when money leaves your checking account twice for taxes on the same profits, that’s double taxation,” he told the Senate Finance Committee.

But it isn’t as volatile, said the DRA’s Thomas.

The state won’t be switching from taxing property and payroll to sales, but changing the way it looks at some sales. The DRA estimates that it would result in $10 million more in the first six months of 2021 (the last six months of the two years being funded in the budget now before the Legislature).

At first, the DRA worried that it wouldn’t be able to get it done by that time. The rules alone would take about six months, Thomas said. That’s because it is so hard to define service sales in the era of the cloud, where everything from software to music is downloaded.

Merrimack-based Connection, for instance, used to ship software in shrink-wrapped boxes. Now it primarily sells computer services to businesses. And then there are sales when services are bundled in, like a computer system with an installation contract, or even a tractor with a warranty. Massachusetts’ rules run up to 80 pages.

But lawmakers didn’t want to wait until 2022 to decide.

The House Ways and Means Committee unanimously recommended passing SB 190, and at deadline the full House was expected to approve it on June 6, though it did amend the bill to make clear that it applied to 2021 and was also applied to the dividend portion of the BET.

The Senate Finance Committee went a step further. It not only included SB 190 in House Bill 2, the trailer bill in the budget, but it also included a switch to single sales. However, the single sales factor wouldn’t be applicable until 2022, so it’s uncertain whether the impact on revenue would be included in the upcoming budget.

“This business reform will prevent many small businesses from being double-taxed by other states and will ensure that many large out-of-state corporations pay more than their fair share to the state of New Hampshire,” said Sen. Dan Feltes, D-Concord.

How this will go over in the House remains to be seen. Calls to key members of the House Finance Committee were not returned by deadline, but Rep. Susan Almy, R-Lebanon, chair of the House Ways and Means Committee, was not happy with the proposed change.

“They’ve done this with no preparation, no bill, no hearing, no revenue estimate with the DRA,” she said. “They are doing all this stuff that should have been in the regular process. I objected to this kind of thing heavily when the Republicans did it, and it’s no better when our party does it now.”

But advocates of the change shrug her comments off. “It’s not uncommon that it is included in the budget process,” said Sullivan.

The Senate was scheduled to vote on the budget on June 6. If it passes, both the budget and SB 190 are expected to go to a committee of conference, which has to sign off on a compromise by June 20 and vote on June 27.