But supporters of bidding firm see principals as ‘go-getters’ 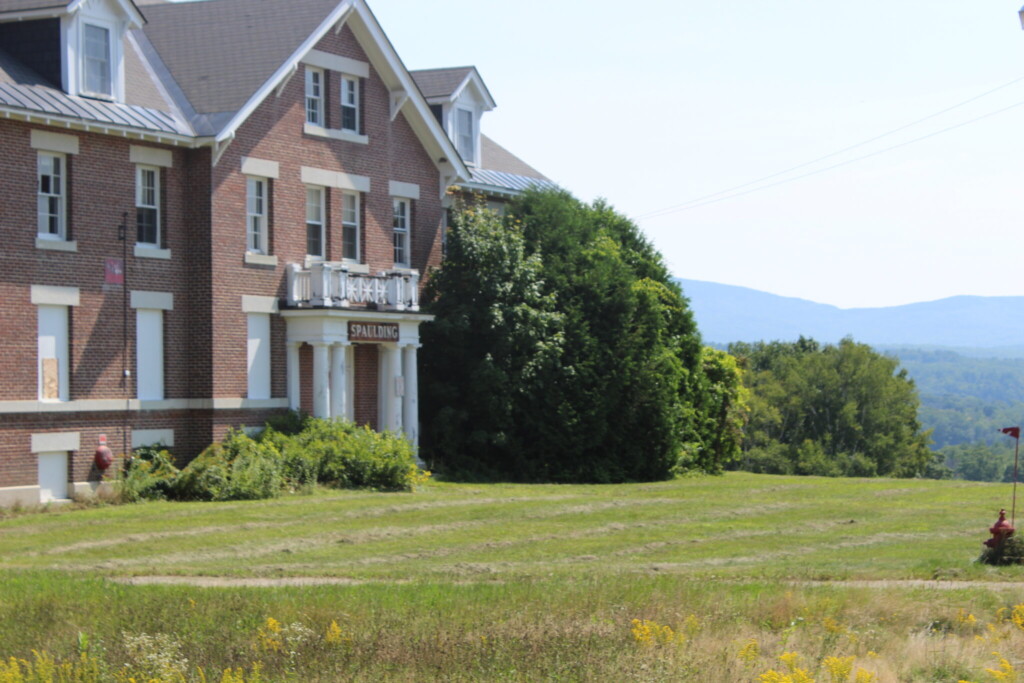 The buyer who has offered $21.5 million to buy the former 220-acre Laconia State School property and develop it into a massive housing and entertainment village has never developed such a large property. (Annmarie Timmins/New Hampshire Bulletin)

The Manchester developer chosen by the state to turn the 220-acre former Laconia State School into a massive housing, entertainment, commercial, and medical services campus has never completed a project nearly as large, she said Monday. Her biggest project in New Hampshire, a mixed-use property in Manchester, is three years behind schedule and the subject of a lawsuit brought by an investor.

The Department of Administrative Services is expected to ask the Executive Council on Wednesday to approve a $21.5 million purchase and sale agreement for the property with Robynne Alexander, a Manchester woman with connections to several real estate development companies in the state. In an interview with the Bulletin Monday, Alexander said state officials and the brokerage firm hired to market the property are aware of her professional experience and the lawsuit pending in Hillsborough County Superior Court. She said she is confident she has the investors to deliver what is an ambitious project.

The site would include about 1,300 housing units: 340 single-family, duplex, or triplex homes, 170 of which would be “entry level” homes; 108 condominiums; 500 multifamily apartments, 120 of them for workforce housing; and 350 townhomes. There would also be senior housing, with 360 independent senior-living homes and 230 assisted-care units. Alexander’s plan also proposes a conference center that can accommodate 1,000 people and a “destination center” with 250 rooms, as well as urgent care, pharmacy, and child care facilities. And 50 percent of the site would be preserved for recreational use, possibly climbing walls, a dog park, and an entertainment venue. Alexander has dubbed it Legacy at Laconia.

She said the Department of Administrative Services discouraged her from discussing the project in detail until the council has approved the purchase and sale agreement. She said she is confident she has the investors and experience to complete the project.

“I’ve disclosed how we’re going to be able to do the (Laconia) project,” Alexander said. “I had to be able to show them or they would not have considered us.”

She said her investors are prepared to spend $500 million, probably more, developing the property.

A call to the state Department of Administrative Services, which is handling the sale of the property and chose Alexander’s proposal over three others, was not returned.

Councilor Joe Kenney, a Union Republican whose district includes the Lakes Region property, said Monday evening in a text message that he had “no information on this issue at this time.” Councilor Cinde Warmington, a Concord Democrat whose law firm is representing the investor suing Alexander in Hillsborough County Superior Court, could not be reached Monday evening.

State and Laconia city officials have much riding on the council’s vote.

The state has failed for years to sell the property because its expansive lake views couldn’t overcome the site’s significant development hurdles, which include nearly 30 dilapidated buildings. The site, which was most recently a state prison, proposes such significant challenges, the state was prepared to give it away for the right project.

The city of Laconia is eager for the potential tax revenue and insists that the buyer develop the entire 220-acre lot, not just the prime acreage along Route 106. And the city, which will have to approve projects on the site, wants to see affordable housing included. 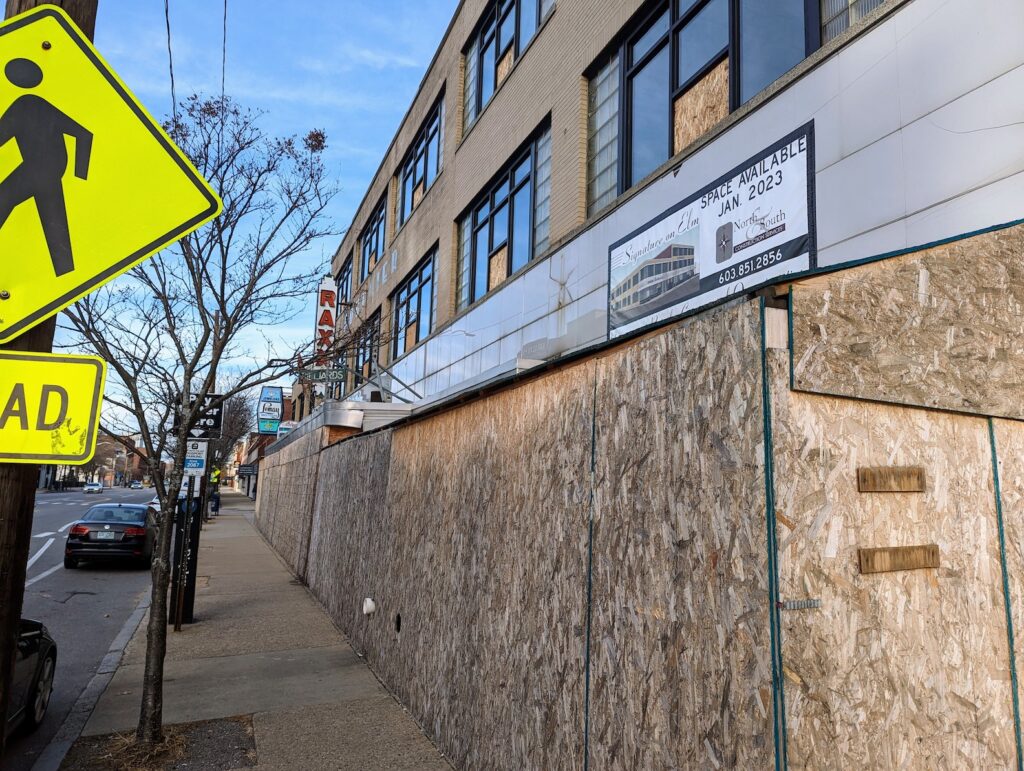 The former Raxx Billiards on Elm Street in Manchester shows the sign for “Signature on Elm.” (Courtesy of Carol Robidoux/Manchester Ink Link)

“The proof is in the action here,” Laconia Mayor Andrew Hosmer said. “We’ve been assured throughout by the Department of Administrative Services that the buyer understood the overall obligation when they pitched this: That we are intending housing, not just high-end housing, and we want the whole piece developed.”

The proposed purchase and sale agreement does not include any requirements that Alexander and her partners work closely with the city.

But Alexander said she and her investors, whom she declined to name but said live in and outside the state, are committed to developing the whole site. “We feel we have a moral obligation to fulfill what we proposed,” she said.

The proposed project far exceeds anything Alexander has attempted previously.

In 2018, Alexander moved to Manchester from San Diego, where she’d lived for more than two decades, to be near family. In California, Alexander said she did “fix and flips,” selling residences and commercial properties she had renovated. Her largest project was consulting on a proposed 1,800-acre development in San Diego, she said. The owner chose not to pursue the project.

Alexander has purchased four development properties in New Hampshire and completed one, a seven-unit Hampton vacation rental property she bought in 2020. She also owns a former religious school in Manchester that remains undeveloped, and in August she purchased the former Kings Grant Inn in Gilford.

John Ayer, director of planning and land use in Gilford, said Alexander and a partner discussed with town officials their plans to restore the inn and create senior and market-rate housing. They have not yet submitted development plans, he said.

“They are go-getters and seem to be very sharp and capable,” Ayer said. “And I have nothing but confidence that anything they do will be an improvement for one, and provide something the town of Gilford stands in need of.”

The most ambitious of Alexander’s New Hampshire projects, a 60,000-square-foot residential and commercial development on Elm Street in Manchester, is nearly three years behind schedule. She calls it “Signature on Elm.”

The city planning board granted Alexander site approval to convert the dilapidated property into a multi-use building with about 30 apartments, possibly a restaurant, self-storage, and commercial units, in December 2018. She told the board she hoped to be open by January 2020 but thought March 2020 would be more realistic.

Alexander said two things derailed that timeline: Covid-19 and the realization that the contractor she had hired didn’t have the capacity to handle such a big project. She has requested two extensions and now hopes to be open in February. Alexander has dropped plans for a fitness center because another gym opened nearby. She has talked of putting a speakeasy in the basement and including a rooftop deck.

The delay led one investor to sue Alexander in Hillsborough County Superior Court.

In June, Horizon Trust, on behalf of Marie Ward, who invested $150,000 in the Signature on Elm project, alleged that Alexander had breached their contract. The lawsuit, which is pending, alleges that “after three years of stagnation,” Alexander failed to move the project forward or notify Ward of important developments.

After taking out a $2.7 million mortgage in 2020 and paying off those liens, more liens followed, according to the lawsuit. Ward is seeking undisclosed damages and compensation for attorney fees and legal costs. Horizon Trust has filed a $250,000 lien against Alexander’s Elm Street property.

The court has set a scheduling conference with the parties for Dec. 12. But Alexander said Monday that the parties have reached an agreement that will resolve the case by the end of the year. She declined to describe the negotiated agreement, and Ward’s attorney did not return a message.

Alexander said the $430,000 lien filed against the property by her first contractor was amicable. She said she declined to pay for the work he had done until he had bids for all parts of the job. When that took longer than expected, Alexander said the contractor filed a lien on the property to ensure he’d be paid for his work. She said she understood and has since arranged payment.

Alexander also disputed the lawsuit’s allegation that she intentionally kept information from Ward. She said correspondence from Ward was going to her prior address in California.