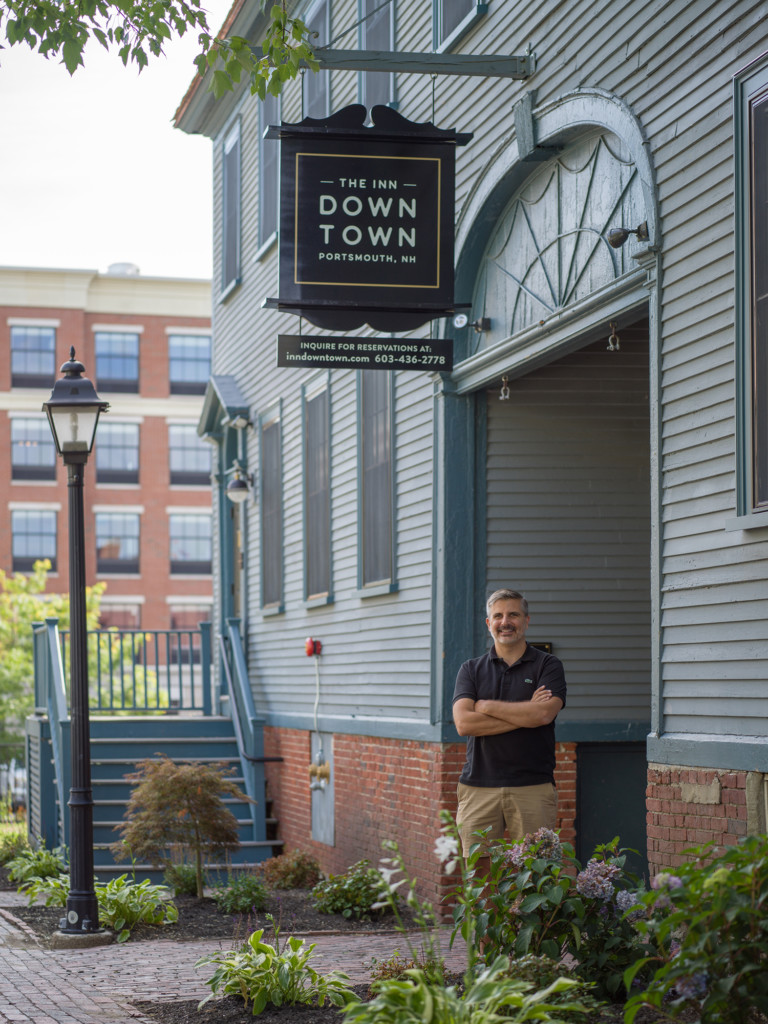 The historic Nutter-Rymes House in Portsmouth was transformed into The Inn Downtown. Doug Palardy likens apartment hotels to ‘elevated Airbnbs,’ where people can stay overnight, weekly, monthly or even longer without a formal lease. (Courtesy photo)

When Doug Palardy arrived in Portsmouth in 2008 to explore business opportunities, he was taken by the city’s “hip, vibrant vibe” that drew growing numbers of “cool people.” But when it came to accommodations, he found “a kind of void” and thought, “There needs to be something cool here. If you’re not staying at the Sheraton or the Hilton,” he added, “you’re staying at grandma’s bed and breakfast. There needs to be something cool here.”

Tackling the void, Palardy began by purchasing, renovating, operating and selling two hotels between 2008 and 2015. He turned the Bow Street Inn into the Ale House Inn and the Sise Hotel into the Hotel Portsmouth — between 2008 and 2015. Since then he has transformed two historic buildings into what may well be the first so-called “apart-hotels” in the state — The Great Island Inn in New Castle in 2017 and The Inn Downtown in Portsmouth in 2019.

The Ale House Inn was originally part of a brewery founded in 1871 where kegs of beer were stored and most recently served as a bed and breakfast. The Hotel Portsmouth, a Victorian mansion built in 1881 became a hotel a century later.

Both apart-hotels are housed in historic buildings, which underwent extensive renovation to serve their new use. The buildings were gutted to reconfigure the interior space and insure their structural soundness. Electrical, plumbing, mechanical and sprinkler systems were installed.

The Great Island Inn, built in 1820, stands next door to Henry’s Market Café, across the street from the Town Office at the heart of town and a short walk to the waterfront. Palardy recalled finding a three-story apartment building with a unit on each floor in “dilapidated” condition, with plastic shutters, aluminum siding, rotting windows and a failing chimney. Renovation included rebuilding the upper floor. The property offers guests a garden and patio for grilling outdoors. The cost of acquiring and renovating the building Palardy calculated at $240,000 for each of its units.

The Nutter-Rymes House, home to The Inn Downtown, was built in 1809 and is one of a handful of buildings original to The Hill, where other vintage structures were moved to escape urban renewal in the 1960s. The 2 1/2-story building consists of two identical halves riven by a carriageway beneath a bricked archway. It is the earliest urban building designed to house two families and is listed on the National Register of Historic Places.

Over the years the building was put to various uses, most recently restaurants, and renovation was extensive.

In reconfiguring the building to support living units a host of structural issues were overcome. Dormers were added to create living spaces on the top floor. Some original brick fireplaces were kept. Access and egress was realigned, with direct access provided to the ground floor units.

Palardy said the purchase and renovation represented an investment of $272,000 for each of the 10 apartments in the building, two suites on the top floor and eight studios on the two lower floors.

Apart-hotels, also called apartment, residential or extended-stay hotels, and in Europe “serviced apartments,” are buildings with multiple living units akin to studio or efficiency apartments that mimic “a home away from home.”

Palardy’s units contain kitchens with refrigerators, stoves, ovens, coffee makers and microwaves stocked with cookware, crockery and cutlery and equipped with washers and dryers. Other amenities include television, Wi-Fi, a minibar and secured parking.

Palardy, who studied theatrical and costume design at Bennington College in Vermont, managed the interior décor and furnishing of both hotels, lending each unit a character and ambience of its own.

“It doesn’t have the feel of a commercial property,” said Palardy, whose next project will be the restoration of a beachfront motor inn, vintage 1960s.

Units may be booked for overnight, weekly, monthly or longer stays without a formal lease. Some apart-hotels offer auxiliary services like housekeeping and laundry while others provide little more than keys.

Palardy said that the apart-hotel model hinges on what he called “invisible service.”

The relationship between innkeeper and guest is usually conducted entirely online. Units are booked online, preferably through the property’s own website or through Airbnb, Expedia, Booking.com, VRBO (Vacation Rentals By Owner), all of which charge a 15% commission.

Shortly before guests are due to arrive they receive a numerical code that opens the main entrance to the building. They take the key to their apartment from a box by the door and drop it back in when they leave. There are no desk clerks, bellboys or housekeepers on the premises.

“Can you imagine paying someone to sit here all day?” Palardy said, adding that the housekeeper who cleans the units after guests check out is his only employee.

“Humans are expensive,” he said.

Palardy hastened to stress that “if a guest wants something, all they have to do is call — anytime.”

Since the advent of Airbnb, he explained, more and more people, especially those in their middle 40s and younger, increasingly prefer to travel independently. And, he said, they all carry smartphones in their pockets or handbags.

“We’re happy to tell them where to get the best sushi,” he said, “but they’ve often already checked out the restaurants and made their reservations.”

Palardy likened apart-hotels to “elevated Airbnbs,” noting that many travelers are most comfortable staying in a space of their own rather than in the company of their host and in the midst of their belongings.

“I never see many of our guests,” he said.

Rates vary with the seasons and length of stay, from as little as $120 a night in the winter months to more than $400 during the peak summer season. Palardy said that during the off-season, units have been let for a month or more to individuals working in the area on short-term contracts. Likewise, people have taken units while searching for a permanent home on the Seacoast or having their property renovated. Rates for stays of a month or more match rents for comparable apartments in the city.

Palardy expects the apart-hotel model, marked by lean payrolls and low operating costs, to gather momentum, especially in communities like those dotting the Seacoast and countryside of New England, which have long drawn visitors throughout the four seasons. In particular, he expected apart-hotels to displace traditional bed and breakfasts, which have become encumbered by regulations requiring significant investment to comply with higher standards of food preparation.

Palardy recalled that working in a restaurant as a teenager followed by a longer stint in retail sales left him with “a making-people-happy sort of thing.” When, to the dismay of his customers, he left Motley’s, his menswear boutique in Boston’s South End, for Portsmouth, The Boston Globe reported that “there’s a sense of community in his store, and people consider him a friend.”

And despite his “invisibility” at the apart-hotels, reviews posted by his guests attest he has lent that same touch to his role as an innkeeper.