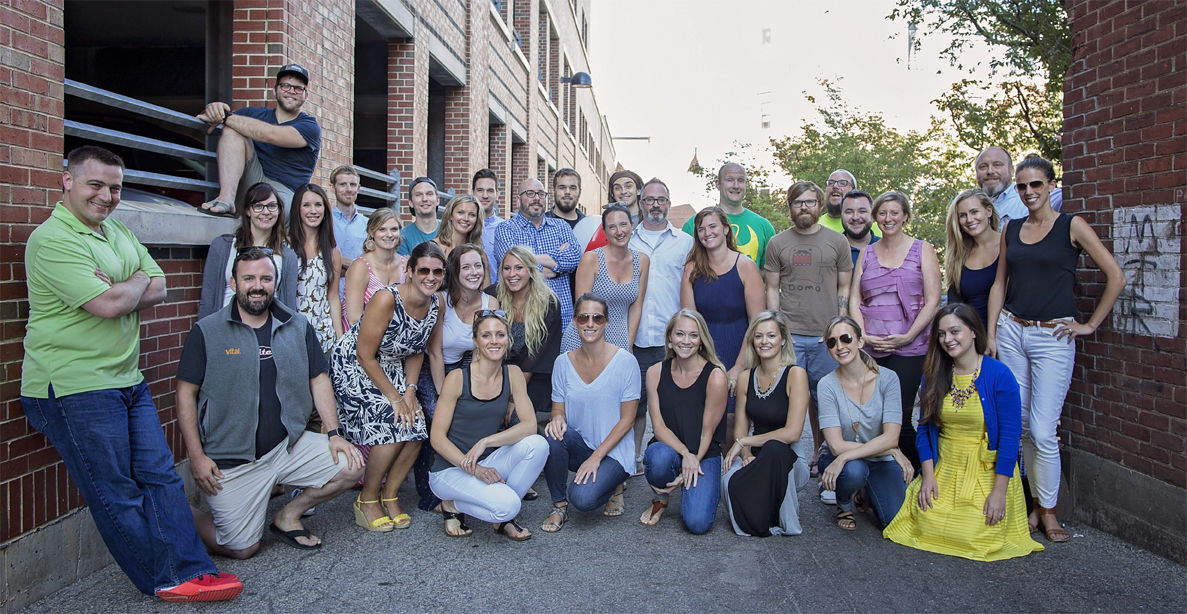 Vital Design’s team outside of their Portsmouth office. Vital’s staff has doubled over the past two years, mainly from adding millennials.

When Marlana Carroll ap­plied for a position at Vital Design in Portsmouth, the process included a step she didn’t expect: a happy hour with her potential future coworkers.

“I definitely could tell you everyone who works here and what are some of their hobbies,” said Carroll, who has been work­ing as an inbound consultant at Vital since April.

That “social interview,” as Vital calls it, is just one way the marketing agency has adapted to attract young talent in a state where the median age is 42.

Vital offers unlimited vacation time, group outings, balloons and a gift certifi­cate to a restaurant on your birthday, two workout sessions a week with a personal trainer, a healthy meal prepared by a chef once a week, unlimited snacks in the office and other perks.

“It culminated because we started real­izing that focusing on our employees was getting a huge return on investment,” said Zac Gregg, Vital’s founder. “Vital has been around for 15 years; for the first eight to 10 years we weren’t nearly as successful as the last five years.”

About six years ago, the agency noticed its employee base was dwindling, said Gregg.

“We got down to about six people in a very short time, and we were still having a lot of success, and we said ‘what’s go­ing right here, what’s going wrong here and what do we want to be?’” said Gregg. “With the help of some really bright peo­ple, we knocked out a path to become a digital marketing agency.”

Vital’s team recognized it needed to at­tract young people who are avid readers of new information, active on social media and interested in digital marketing.

“It’s a very cool but hardworking environ­ment, and that cool aspect of things culti­vates the work and gets people excited to go to work, which I think is rare in some industries,” said Chuck McMahon, content manager at Vital, who is head of the “fun committee.” “And we get to work with cool clients, too, who give us creative freedom, and they like the culture we have.”

Vital has expanded significantly in re­cent years, growing 287 percent over the last three years. In 2015, it was listed at number 1,442 on Inc. magazine’s 5,000 fastest-growing private companies, with $2.1 million in revenue in 2014.

Over the past two years, Vital’s team has expanded from 25 to 50 employees, said McMahon.

“Seeing the resumes that pour in every single day, I can tell you there’s nonstop interest, from de­signers to copywriters,” said Mc­Mahon. “And to see kids applying from college, before they’ve gradu­ated, because they’ve identified Vital as a place they want to work, that’s just the testament to our growth and the cul­ture we have.”

“Everybody cares about talent,” said Russ Ouellette, president and managing partner at Sojourn Partners, a leadership coaching firm based in Bedford. “That’s a very big concern. And I think everybody does care about having a more balanced demographic; I don’t know anybody who doesn’t want that.”

But throwing perks at prospective em­ployees is not going to attract talent alone, he said.

“If you put a foosball table in the other room or build a gym, I don’t think that would create or change a culture,” said Ouellette. “Those things emerge from a culture. If it just happens to be the compa­ny supports well-being and healthy living, and they have employees that want to do that. I think that reinforces what the com­pany stands for.”

According to Ouellette, “Professionals all have values. Millennials like to be devel­oped. They want feedback. So I think we should focus on the working professional perks rather than the smoke-and-mirror perks,” Ouellette advises companies. 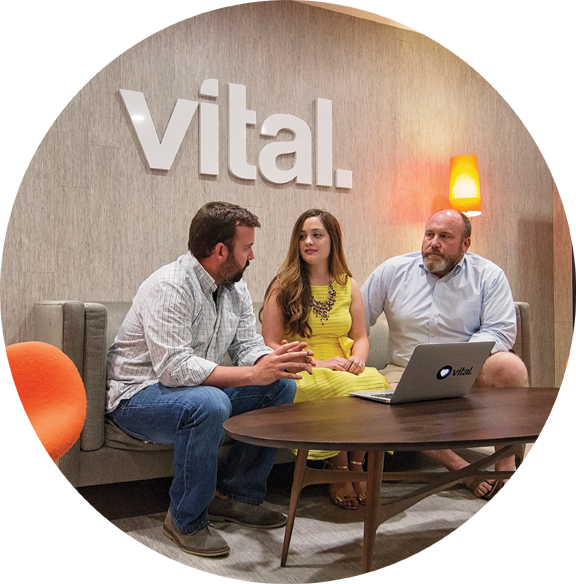 Some businesses may ask, how do companies like Vital find the time to work?

“As someone who reaps the benefits of that mindset, if we take an hour and a half at the gym … it’s not the situation where we’re rushing out the door at 5 p.m.,” said McMahon.

He said “there are a lot of people who stay later” to discuss their ideas or talk shop.

“If my boss is going to give me the freedom to work out in the middle of the day and have a long lunch, we try to give it back to him twofold,” said Mc­Mahon.

“It seems problem-solving is easier when you get to know your coworkers in a gym environment or social envi­ronment, so it’s easier to connect with people when you get back,” said Car­roll.

Vital takes a month or two to hire employees, with a phone interview and two in-person interviews with a group of about 10 people in management and future close-colleagues before the so­cial interview.

“We’re going to accept them as us and they can handle this type of re­sponsibility. The secret to offering this great stuff is to be discerning in who you hire,” said Gregg. “The type of people we have, they’re not going to take the four to five weeks of vacation unless you give them the incentive to. These are people who are highly com­mitted. They’re marketing nerds, and that’s the type of people we’re looking for.”

In turn, millennial applicants are look­ing for rewarding work.

“I wanted to work for the biggest brand ever when I was a designer,” said Will Powley, founder and chief creative officer at Mad*Pow, a design agency in Portsmouth. “I wanted to work for Coca-Cola because they were doing the coolest design stuff out there. I wanted to work for BMW. But as time goes, I think the mentality and ideas of a designer have changed now. It’s less about the notoriety and the logos in your portfolio and [more about] the stories around the engaging work you did.”

Founded around the same time as Vi­tal, Mad*Pow recently shifted its focus to become a “purpose-driven organi­zation,” said Powley.

“It’s kind of a trendy thing, but we tried to jump on it right away,” said Powley. “Our market position wasn’t focused on any specific industry, and we’re constantly trying to differentiate ourselves in the marketplace. For us, what we were realizing is to get stron­ger and to get the work we wanted we could narrow our industry focus. ‘Where could we make the most dif­ference in people’s lives?’ It’s more fo­cused on life goals for people.”

Mad*Pow has honed in on projects that aim to educate the population, whether it’s about becoming healthier or learning financial wellness, with an underlying theme of technological ad­vancement.

“When you tie those things togeth­er, market position focused on health care, finance and education, and doing purpose-driven work, you’re going to attract people because you’re trying to make an impact on the world,” said Powley.

Millennials are also interested in mak­ing an impact within their workplace, looking for opportunities to provide feedback and receive it.

Becca Deschenes started working at the Cranmore Mountain Resort in North Conway as a part-time ski and snowboard instructor while she was in school.

“After college, I became the events coordinator for two years and was promoted to the executive assistant to the president,” said Deschenes, who is now the director of marketing. “I would consider Ben Wilcox, who’s our general manager and president, my mentor be­cause he gave me the opportunity to get where I am now, and while I worked as his executive assistant, he let me pursue my interest in marketing and be hands on with that.”

After the then-director of market­ing left her position, Deschenes was promoted. She currently serves on the leadership team, nearly half of which is composed of millennials who have been promoted within the company.

“I think companies assume they’ll create a mentor program and assign younger people to older people or people who have tenure or people who are successful, and I think that’s a good start. But really, a preferred method of really getting a lasting mentor-mentee relationship, it should be co-mentoring. It shouldn’t be one way. And I think it should be self-selected,” said Ouel­lette, who recommended even a small group of employees meet for coffee outside of the office. 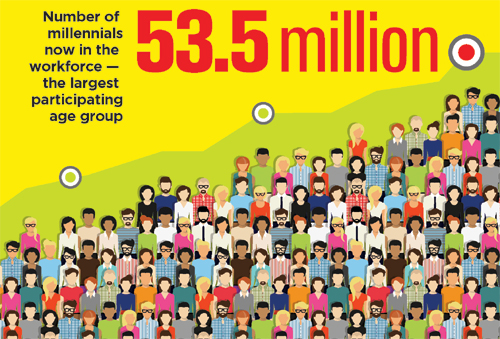 “We all need to learn to be good mentors. So I think companies can cre­ate mentorship training programs and places where they can get together and learn to do it well and practice it,” said Ouellette.

“You spend all this time hiring this person,” Gregg said, and then com­panies “typically invite them into the organization and forget to nurture them. They don’t have a good place to go, they don’t have an onboarding plan for them. We have the first few weeks of the new hire’s job mapped out,” said Gregg.

W.S. Badger Co., Inc. in Gilsum prides itself on re­sponding to employee feedback.

“A lot of our unique pro­grams are employees re­questing or making a sugges­tion that this would make their work-life balance this much bet­ter,” said Deirdre Fitzgerald, mar­keting and PR manager at W.S. Bad­ger.

In 2011, Badger established its Ba­bies-at-Work program, which allows new moms and dads to bring infants with them to the workplace. A couple of years later, at employees’ request, it created a childcare facility in Badger’s former building, located down the street.

“It’s an open communication and ev­eryone has a voice, that’s part of our mission, everyone has an opportunity to speak up and the leadership team is very proactive in responding too and accommodating suggestions by em­ployees wherever it’s possible or fea­sible,” said Fitzgerald.

According to Ouellette, companies are “intuitively trying to understand what’s really important. My response is talk to your people and see what they really want and experiment” when it comes to work-life policies and perks.

The bottom line, said Gregg, is to pay attention to who you’re bringing onto your staff.

“Everyone says they could do it, but it wouldn’t work for them, and there is some truth to that. I’m not sure, if I wasn’t forced at that cross roads, if I would have implemented this system. The problem is they haven’t hired cor­rectly. They have a lot of people on the fence they don’t buy into and they don’t trust. That’s where we are lucky. We had an opportunity to rebuild and not many people get that opportu­nity.”