Lawyers are divided over proposed process for settling claims 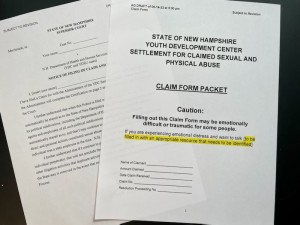 Attorneys on opposite sides of settling sexual abuse claims against the Catholic Church 20 years ago now fiercely disagree over the state’s proposed plan for settling claims from hundreds of people abused while at the former state Youth Detention Center.

In a July 29 letter to Attorney General John Formella, attorney Chuck Douglas, who represented church abuse victims and now about a dozen YDC victims, blasted attorneys Dave Vicinanzo and Rus Rilee for calling the state’s proposed caps on YDC claims unfriendly to victims. The two represent more than 800 plaintiffs and have hundreds of cases in superior court rather than go through a settlement process they say will cheat and retraumatize victims by questioning their credibility .

In his letter, Douglas noted that when Vicinanzo defended the Catholic Church against sex abuse claims two decades ago, the church agreed to pay its victims far less than the state is offering YDC victims.

“The (objection) from David Vicinanzo and Rus Rilee is truly Orwellian,” Douglas wrote. “Since the 1990s, Nixon Peabody (Vicinanzo’s firm) has represented the employer of over 50 priests who beat, sodomized, and otherwise violated 100s of children who trusted men of God.”

Vicinanzo and Rilee sent Formella their own letter July 25 reiterating their complaints and concerns about the settlement process for months.

The dueling letters come as the Attorney General’s Office is scheduled to ask the Joint Legislative Fiscal Committee next week to approve its proposed settlement process, including how it investigates claims and decides what to pay claimants. Spokesman Michael Garrity said the proposed plan has been given to the committee and will be posted on its website once the committee has approved it.

Vicinanzo and Rilee have led a very public challenge against the state’s proposed process. Rather than use what they say is an invasive and unfair process, they have filed hundreds of cases in Superior Court on behalf of victims. Not all attorneys feel the same.

Garrity said the Attorney General’s Office has heard from at least six attorneys who are interested in representing clients through the settlement process and is seeing that interest increase.

Douglas is among them, and in an interview Tuesday he said some of Rilee’s clients have contacted him for help navigating the settlement process because they do not want to go through a long court fight. Douglas said some victims cannot wait years for compensation because they need money now for rent, child support, and other necessities. At least one of his clients is in jail and needs money for a defense attorney.

“They’re all definitely harmed by what happened, and it set some on a very bad and violent path,” Douglas said of the abuse. “It really took a troubled kid and turned him into a criminal, and that’s the sad part, unfortunately. A lot of them who are still incarcerated can’t wait and wait and wait.”

The Legislature’s $1.5 million cap for sexual or sexual and physical abuse and $150,000 for physical abuse are part of a $100 million fund it created this year aimed at settling claims more quickly and sensitively than the court process.

Formella told lawmakers the caps were in line with what was being offered in other cases outside the state. Child and abuse victim advocates, however, have joined Vicinanzo and Rilee in disputing that.

Douglas began his letter to Formella comparing the proposed settlement with what the diocese agreed to when Vicinanzo was representing it.

“As for … claims of arbitrary caps, lesser amounts were not a problem for Attorney Vicinanzo when he was defending the diocese for abusing children,” Douglas wrote. “… How times have changed on the road to Damascus.”

In an email, Vicinanzo said the payments to clergy abuse victims “reflected what was acceptable and viewed as adequate at the time, in the circumstances.” He estimated that with inflation, those amounts would be double today. And, he noted the state no longer has a statute of limitations on child sexual abuse litigation as it did 20 years ago, making it easier to now pursue older cases in court.

“Society in general has had a steep learning curve for two decades growing in understanding about the extent of long-term harm of child sexual abuse,” he said.

In his letter, Douglas agreed with Vicinanzo and Rilee’s complaints that some proposed payments, such as $200,000 for rape of a child, are too low. But he noted that the proposed settlement rubric increases payments based on the frequency of the abuse and number of perpetrators involved. And “aggravating factors,” such as a rape that leads to pregnancy or a sexually transmitted disease, would also enhance payments.

“If a plaintiff is 30, what if they have to wait until 60 for a trial? Is that justice?,” Douglas wrote.

Victims who have already filed a lawsuit can still submit a claim for settlement with the state if they put the court case on hold. If claimants do not agree to the settlements offered by the state, they have three options, Garrity said. They can negotiate for a higher amount; ask the to-be-named settlement administrator to choose an amount that resolves the difference; or withdraw their claim and resume their court case.