There are literary treasures to be found 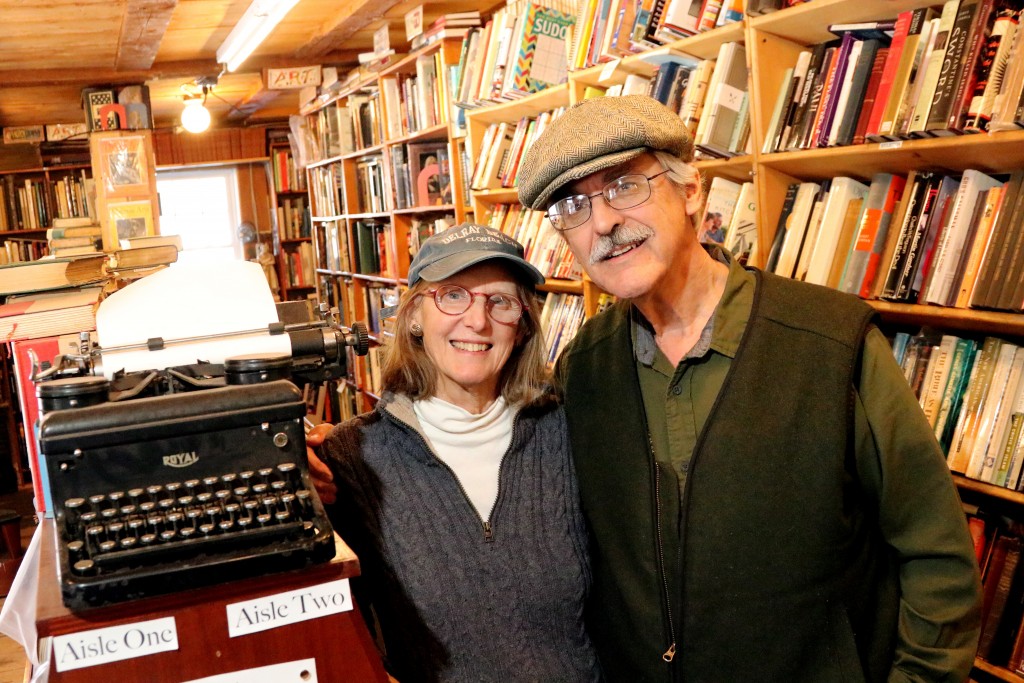 Vince McCaffrey and his wife, Thais Coburn, ran Avenue Victor Hugo Books for upward of 25 years in Boston before rent increases drove the bookstore online and finally to a barn in downtown Lee, NH. (Photo by Allegra Boverman)

There have been two highly significant finds of antiquarian books in New Hampshire in recent years, but a prelude is necessary.

While waiting to discuss the used book trade with Vince McCaffrey, owner of Avenue Victor Hugo Books in Lee, an excited customer entered the store and said, “Hello! Is Vic in?”

McCaffrey paused before replying, returned the hello, and dead-panned, “Vic is dead, but I’m Vince.”

The customer remained perplexed, perhaps expecting to find Victor Hugo himself penning a sequel to his 1845 masterpiece, “Les Miserables,” with a steel nib at the bookseller’s station. It’s easy for magic to happen in a used or antiquarian bookstore.

“I’m pre-modern and don’t fit into current sensibilities,” McCaffrey, the graying and handsome bookseller, explained. “I love a good sentence. It’s the delight of words.”

Avenue Victor Hugo Books was an anchor on Boston’s Newbury Street for upward of 25 years, but when a rent increase meant the store could no longer sustain itself, boxes were packed and warehouse space was found in 2002 by McCaffrey and wife, Thais Coburn, before continuing book sales online. It was a tough end for a bookstore that was regularly awarded Boston Magazine’s “Best Of” award for used bookstores.

“I’m so glad we opened the store here,” said McCaffrey about the decision to set up shop in Lee. “There’s no comparison to online bookselling. People remember the buying of the book as much as the book itself. I literally had an “Aha!” moment after we opened here. I had an appreciation of being a shopkeeper, of having rediscovered what I’d done.”

Avenue Victor Hugo Books reopened last October in a classic New England barn. It helped that the couple’s daughter and family had purchased the adjoining house.

In the old barn featuring beautiful wooden flooring and shelves and hand-decorated section signs transferred from the Boston store, McCaffrey spoke to the store’s extensive offering of classic magazines going back to the 1800s. “I grew up with Look, Life and the Saturday Evening Post. I discovered Harper’s Weekly as a child and felt like I was learning about the Civil War firsthand. Old illustrations took precedent over the art I was being taught in school.”

‘Little libraries’ debut in Manchester
Manchester Mayor Joyce Craig’s office, in conjunction with the Manchester City Library and Girls at Work, a nonprofit that fosters self-esteem in girls by training them in building skills, are rolling out 23 “little libraries” in public places throughout Manchester.
“We’re trying to break down economic barriers with the fine decision (no fines for overdue children’s books) that was implemented in 2018,” Manchester City Library Director Denise van Zanten said. “The little libraries are a free and fun way to further promote literacy around the city.”
The city library will initially stock the weatherproof stands with books donated to the library’s regular book sales, but the goal after that is to have any reader take or leave a title, holding a book dear or releasing a good read to the universe, in bookworm parlance.
Lauren Smith, policy and strategic outreach director for the mayor, cited Girls at Work as “a cause the mayor strongly supports. Girls at Work even made the mayor’s podium. The organization reached out to the mayor with the idea for the community libraries.”
Little libraries have been gaining in popularity both nationally and internationally. Nashua’s eight were put up in 2017.
“This will be a wonderful resource to children across our city, and I’m thrilled to be involved with this project,” Craig said in a press release.
“City Year and volunteers from a number of organizations pitched in on the Granite United Way Day of Caring to work on the little libraries,” said Beth Dever, Girls at Work’s executive director. The nonprofit serves approximately 800 girls per year, either at-risk or from low-income families, in several programs, said Dever.
Little libraries with in-ground cement bases have been installed at Livingston Park, Rock Rimmon Park, Emmett Park and at City Hall. The remainder will go up in the spring.

McCaffrey has literary battle stories that include sleeping in the back of his Boston bookstore for two years. His author’s bio, and he’s written 12 novels in recent years, starts with a humbling list of jobs before the finale: “I have chosen at various times to be a writer, editor, publisher and bookseller, but the one thing I am sure of is that I was very good at shoveling snow.”

When the conversation came around to New Hampshire book finds, McCaffrey recounted the 2008 story of John Kaag. The newly minted Ph.D. played hooky from an uninspiring Chocorua workshop on William James and, on a tip, sought out a building in Madison.

“The place was dilapidated,” McCaffrey said. “In a few more years, the whole thing might have been lost to the elements. The descendants had shown no interest in any of it.”

The building housed the collection of Harvard professor of philosophy William Ernest Hocking (1873-1966). Hocking had studied under such philosophers as William James and George Santayana, and Kaag discovered books with extensive marginalia penned by those philosophers, among others. Further treasures from Hocking’s West Wind library were first editions of both Rene Descartes’ 1649 work, “Discourse on Method,” and John Locke’s 1690 work, “Two Treatises of Government.” One of the seminal phrases for ponderers of any age — “I think, therefore I am” — was first unveiled in “Discourse on Method.” And Thomas Jefferson dipped liberally into his knowledge of Locke when writing the Declaration of Independence.

Melinda McGrath, co-owner with husband Gary of the Henniker Book Barn, New Hampshire’s oldest used bookstore, cut right to the chase when asked if there was an antiquarian book with a New England flavor that she’d love to obtain.

“Ever heard of Edgar Allan Poe?” she asked. “A copy of his first book, ‘Tamerlane and Other Poems,’ was found in southern New Hampshire.”

“Tamerlane and Other Poems” is the most valuable book in American literature, for reasons that read like one of Poe’s intricate tales of mystery.

Tamerlane was published in 1827 when both Poe and Boston printer Calvin S. Thomas were 18. Thomas, whose previous work was in broadsides and apothecary labels, had never printed a book before, and Poe had never paid a publisher before. According to the Edgar Allan Poe Society, 12 copies are known to exist, but somewhere between 20 and 200 are believed to have been published.

As Thomas left Boston in 1828, still waiting for Poe’s payment, did the publisher destroy the majority of the books his customer had expressed little interest in? After all, the byline on the 40-page booklet was not “E.A. Poe,” but “A Bostonian.” There was no publicity for the book. There were no reviews. Poe actually apologized for the booklet’s publication, saying his poetry was mediocre.

The copy McGrath is referring to was purchased from a box of farm tools for $15 at a New Hampshire antiques store in 1988. The buyer and seller remain anonymous, though McGrath dropped the clue “Antrim” into the conversation. The book was sold for $198,000 at a Sotheby’s auction in New York the same year. The seventh known copy, in better condition, was transported to Christie’s in New York by armored car. It sold for $662,000 in 2009 as the most recent “Tamerlane” to go under the hammer.

While waiting for “Tamerlane” to show up with your next Amazon order, McGrath has solid suggestions for creating a personal library.

“First editions are critical because the press runs can be small and the text is as the author intended,” she explained. “It’s not unusual to find copies either signed or inscribed by the author. Many have personal notes.”

McGrath used E.B. White’s “One Man’s Meat” as an example.

The 1942 book details daily life on a Maine saltwater fish farm — a considerable move in both distance and lifestyle from New York City’s literary sidewalks for the witty author. The store currently has a copy with an interesting provenance as it belonged to Navy Lt. Jaeger in the Pacific Theater during World War II.

“Lieutenant Jaeger wrote to White telling him how much he enjoyed the book,” McGrath related. “White’s reply on the author’s letterhead was glued inside the book by Lt. Jaeger and reads, ‘Dear Lt. Jaeger, I was awfully glad to get your letter about the book. I’m doing little enough for the war, and it’s so good to hear that I have given a little pleasure to somebody…’ ”

Small sea of literature that it is, Vince McCaffrey mentioned “One Man’s Meat” as a favorite New England book.

Here is a trifecta of New England-themed books worth physically scouting for once yard sale season hits:

2. An 1849 first edition of Henry David Thoreau’s “A Week on the Concord and Merrimack Rivers” ($7,500). Thoreau self-published the book, and at one point had stacks he had trouble selling to friends and relatives. This pricey copy is so beat up, it is described as having a “perished spine.”

3. Cranky poet Robert Frost didn’t like to sign his books, so anything autographed is a considerable plus. An inscribed first edition of his 1913 book, “A Boy’s Will,” given to poet Wilbur Snow, is listed online at $7,200.