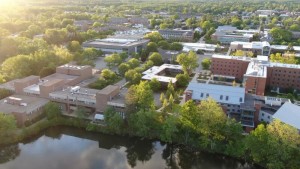 A letter of intent between Antioch and the University System of New Hampshire lays out plans for the graduate school to construct a new campus on Winchester Street land owned by Keene State College.

Pending a binding agreement and approval from the USNH board of trustees, the new Antioch campus could open by spring 2024, according to the release.

“We’re putting our students’ needs at the center of planning for our new campus,” William Groves, chancellor of Antioch University, said in a press release. “It will be an inspiring place for learning, collaboration and research.”

As Antioch’s student body has grown, so has the need for additional space. In June, Antioch sold its campus at 40 Avon St. to Monadnock Family Services, a nonprofit community health center, and will lease back a portion of that building until construction of the new campus is completed.

The two-story building, planned to be built on Winchester Street, will replace two Keene State residence halls — Monadnock and Randall — that are no longer in use, officials said. The 40,000-to-50,000-square foot structure will house instructional space and connect to the Blake House, a Keene State property that will be renovated for Antioch faculty and administrative offices.

Groves said in a phone interview that the move to downtown will make the graduate school more conspicuous while also allowing it to forge stronger connections with Keene State College.

“We’re going to be at a much more visible location at the corner of Winchester and Main Street,” Groves said. “It will feel more like a college campus because it is part of that college campus, instead of just a standalone building.”

One of the advantages of the new space — which is still early in the design phase and will take at least a year to 18 months to construct — is that Antioch will be able to house students on campus in Keene for the first time, Groves said. With the rental market in the city so limited in recent years, students have had difficulty finding housing, he said, but the new building will offer about 20 apartments for Antioch students.

The graduate school, which offers master’s and doctoral degree programs in counseling and therapy, education, environmental studies and psychology, could offer fast-tracked programs in collaboration with Keene State in years to come, Groves said. Students could earn a bachelor’s degree from Keene State and a master’s from Antioch while also potentially sharing amenities like library access and food services with the college, he said.

Melinda Treadwell, president of Keene State, said that the proximity and ease of transition makes good business sense for both Antioch and the college.

“We’ve learned a lot about the power of partnerships that can result from this kind of colocation,” Treadwell said. “More than anything, the move enhances opportunities for students, academically and socially.”

Once the new Antioch building opens, Groves said, “students will know from the day they step foot on Keene State campus they have the option to get a master’s degree.”