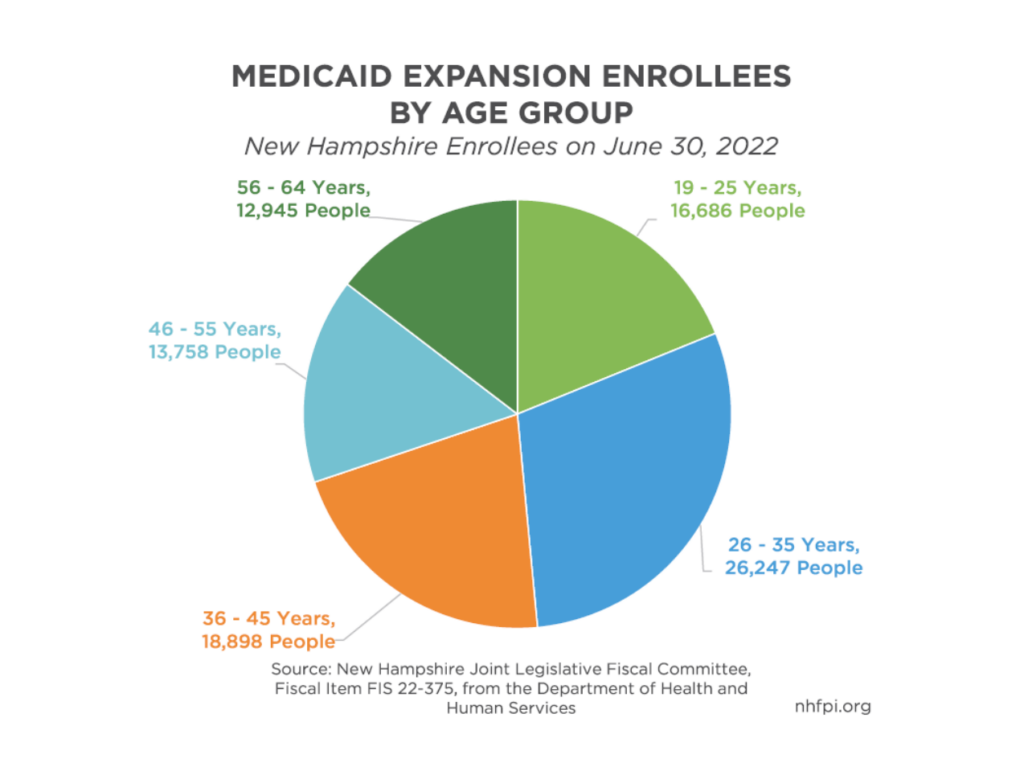 Expanded Medicaid’s Increased payments to the state for inmate care saved the state $10.2 million between 2015 and 2021. (NH Fiscal Policy Institute)

Lawmakers must decide this year whether to continue spending millions each year to provide an estimated 50,000 to 90,000 additional low-income people Medicaid health coverage through its Medicaid expansion program. The NH Fiscal Policy Institute, which lawmakers have long looked to for nonpartisan financial analysis, released a report this week with several arguments for doing so.

It has also allowed beneficiaries to get the health care they need to stay in the workforce, a plus for them and the state’s employers desperate for workers. Medicaid expansion has given the state’s hospitals millions of dollars to cover health care costs for uninsured people who would otherwise be unable to pay. It has lowered the state’s cost of health care for inmates, according to the analysis.

The question is, will that data persuade lawmakers to continue a program that drew skepticism before it was enacted in 2014.

Here are five takeaways from the institute’s analysis.

There was a 42.3 percent drop in the number of uninsured Granite Staters in the five years following the start of Medicaid expansion compared to the five years prior. Who has gained health insurance?

The newly insured live in rural parts of the state, and about half are under 45. About 74 percent of recipients are white and people of color are disproportionately likely to be Medicaid expansion beneficiaries relative to the overall population, the analysis found.

Like traditional Medicaid recipients, they are low income. But they don’t meet Medicaid’s other eligibility rules, which require someone to have a physical or developmental disability or be younger than 19, pregnant, or caring for children or other family members.

In December, about 154,000 Granite Staters qualified for traditional Medicaid, according to the state Department of Insurance. New Hampshire’s expanded Medicaid population in New Hampshire has traditionally been less than half that, about 52,000 people.

The expanded Medicaid population jumped to over 90,000 during the pandemic due to job losses and public health concerns that kept people home. That number is expected to drop as the state reviews beneficiaries’ post-pandemic employment and financial status.

Granite Advantage beneficiaries often work in low-wage or seasonal jobs that don’t offer consistent employment or health benefits. And they may enroll and leave the program as work becomes available.

The analysis found that to be particularly true in lower-wage industries such as retail, accommodations, and food service, among the state’s largest employment sectors.

Has a drop in uninsured adults made them healthier?

It looks that way.

There are additional indirect health benefits, the analysis found, when adults are able to work and don’t have the financial burden of health insurance. That includes steady access to housing and food.

The analysis includes research by the Kaiser Family Foundation on the impact of expanded Medicaid. It found a connection between expanding Medicaid and reduced mortality, including mortality during pregnancy or childbirth, and from some cancers, as well as heart and liver disease.

The analysis noted that states with expanded Medicaid saw a bigger decline in infant mortality than states without it. But it noted that research has not been conclusive.

The NH Fiscal Policy Institute found conclusive evidence, however, that tens of thousands of Granite Staters on expanded Medicaid used it for treatment in the last fiscal year.

More than 30,000 got mental health treatment and/or medication. Nearly 12,000 used their benefits for hospital stays, and more than 10,000 people sought treatment for substance use disorder. About 30,000 sought care for Covid-19, and nearly 64,000 people used their coverage at pharmacies. 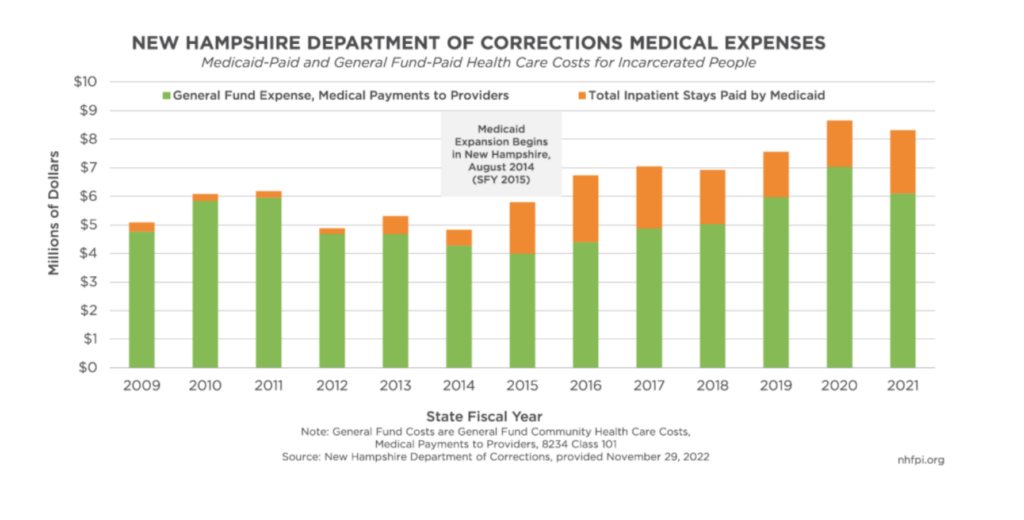 Expanded Medicaid’s Increased payments to the state for inmate care saved the state $10.2 million between 2015 and 2021. (NH Fiscal Policy Institute)

When hospitals treat a patient without insurance, they use their revenues and funding from the state to cover the costs. The state’s hospitals have seen those uncompensated costs go down since the start of expanded Medicaid, the analysis found.

It quoted findings from the New Hampshire Hospital Association showing the average cost of uncompensated care fell from $157 million across 2012-2014 to $65.1 million across 2017-2019. Those savings allow hospitals to remain open and avoid reducing services, the analysis found. That, in turn, helps maintain health care options for everyone. 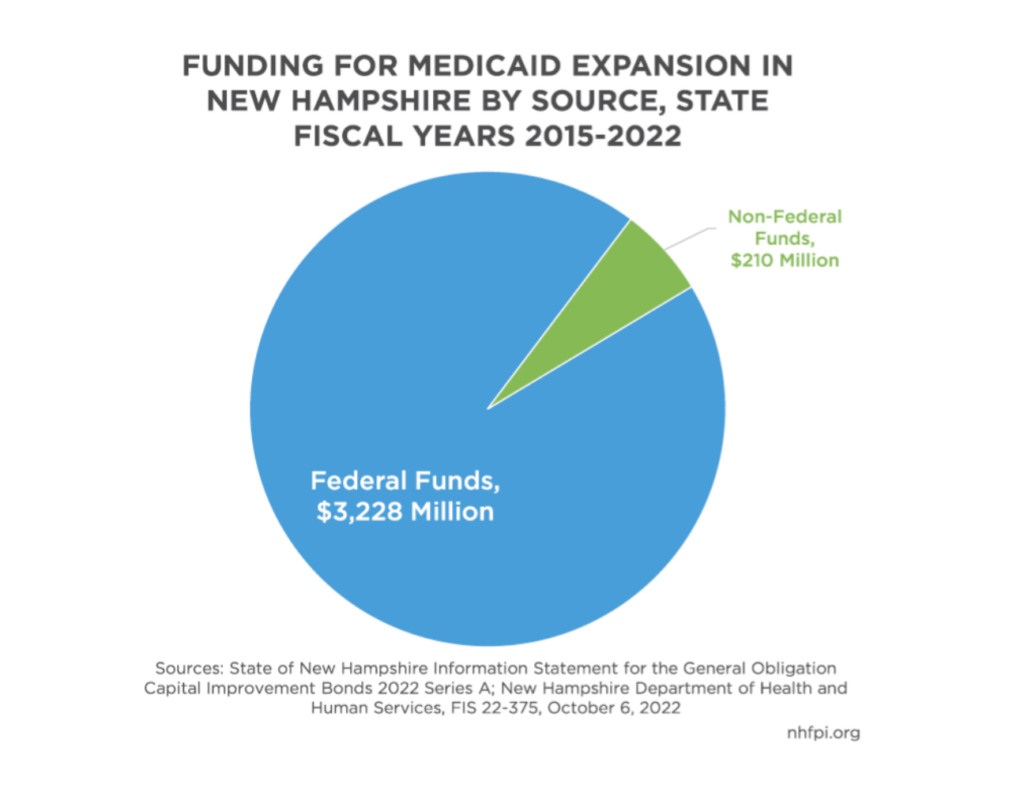 The federal government pays 90 percent of the cost of expanded Medicaid, which has traditionally allowed about 52,000 low-income Granite Staters who don’t qualify for traditional Medicaid to get heath care. (NH Fiscal Policy Institute)

Yes, the state has spent more than $200 million since 2015 on expanded Medicaid. But because the federal government picks up 90 percent of the program’s cost, it has seen a drop not only in what it sends to hospitals for uncompensated care but also what it spends on other services. That includes health care for inmates, the analysis said.

Traditional Medicaid covered just under 7 percent of medical care given to inmates by community providers. Expanded Medicaid’s more generous compensation has saved the Department of Corrections $10.2 million between 2015 and 2021, according to the analysis.

The state has been creative in covering its share of expanded Medicaid.

State officials emphasize that the general fund, which pays for nearly all state services, does not pay for Medicaid expansion. That’s technically true.

In 2022, insurance companies paid a significant portion, about $31 million, of expanded Medicaid costs. The state pulled just over $10 million from its alcohol abuse, prevention, and treatment fund, and $8.7 million from liquor commission funding to cover some of its cost. Most remaining funding came from the prior year’s surplus or money that had been refunded to the program.