After years of attempts, state gets a new and expanded net metering law 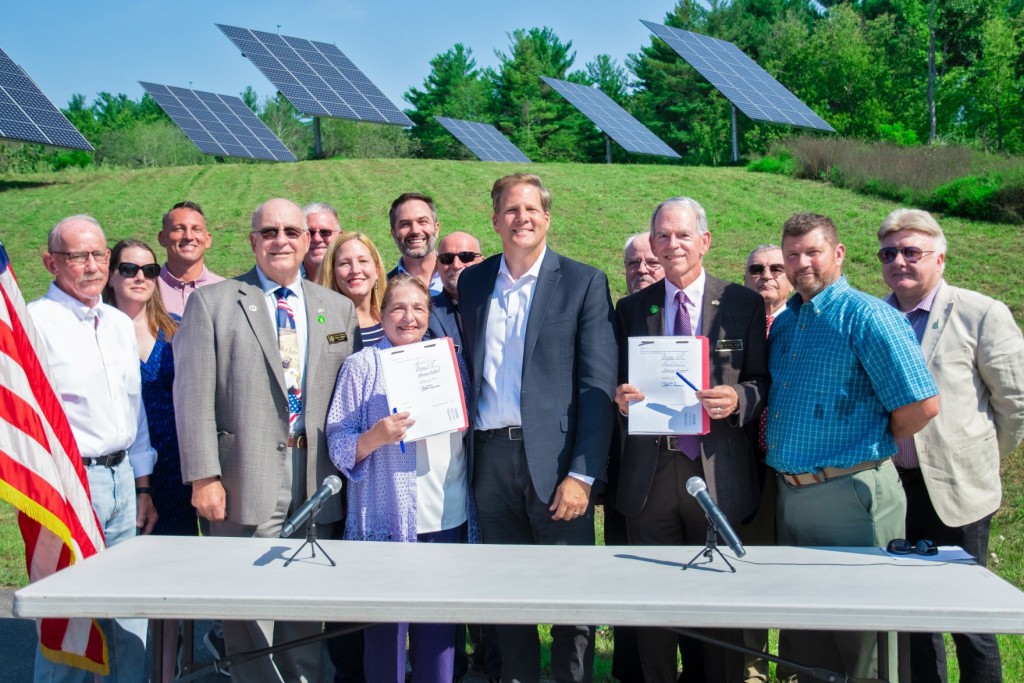 Gov. Sununu was joined by community leaders for the signing of the net metering bill.

It’s finally here: Expanded net metering is a win for renewable energy that advocates and lawmakers have been trying to finagle for years.

The bill Gov. Chris Sununu signed into law on Thursday is significantly pared down from previous attempts to expand net metering. House Bill 315 raises the cap on net metering from 1 megawatt to 5 megawatts, but only for arrays that are owned by “political subdivisions” in the state, like counties or municipalities.

The law requires that the array be located in the same jurisdiction that is doing the net metering. Proponents of the new law say it will spur the development of clean energy throughout the state when it goes into effect 60 days from now.

Concord, Manchester and Nashua are among the cities in the state that are poised to use the new policy to generate more green energy, according to Clean Energy New Hampshire. The policy has also been billed as a way of saving taxpayer dollars by defraying the electricity costs that participating municipalities incur.

The goal is that towns and cities will use this policy to meet their energy needs by using renewable sources like hydro and solar to generate electricity. Towns still won’t be allowed to net meter more than they use. For many towns in the state, wastewater treatment is the single biggest use of electricity.

The new law also includes a few technical updates for what’s called community power aggregation, where towns and cities can make decisions about how to procure power for themselves instead of receiving default service from an electric utility. While the enabling legislation for community power was first passed in 2019, towns and cities that want to participate are still waiting on rules from the Public Utilities Commission to move forward.

Some interested municipalities have joined together in the Community Power Coalition of New Hampshire, a non-profit entity whose members are pursuing community power. Six additional municipalities have joined the coalition since July: Dover, Warner, Walpole, Newmarket, Plainfield, and Cheshire County. The coalition now has 11 members, including Hanover, Lebanon, Exeter, Nashua, Harrisville, and Dover.