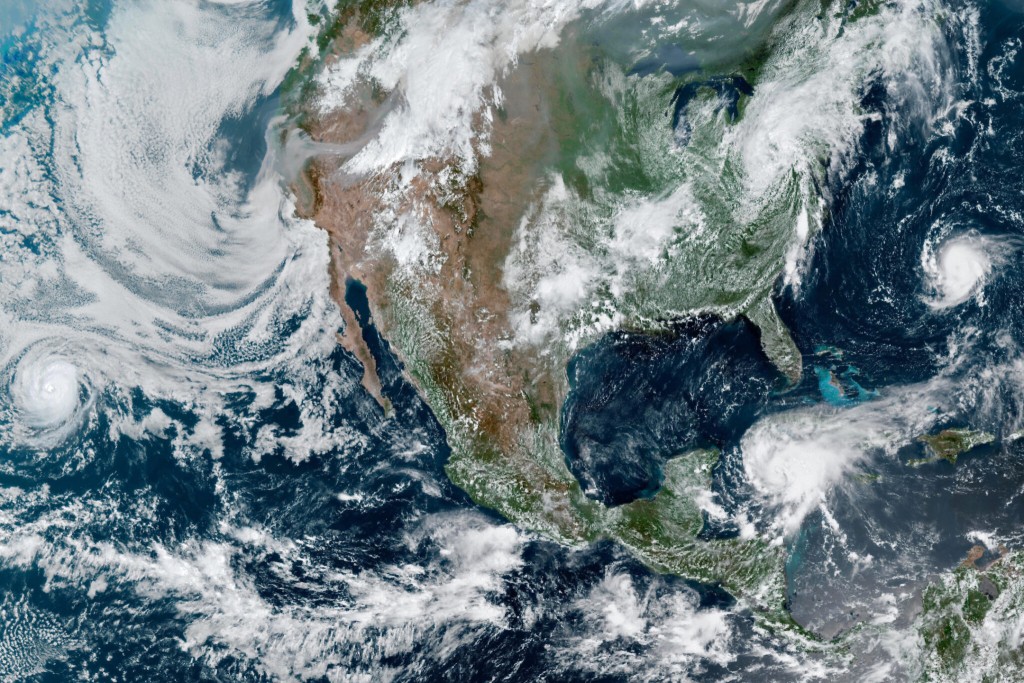 A satellite image of storms churning around North America on Aug. 18. (NOAA photo)

Growing up in New Hampshire, Elizabeth Burakowski remembers schools shutting down after getting inundated with snow. But now her own children are getting sent home for an entirely different reason: heat days.

School buildings aren’t built for the kind of heat New Hampshire has been experiencing. And hot days, especially when they climb to over 90 degrees, can be fatal for people who aren’t acclimated and don’t have access to air-conditioning.

That’s only one indicator of New Hampshire’s rapidly changing climate. Flooding, smoky skies, and drought are other instances of extreme weather conditions that will worsen as the environment continues to warm. Now, a new international report released by the Intergovernmental Panel on Climate Change is spelling out in no uncertain terms that climate change is here and that humans are responsible for warming temperatures on Earth.

“Unequivocally, the changes we are seeing are due to humans and human activities,” said Burakowski, a climate scientist at the University of New Hampshire.

The report’s findings are grim: Even conservative models show that the carbon dioxide humans have already pumped into the atmosphere means another 30 years of warming are locked in, regardless of efforts to decrease emissions.

For the Northeast, the report finds that increases in extreme precipitation are very likely. And there’s medium confidence that flooding from rainfall will also increase.

Cameron Wake, a UNH climate change research professor, said the report also clearly indicates that if business continues as usual, the number of extremely hot days in the state and region more broadly will also increase significantly. Those hot days can be lethal, and Wake said they will cause premature deaths, especially in a state like New Hampshire that isn’t well-equipped to deal with extreme heat.

And the state will also have to contend with sea level rise. “There’s a one in 100 chance that we might see 5 feet of sea level rise on the New Hampshire seacoast by the end of the century,” he said.

“The flooding we had in 2018 is going to be sort of a daily or weekly event with high tides because of sea level rise,” Wake said.

“I think those are the big three for New Hampshire: more flooding, more extreme heat, and sea level rise,” he said.

The dramatic increase in summertime heat means that we can also expect more short-term drought. Meanwhile, winter is already warming much more quickly than other seasons.

Residents of New Hampshire are experiencing some of these conditions now: in a lingering drought that started last year and has persisted in the northern part of the state; in severe flooding that recently hit Cheshire and Sullivan counties; and in the record-breaking June heat. July was actually a bit cooler than usual in New Hampshire, although globally there was record-breaking heat.

Burakowski hopes that as people start experiencing these extremes, it will translate into direct action to address the problem, as things like air quality from wildfires mean that parents have to worry about letting their children go outside to play. Air quality in New Hampshire declined significantly when smoke from wildfires out West and in Manitoba cloaked the state. The Department of Environmental Services told New Hampshire residents to limit strenuous outdoor activity to avoid harm from higher than usual levels of particulates in the air.

But while Burakowski is hopeful that attitudes will change, her research has highlighted one major obstacle: political affiliation.

In 2020, Burakowski and her colleague Lawrence Hamilton interviewed 1,200 New Hampshire residents to ask if they thought winters were warmer today than they were 30 or 40 years ago. Less than half of respondents answered that question correctly: On average, New Hampshire winters have warmed by 4 degrees since 1895.

Burakowski found that it didn’t matter whether respondents were skiers, how old they were, their education level, or sex. The biggest predictor of whether New Hampshire residents recognized warming temperatures had to do with their political identity. The study found that liberals and moderates are more likely than conservatives “to be aware of or acknowledge the warming trend.”

As a climate scientist, Burakowski said that result was both unexpected and disheartening.

“For winter, it’s a very vivid change in your landscape: when you see a change in a snow-covered landscape versus a brown, dull landscape,” she said. “I thought for sure that people would recognize that.”

They didn’t. And the conclusion Burakowski drew from the study was that this reality has nothing to do with science or facts, and everything to do with political affiliation.

The way climate change has been politicized has reverberations for New Hampshire residents who are dealing with it on the ground, too.

Jay Diener is vice chair of the conservation commission in Hampton, where he’s seen flooding get worse and worse since he moved there in 1998. More people are applying for emergency parking permits to park their cars out of the flood-prone areas where they live. People who have experienced flooding are worried about it, and, Diener said, they’re wondering what the future holds for them. But he said talking about climate change is off the table because he knows it will alienate people based on their political leanings.

“The reason I don’t talk about climate change is because it’s too politically charged a topic,” he said. “Because there’s a lot of people who have different opinions about the extent to which human activity causes climate change.”

Instead, Diener said he focuses on the effects of climate change. He can talk about flooding and how flooding is increasing.

His takeaway from the recent IPCC report had to do with sea level rise. “That causes some concern about what we need to do in Hampton, to make sure we are adequately protected,” he said.

In 2018, the town experienced severe flooding. And floods on the Seacoast are bad for the town’s economy, which is heavily dependent on tourists who come to the beach and businesses that are close to the coast. Diener said more and more residents are raising their homes on stilts.

Lawrence Hamilton, the UNH sociologist who worked with Burakowski on the 2020 survey, said that climate hasn’t always been a polarizing issue. He pointed to bipartisan environmental legislation in the 1970s.

“It was like apple pie,” he said. “Everybody’s for clean water, clean air, save the endangered species, and so forth. But there was a strong corporate pushback to that that made it an aspect of socio-political identity to be against it.”

But Hamilton said there is some hope that those identities can change in the future. For example, there’s not a big generational difference among Democrats regarding climate change. But among Republicans, Hamilton said, the gradient is sharp: “Older Republicans absolutely don’t believe in human-caused climate change and Generation Z really seems like they do.”

Hamilton said that for individuals who are convinced that climate change isn’t real, a report like the one released by the IPCC isn’t likely to change their minds. But it could sway some people.

If there’s any good news to be had in the IPCC report it’s that because the problem was created by humans, our actions will determine how bad things get.

“The bad news: We’re the cause of the change,” Wake said. “The good news is because of that we can actually slow or stop this if we decide to do it, and frankly, now’s the time.”

He called the report a wake-up call and urged everyone, “especially our politicians,” to heed it.

One advance that the report makes compared to previous studies is attribution science, where climate models are used to link warming temperatures to specific events. This helps scientists understand how much precipitation in a storm was a result of the amount of carbon dioxide that is in the atmosphere, according to Wake.

Wake said that some of the defeatist reactions he’s seen to the report on social media are frustrating because our actions are the difference between “hundreds of millions of people suffering from heat waves or water shortages.”

“If we continue to ignore the problem, essentially what happens is that hundreds of millions more people suffer,” he said.

His policy pitch is to reduce warming as quickly as possibly by reducing greenhouse gas emissions.

“My hope is that this is the final wake-up call for humanity,” he said. “ We can no longer push this problem aside; we can no longer feel that somebody else needs to fix this.”

“We can and we do have the power to act on this,” Burakowski said. “Every action that we can take on a global, international, local, even regional scale can reduce the amount of warming. It’s still going to warm, but we can really reduce that. There’s power there.”