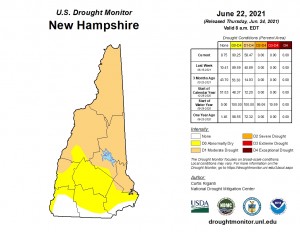 New Hampshire is on track to undergo its third multi-year drought since the turn of the century, with long-range forecasts placing the odds of escaping the spell of prolonged scant precipitation and warm temperatures at no better than even.

According to the U.S. Drought Monitor, which maps conditions throughout the country each week, while much of the state has been “abnormally dry” since the middle of April, the area in “moderate drought” jumped from 7% on June 1 to 58% by June 24, while another 31% of the state remains “abnormally dry.”

Moderate drought prevails throughout Strafford, Carroll and Coos counties, in much of Belknap and Grafton counties as well as in northern parts of Cheshire and Rockingham counties. Only the southernmost stretches of Rockingham, Hillsborough and Cheshire counties, along the Massachusetts border – less than 10% of the state, are currently spared from either moderate drought or abnormally dry conditions.

New Hampshire is in a belt of abnormally dry and moderate drought conditions that extends across northern New York, into Vermont and covers all of Maine, where a patch of “severe drought,” including Bangor and Skowhegan, sits in the middle of the state.

“Our message is, prepare for worsening conditions,” said Ted Diers, administrator of the Watershed Management Bureau at the New Hampshire Coastal program at the Department of Environmental Services.

When the state underwent extreme drought conditions in late summer a year ago, DES officials foresaw that without sufficient snowfall in winter and rainfall in spring drought conditions would linger for another year. In April, Tom Donovan, then director of the Water Division at DES, “said, We have not recovered from last year’s drought.”

Diers said that the deficit in rainfall has reached 15 inches, equal to a third of normal annual precipitation. Stream water levels, he said, are at historic lows while lake levels, which are managed by the state Dam Bureau, are at or near their seasonal norms.

And groundwater levels are below those recorded in the drought years of 2016 and 2020.

Diers said that light spring rainfall was largely taken up by sprouting vegetation, and since trees came into leaf and temperatures began to rise, loss to evaporation has increased. The result, he said, is that “it’s time to begin to be vigilant about discretionary uses of water,” he said.

DES has recommended water systems restrict outdoor water use. Currently, 74 systems in 42 municipalities, most of them in Hillsborough and Rockingham counties, where dry conditions are mildest but demand for water is greatest, have done so. Diers described low groundwater levels as “concerning” because of the risk posed to dug wells serving both water systems and residential properties.

Meanwhile, dry conditions appear not to have yet taken a heavy toll on the agricultural community. Agriculture Commissioner Shawn Jasper said that the effects of dry conditions vary from region to region and from crop to crop. He suspected that the drought last year stressed maple trees, contributing to a decline in the output of syrup this spring. Likewise, he said, orchards may yield smaller fruit if dry conditions persist.

On the other hand, Jasper noted that at Alvirne High School in his hometown of Hudson, where the Career and Technical Education Center operates a 100-acre dairy farm, the season’s first hay crop was exceptional. But he was less confident of yields in the Connecticut River Valley, where conditions are drier. He said that the impact on fields sown with corn needing an inch of rain a week may be mitigated by irrigation.

“We’ve had enough rain at the right time,” said Rob Johnson, policy director of the NH Farm Bureau Federation, who farms in Pittsfield. He said that while stream and groundwater levels are very low, what rain has fallen has been sufficient for crop growth. Moreover, he explained that drought-resistant varieties, along with investment in irrigation systems and farm ponds, have enabled large crop growers to compensate for any shortfall in precipitation.

Nick Rowley, field specialist with the UNH Cooperative Extension Service in Coos County, works with farmers to monitor and measure soil water. He said while there was enough rainfall to ensure the first cut of hay was “decent,” the longer dry conditions persist the greater the concern for the second cut. He noted the second cut carries livestock through the winter and is the more nourishing of the two. Low levels of groundwater and stream flows, he said, are the clearest signs of the drought, with the risks to wells the pressing priority.

Rowley, who lives alongside the Israel River, remarked “I can walk across it almost without getting wet, just rock-hopping.”