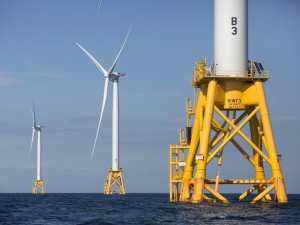 Offshore wind development in the Gulf of Maine could impact New Hampshire’s economy, environment and energy system, and the state’s new Department of Energy has released a request for proposals to find a consultant to help the state assess what those impacts could be.

Offshore wind development has produced controversy in other places. But the East Coast will likely see a major development of the renewable energy source in the coming years.

Though New Hampshire is likely years away from offshore wind deployment, Granite Staters have shown interest in its potential to create jobs and address the state’s impacts on climate change.

The Department of Energy, along with the state’s Department of Environmental Services, hosted an information session Dec. 2 on the RFP to select the consultant, drawing 25 attendees, according to NHDES. The chosen consultant will then produce an impact report. Funding for the report comes from the American Rescue Plan Act.

State Sen. David Watters, D-Dover, chair of the Commission to Study Offshore Wind and Port Development, said the report could provide information on how the development of offshore wind might impact New Hampshire’s economy, ports, fisheries and environment.

“This will give us a much better ability to plan for and to advocate for those things that can try to bring this industry to New Hampshire. And then most importantly is to make sure our environmental industries and our fisheries industry is protected as well,” he said, adding, “we’ve got to get going on this.”

Watters says New Hampshire will need to take multiple tracks at the same time to make progress on offshore wind.

New Hampshire has lagged behind other states in both its standards for the amount of energy that electric utilities must get from renewable sources and in setting state policy on procuring offshore wind.

And though Gov. Chris Sununu has been a vocal supporter of offshore wind development, some advocates have called on him to do more — for example, sign an executive order telling utilities to invest in offshore wind energy.

New Hampshire, Massachusetts and Maine are part of an intergovernmental renewable energy task force focused on the Gulf of Maine through the U.S. Bureau of Ocean Energy Management. Sununu requested the creation of the task force.

Watters has led previous unsuccessful efforts to create a law requiring utilities to get energy from offshore wind. Watters has filed two bills for the next session he says would prepare New Hampshire for the development of the industry.

Kelly Buchanan, director of regulatory affairs at Clean Energy New Hampshire and another member of the Commission to Study Offshore Wind and Port Development, says she’s hopeful the RFP could be a step toward progress.

“This is an opportunity for the facts to go on the record, more than anything else,” Buchanan said

Republican Sen. Kevin Avard, R-Nashua, is also on the Commission to Study Offshore Wind and Port Development. He said offshore wind is an important opportunity for New Hampshire, but he isn’t sure the state needs more information before it acts.

“I think the time to study this has gone far enough,” he said. “I think we should move forward with this.”

Michael Behrmann, an offshore wind consultant based in Dover, said the study may provide important information for policymakers.

“The economic understanding has been relatively minimal,” he said. “I think this RFP will be able to elicit some more specific New Hampshire information that both our policy leaders, our legislators and others will be able to better understand.”

Even so, he said the budget for the study may only allow a consultant to produce a high-level picture of the issues.

“As seen in other states, significant dollars are invested in gaining more granular level data on how some environmental impacts may be addressed and or what impact energy the energy itself from these projects may have on our specific economy,” he said.

The Department of Energy will only consider proposals with a budget of $250,000 over the course of one year. Proposals are due on Jan. 7, 2022.