What to know about state’s reproductive rights laws 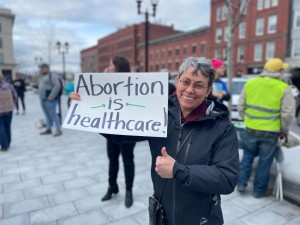 The U.S. Supreme Court appears poised to strike down Roe v. Wade, which guarantees a constitutional right to an abortion. While this outcome has seemed likely for months given the court’s conservative majority, a leaked draft majority opinion from Politico Monday night has made the trajectory even clearer.

The draft opinion led to protests Tuesday evening at the New Hampshire State House and elsewhere around the country.

Here’s what you need to know about New Hampshire’s reproductive rights laws and what effect the Supreme Court ruling would have on them if it becomes official.

What kind of abortions are legal in New Hampshire?

Abortions up to 24 weeks are legal in New Hampshire.

While an initial draft majority Supreme Court opinion obtained by Politico shows the court plans to strike down Roe v. Wade, this does not change the current abortion landscape in New Hampshire.

A bill is headed to Gov. Chris Sununu’s desk that would add an exception to New Hampshire’s current 24-week ban for fatal fetal anomalies. There is already an exception to the ban when the life of the mother is at stake. The bill would also remove the state’s mandate for ultrasounds for all abortions, only requiring it when the fetus is believed to be 24 weeks old.

Are there any “trigger laws” in New Hampshire that would kick into gear and limit abortion further if Roe falls?

No. If Roe falls, abortion will remain legal in New Hampshire.

At least 13 states have so-called trigger laws, which were passed to ban all or nearly all abortions as soon as the court allowed it. New Hampshire does not have any such laws.

Are there any laws in New Hampshire that protect abortion as a right?

No. Nearby states like Maine, Massachusetts and Connecticut have laws affirming the right to an abortion for pregnant people before the fetus is viable, at around 24 weeks. In New Hampshire this type of legislation has failed to move forward at the State House. Bills in both chambers remain tabled.

The state of Vermont may add abortion rights to its state constitution. Adoption of the measure will be decided on by voters in a statewide referendum this fall.

How are reproductive rights groups preparing for the potential fall of Roe in New Hampshire?

The news of the Supreme Court’s draft decision has added urgency to the work of reproductive rights groups and health centers, but it hasn’t come as a surprise. Those groups have long expected and prepared for the possibility of widespread abortion restrictions in the U.S.

Right now, they are focused on countering misinformation in New Hampshire. They worry news of the Supreme Court’s draft opinion may be warped by anti-abortion groups, leading some people to incorrectly think abortion services have become illegal.

If Roe ends, abortion access will fall further into the hands of individual states, so some groups are continuing to mobilize voters and legislators to add protections to the law in New Hampshire. Others are preparing for an increased demand for abortions in New Hampshire, if people in states with more restrictive laws begin traveling for the service.

Josie Pinto, executive director of the Reproductive Freedom Fund of New Hampshire, is working with similar funds across the country to plan for a variety of outcomes.

“In addition to thinking about booking hotel rooms, we might also get to a place where we’re asking people to open up their homes to people for the night and provide them a safe space,” Pinto said.

Planned Parenthood said they are already seeing some patients traveling to northern New England from Texas for abortions. Texas law bans all abortions after the detection of a fetal heartbeat at around six weeks.

What barriers exist in New Hampshire for people seeking abortions?

Abortion services are covered under many major insurance plans, although coverage can vary. People who are uninsured seeking abortions face additional financial burden. The Reproductive Freedom Fund of New Hampshire funds abortions for pregnant people in New Hampshire, and can also assist with transportation to an appointment. They can be reached via text or phone at 603-395-9078.

Josie Pinto, the fund’s executive director, said the starting cost of an abortion is roughly $500, but can escalate into thousands of dollars, depending on gestation period, health complications and travel costs.

New Hampshire Medicaid doesn’t cover abortions, except when it’s a result of rape or incest, or if the pregnant person’s health is in danger.

The Hyde Amendment prohibits states from using federal funds through Medicaid to cover abortion except in the cases mentioned above. It does allow them to use state funds for the process. In the New England area, Connecticut, Maine, Massachusetts, and Vermont do use state funds to cover other medically necessary abortions. Most did so due to a court order, according to the Guttmacher institute.

Laws and insurance are not the only mechanisms limiting access to abortion, according to Dalia Vidunas, the executive director at Equality Health Center in Concord. “Transportation and child care are some of the biggest barriers,” she said. “Most women that get abortions are already moms.”

Places to call/resources if you or a loved one is considering an abortion:

Planned Parenthood of Northern New England in Manchester and Keene