What’s the value of rooftop solar panels? A new study is helping NH find out 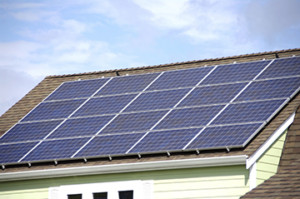 New Hampshire’s energy industry got the first look last month at a study that could guide how the state governs small-scale renewable energy generation, like rooftop solar panels.

Residents, businesses or municipalities that have small-scale energy resources can get compensated for the extra energy they feed back into the grid through net metering. And next January, the state’s Public Utilities Commission will begin a new proceeding to reconsider how to compensate those customers.

Currently, customers in New Hampshire who net-meter their power can get paid the equivalent of their utility’s default rate for the electricity, plus transmission charges and 25 percent of distribution charges.

Don Kreis, the state’s consumer advocate, said that was developed as a temporary mechanism to compensate customer generators, as the study on the value of distributed energy resources was completed.

But how much energy customers are able to net meter, and how they’re compensated for that energy, has long been a debate in New Hampshire. Previous efforts to expand net metering have been met with skepticism in the past over concerns about cost- shifting or the idea that some electricity customers being able to net meter their renewable power would raise electricity prices for other customers.

The PUC study both addresses the question of cost-shifting and provides a more concrete calculation of the value of resources that could be net-metered.

“This potentially could put to rest the argument that there is an unreasonable amount of cost-shifting going on here,” said Kreis.

Chris Skoglund, director of energy transition at Clean Energy NH, said the study also demonstrates “that distributed energy resources do provide value to the energy system in New Hampshire, and that, importantly, customers should not just be credited at the wholesale electric rates.”

Those calculations are based on the energy market before the most recent price spikes, and could change significantly as electricity rates skyrocket in the wake of Russia’s invasion of Ukraine.

Including environmental externalities, like the social cost of carbon dioxide and nitrogen oxide emissions, increases the value of distributed energy resources by up to 59 percent according to the presentation.

The Value of Distributed Energy Resources study will likely be a centerpiece of the Public Utilities Commission proceedings on net metering scheduled to begin in January. The final version of the study is expected to be released at the end of October.