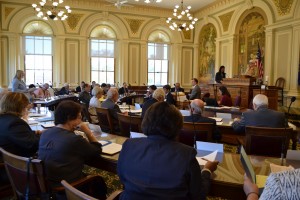 This year the New Hampshire Senate is working to combine most of their bills into roughly 30 “omnibus” bills.  Ideally, this will streamline the legislative process, since it eliminates the need for individual public hearings for each bill. But omnibus bills can be very long and complex.

While the Senate has yet to publish the omnibus bill texts, they released an outline of their plan. Here’s a summary of the bills Citizens Count identified as hot topics for 2021. We will update our website with detailed bill proposals as texts are published.

This bill appears to require employers to cover some Covid-19 testing and looks to establish a “Covid-19 relief fund.”  The bill also calls for “a Covid-19 needs assessment of nursing homes and long-term care facilities.”  Lastly, the bill has some other provisions related to how the state spends Covid-19 federal funds.

The bill could end up being a bit of a showdown between the Legislature and Gov. Chris Sununu, who has rebuffed legislators’ attempts to add oversight of his management of the coronavirus emergency.

This omnibus bill also dips into Covid-19 territory.  Once again, no details are public, but it includes a request “relative to health facilities providing care in the declared emergency.” It also includes something about nursing home standards, which could be coronavirus-related.

The bill goes on to address Medicaid spend-down requirements, automated pharmacy systems, and how information is shared under the prescription drug monitoring program.

Two other proposals in this bill look to establish programs related to substance misuse. One would establish a harm reduction and overdose prevention program.  The other would start a “rehabilitation bed pilot program.”

The five bills combined here may seem technical to the public.  They address who can work as an election official, recount fees, campaign finance statements and town meeting procedures.  Lastly, this omnibus bill would establish an “election information portal” that would let voters register and request and absentee ballot online. That part could prove controversial, given the heated debate around absentee voting in general.

All of the proposals here were requested by Sen. James Gray, R-Rochester.  Each one relates to the administration of elections.

The bill is clearly a response to the concerns around election security that came out of the 2020 election.  For example, the bill includes establishing a committee to study post-election audit counting devices.  The bill also establishes the early, partial processing of absentee ballots.  The Legislature passed a law that allowed early processing due to the large volume of absentee ballots during the pandemic, but that law expired at the end of 2020.

Seven bill requests are rolled into this measure, mostly aimed at small energy installations, particularly related to net metering. New Hampshire’s net energy metering program credits small energy generators – such as customers with rooftop solar panels – for the electricity they contribute to the grid.   There have been many attempts in recent years to expand eligibility for net metering to include slightly larger installations, such as those owned by municipalities.

This bill is named after Sen. Jeb Bradley, R-Wolfeboro, who requested all three bills in this package. It looks like he is still trying to expand the size of community solar projects and hydropower plants that can participate in net metering, although he has a narrower plan than the proposal above.

This bill includes various regulations related to the coastal environment.  It also addresses a statewide solid waste disposal reduction goal and prohibits the burning of PFAS.  Without any details yet, the bill also looks to address the Land and Community Heritage Investment Program and the state’s renewable portfolio standards. In general, you could say that this bill relates to conservation and environmental protection – but it also includes this curious bill request: “relative to the prevention of zoonotic disease transmission.”  Is this something about people eating bats and pangolins?  We have to wait and see.

There are 12 bill requests wrapped up in this omnibus package, and they are all over the legal map. One proposal relates to hemp, another to laser pointers, another to employer access to motor vehicle records. One proposal jumps out, given current events: a requirement for law enforcement officers to receive crisis intervention training.  There is no other omnibus bill that appears to address police misuse of force.

This bill relates to affordable housing, a topic of growing interest in the Legislature.  Sen. Jay Kahn, D-Keene, looks to be resurrecting a bill he sponsored last year that would allow municipalities to adopt a program for tax relief for repairs and updates of affordable older homes under the community revitalization tax relief program.

Two of these bills combined here would modify the eviction process, for example to permit rental assistance earlier in the process.  A third proposal relates to civil rights violations and discrimination in real estate transactions.  This appears to be the only bill in the Senate this year related to renters and landlords coming out of the coronavirus emergency.

This bill looks to address some of the issues around virtual meetings and the state’s “Right to Know” law. Governor Sununu issued executive orders that allow the government to operate virtually, but those orders are temporary.  For example, one of the proposals in this omnibus bill would specifically authorize towns and cities to have virtual meetings.

This raft of tax changes covers everything from lowering business taxes to decreasing filing fees for the Site Evaluation Committee.  Some of these changes will have to coordinate with the state budget process. Republicans and Sununu have made clear they want to prioritize tax cuts for businesses, despite last year’s tax revenue shortfall.

Citizens Countis a nonprofit serving the New Hampshire community by providing objective information about issues, elected officials, bills, elections and candidates. This article is being shared by partners in the Granite State News Collaborative. For more information visit collaborativenh.org.