Upper Valley restaurants team up to take on delivery apps 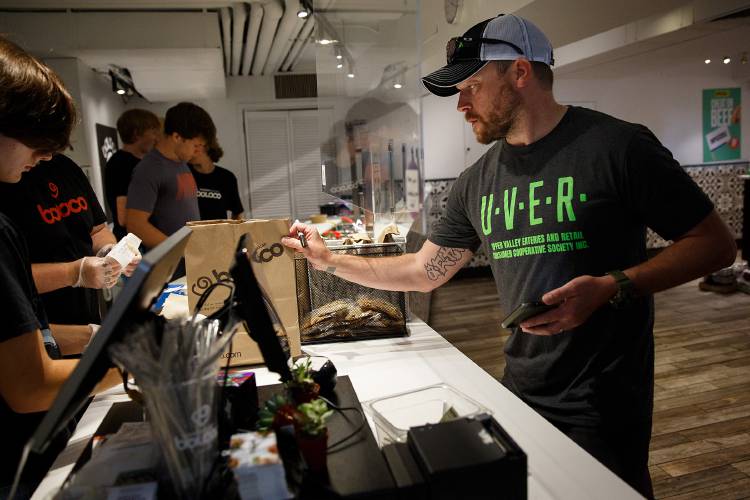 In what amounts to a David-versus-Goliath challenge, a new Upper Valley home delivery startup wants to deliver your lunch or dinner, groceries, dog food and a wide variety of other items purchased from local retailers directly to your door.

U.V.E.R., organized by a group of restaurant owners with involvement from Vital Communities and Upper Valley Business Alliance, launched July 6 in Hanover and hopes to enlist other businesses and extend its reach in the coming months, said Jarett Berke, owner of Lou’s Restaurant & Bakery in Hanover and one of the principal organizers behind the new delivery service.

“Small, local businesses are getting rolled over by these big companies like Amazon and GrubHub,” Berke said, citing two giants in the home delivery market. “We’re trying to make sure that doesn’t happen in our business and neighborhoods.”

The service, which has been in the planning stage for more than six months, launched on Tuesday with offers to deliver meals made in the kitchens of the three founding restaurants: Lou’s, Boloco and Murphy’s on the Green.

After home delivery of everything from prepared meals to diapers took off during the lockdown period of the pandemic, Berke believes changes in consumer behavior will be lasting and home delivery will become a service customers expect.

“Delivery is becoming like a public utility, and we want to have say in how it’s done,” he said.

‘Grow at a pace we can sustain’

The idea for U.V.E.R. — initials stand for Upper Valley Eateries & Retail Consumer Cooperative Society — was born out of Berke’s and other restaurateurs unhappiness with delivery apps such as GrubHub, DoorDash and Uber Eats, which take a cut of between 15% and 35% in the restaurant’s bill and squeezes restaurants’ profit margins.

The apps “add us to their platforms without our consent, they charge insane fees, they provide very little for their drivers and their customer service is terrible,” Berke said, adding the apps are “crushing independent restaurants.”

Further, he said, the food delivery apps’ long-term goal is to operate their own kitchens and push local restaurants out of business.

“Their strategy is to gain market share and then eliminate their ‘partner,’ ” he predicted.

Organized as a cooperative society along the lines of the Hanover Co-op, U.V.E.R.. is offering lifetime $25 memberships that will entitle members monthly perks and discounts — as well as member voting rights — although membership is not required to utilize U.V.E.R. service.

Nothing is for free, of course, and there will be a $6 delivery fee for deliveries within a 3.5-mile radius and a per-mile charge beyond 3.5 miles. The initial drivers will be freelance workers, but Berke said U.V.E.R. would like to hire employees who will perform various duties, including deliveries.

At this point, U.V.E.R.’s sole employee is Chris Acker, who was brought on in February as executive director while the service was in the early concept stage and will be in charge of day-to-day operations. Acker, a Hartford, Vt., native and 2000 graduate of Hartford High School, formerly headed sales at River Valley Club.

Berke said the strategy is to expand U.V.E.R. in “phases,” with the next area White River Junction, Vt., and then crossing back to West Lebanon. “This isn’t venture capital money. We’re going to grow at a pace we can sustain,” he said.

But the big step will come when U.V.E.R. goes beyond delivering for restaurants and enlists other businesses as well, including CSAs from area farms.

As envisioned by Berke, U.V.E.R. could deliver a household’s weekly farm share in addition to any other ad hoc farm purchases, enhancing locavore sales.

“The small farmer who wants to sell tomatoes or eggs direct-to-consumer can now do that 365 days a year,” Berke said about the service U.V.E.R. would provide. “No more middle men, no more waiting for a farmers market. We handle the marketplace and delivery; they worry about growing great products.”

The U.V.E.R. founders also hope to win the Hanover Co-op’s participation by delivering orders directly to customers’ homes. They’ve held discussions with the Co-op, although Co-op spokesman Allan Reetz cautioned there are many issues to resolve before it could sign on.

The Co-op, he noted, sells “tens of thousands of product,” including 4,000 local and regional products, and that presents a daunting challenge in creating an order platform, packaging and logistics.

“That is a big ‘menu’ from which to choose.” Reetz said. “A workable delivery plan can happen. However, questions — such as how, when and should we — will take many more conversations to answer.”

As a cooperative, Berke said the goal of the delivery service will be to cover its operating costs, but any profit would be returned to the cooperative’s members.

Ultimately, Berke said, the goal is for U.V.E.R. to become a “digital marketplace” through which all kinds of Upper Valley retail businesses can sell products that need to be delivered.

Critically, at the same time, an Upper Valley-based delivery service would keep money within the community rather than seeing it siphoned off to Big Tech firms that have bled the life out of countless small businesses, Berke explained.

“Money is leaving communities like ours and going to venture capital and private equity or public companies and into the pockets of the uber-rich. It’s no wonder that income inequality is a problem in our country,” Berke said. “This is one little poke at the system in an effort to try to keep some money in our community and keep local people in control.”