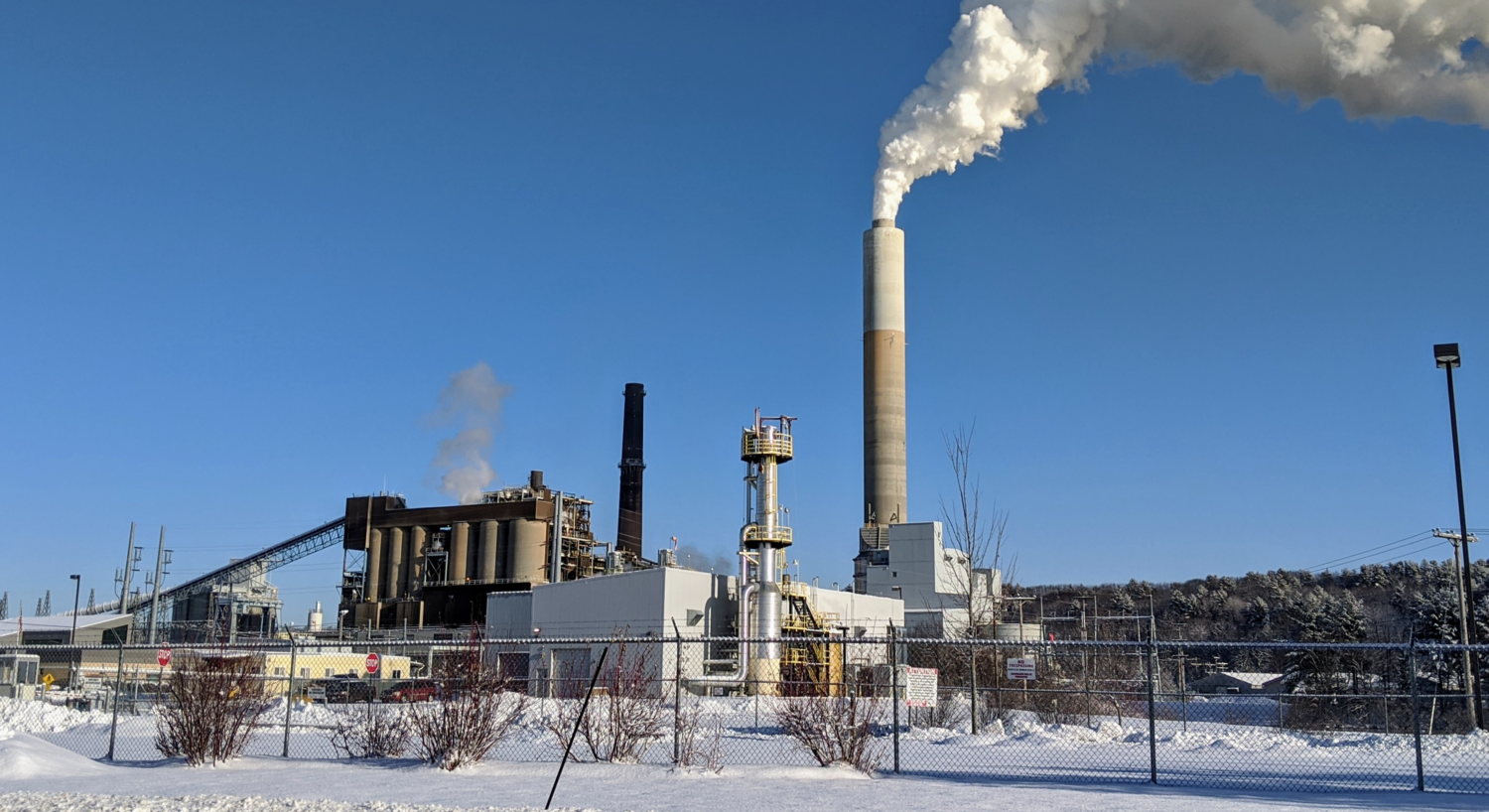 Merrimack Station billows steam while producing electricity with coal on the morning of Dec. 18, 2019, with temperatures in the upper 20s. (NH Public Radio photo)

Merrimack Station in Bow, built in the 1960s, is the last coal-fired plant in New England. The plant has a long history of serving the energy needs of New Hampshire residents, but in recent years the plant has come under fire by anti-coal groups who have called for its closure citing health and environmental concerns and the plant’s capacity has been reduced from 70 to 90 percent capacity in years past to only 10 percent today.

While Merrimack Station secured a three-year contract with the regional grid operator ISO-New England last February, utility advocates and anti-coal activists believe it is only a matter of time before coal-fired plants like Merrimack Station will transition to other forms of energy.

To understand Merrimack Station’s longevity as a coal-burning plant it is helpful to look at how power stations interact with regional grid operators like ISO-New England.

The plant is owned and operated by Granite Shore Power (GSP) and originated in the 1960s as a baseload plant, supplying a large, steady amount of electricity during a time when coal plants were relied on consistently. Since then, air pollution laws have become more strict and cheaper natural gas has boomed, making the Bow plant and others like it less attractive economically for ISO-New England, which owns the region’s power grid.

Historically, Merrimack Station operated at 70 to 90 percent capacity, but since a transition in ownership, the station now operates at less than 10 percent, consistent with its role as a “peaker plant,” meaning the station is only used during the hottest or coldest days of the year when the grid is stressed and in need of extra power.

When Merrimack Station joined the power grid, the Northeast had a number of large coal plants supplying power around the clock. In the decades following, the grid included new plants while also seeing the demolition of others.

Schiller Station in Newington, also owned by Granite Shore Power, began burning wood chips in 2007 and as of 2021 has not been in use, and Bridgeport Station, in Bridgeport, Conn., retired its coal operations in 2021.

ISO-New England, a non-profit corporation, ensures the region will have enough electricity to always meet demand. In order to deliver large amounts of electricity, the company awards contracts, also known as capacity commitments, to power plants so they can deliver electricity at peak demand times.

“The reason Merrimack Station is still open is because they receive these payments,” said Marla Marcum, co-founder of the No Coal, No Gas Campaign (NCNG), a coalition focused on ending the burning of fossil fuels in the New England region. “Power plants are paid a guaranteed amount to sit there and turn on when needed.”

For more than a decade, Merrimack Station has received capacity supply contracts to be available to produce 438 megawatts of electricity, the plant’s capacity, and it is through these contracts that the plant profits and remains in operation, Marcum said.

Granite Shore Power annually receives millions of dollars –– most recently $12 million in subsidies (“forward capacity payments”) –– set at auctions, and from electricity ratepayers across New England each February to be on stand-by through at least the summer of 2025, and these are awarded by ISO-New England according to Marcum.

The 16th forward-capacity “auction,” which took place in February 2022 to cover the capacity year beginning June 1, 2025, is for 310 megawatts. “This was a signal to us that [Merrimack’s] capacity payment was decreasing,” Marcum said, adding, however, that the word “auction” is a misnomer.

“‘Auction’ makes it seem exciting. It’s really just someone pushing a button and the algorithm runs until it gets what it needs and then they review things and announce what the results are,” she said, explaining that a plant’s bid is determined by how much money per megawatt hour they need to be available and online.

Marcum said she and others from NCNG met in late June with the director and deputy director of the Federal Energy Regulatory Commission’s Office of Public Participation to discuss the need for more transparency in the process.

“One of the problems with the way our grid operates in New England, and something we learned from the director of the office of public participation, is that our regional grid operator, ISO New England’s meetings are not open to the public,” she said.  “It’s a tough nut to crack. The reason for forward capacity auctions is to make sure we’ll have enough electricity at times of peak demand, but this is a market mechanism structured in a particular way and could be structured differently.”

Marcum said capacity auctions run completely on price and don’t include other costs associated with electricity generation such as the social costs which includes both economic and health related effects of continuing or discontinuing the use of coal to generate power.

“The contracts that are being paid out monthly this year for generators to turn on is paying out more than $2 billion to fossil fuel generators. That’s a subsidy,” she said.  “The main problem I have with this market mechanism is that it’s a subsidy and in my mind a subsidy is a public payment for a public good.”

Sate Consumer Advocate Don Kreis, whose office represents the state’s utility customers, said he is working with Marcum and other advocates around the region to pressure ISO-New England and FERC to make the whole system more transparent.

“The legacy interests are very entrenched, and so it’s a slow struggle,” he said. “[But] the arc of the moral universe is long and it bends towards transparency and accountability.”

Marcum summed the situation up by saying, “There’s an enormous amount of ratepayer money they don’t even know they’re paying that goes right into the pockets of the owners of these plants.”

“Imagine what could be built right now with guaranteed funding of over $2 billion. We could transition the grid to what we need it to be so it could be democratized, and the environmental justice communities are actually served instead of being left out again,” she said.

Merrimack Station has evolved over the years, aligning itself with the changing world around it.

According to consulting firm MJB&A, emissions data shows that Merrimack Station produced 238,000 megawatt-hours of electricity throughout 2017. This is about one-tenth of the amount of power it produced a decade ago and is roughly equal to the plant running full-speed for just 23 days over an entire year.

According to James Monahan, president of The Dupont Group & White Birch Communications Group –– a company that works with Granite Shore Power –– as it operates today, shutting down Merrimack Station would do little to reduce total emissions in New Hampshire or have any measurable effect on the climate.

“Merrimack Station emits less than 1 percent of the total CO2 emissions produced by all ISO-New England power generators annually – and has reduced its total station carbon emissions more than 95 percent since 2005,” said Monahan. “As recently reported by ISO-New England, the amount of energy from coal-fired generation continued to decline in 2020 (the most recent reporting period), decreasing by 67 percent to 0.2 percent of total generation.”

Yet the plant continues to emit as much CO2 in one hour as the average person does in 26 years, as was reported in the Concord Monitor. The Concord Monitor article titled, “Does the Bow power plant really emit more CO2 in an hour than I do in 25 years?,” came as a result of speculation around claims made by activists and protests in opposition to Merrimack Station. Activist Tim DeChristopher provided his calculations as to how this statistic formed, and in the end, the Concord Monitor’s fact check found the statement to be valid and concluded that while personal action is helpful and important, it isn’t enough.

Merrimack station underwent ownership transitions, starting with Public Service of New Hampshire, Eversource, and since 2018, the plant has been owned by GSP.

The shifts in power don’t stop there. Castleton Commodities, which owned 50 percent of Merrimack Station, sold its stake in Granite Shore Power to Atlas Holdings, a private equity and investment firm, in December 2021, according to a recent report from New England Power Pool, the region’s stakeholder advisory group. Castleton Commodities divested its interests in Merrimack Station due to a commitment to “achieve alignment with the United Nations Sustainable Development Goals,” according to the company’s website, leaving Atlas Holdings as the only major investment company responsible for keeping coal-fired electricity on the grid in New England.

A spokesperson at Granite Shore Power said Merrimack Station operates far less than it has in the past and “yet remains an important part of the ongoing transition to a stronger energy future in the region.” As for what an ongoing transition toward a stronger energy future might look like, the GSP spokesperson said: “[Merrimack Station] will continue to operate as long as the market dictates.”

Kreis said alternative forms of energy and other market forces driving the cost of energy will likely make Merrimack Station’s coal burning obsolete and this would be good news for Marcum and others that would like to see an end to the burning of coal.

“We’re entering an era where electricity can be stored in significant quantities,” he said, explaining the difficulties in the past of storing electricity as a commodity. “Electricity was and still is a really weird commodity because historically it couldn’t be stored like grain or other products and hedged against market volatility.”

Kreis said that once utility-scale battery storage becomes a reality, this should create more flexibility and Merrimack station will be converted completely to a different type of fuel. “I think it’s almost inevitable,” he said, adding that he doesn’t think the plant currently offsets people’s electric bills, which are some of the highest in the country.

“Merrimack Station only runs in times of high demand because it is relatively expensive compared to other sources of energy,” he said, adding that plants like this add to the high price of electricity in New Hampshire because of its high infrastructure costs as well as the transportation of fuel to New England and carbon purchases. “If it’s a choice between dispatching a plant like that and having the lights go out we want to be able to dispatch that station.”

Bow resident Katie Lessard, a high school student and team manager fellow at 350NH, said she does not believe that limiting the use of Merrimack Station is enough to ensure the safety of the community.

“We need to get to a point of transition away from this plant. An alternative is needed that stops polluting the community,” Lessard said.