Why it’s a day that all Americans should celebrate 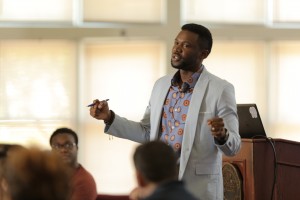 The U.S. Senate unanimously passed a bill making Juneteenth a federal holiday and President Biden signed the bill into law this week. The effort to formally recognize and honor the end of slavery in the U.S. has been in the works for decades and now it is finally a reality.

Since the end of the Civil War, America has whitewashed the history of slavery. There was a greater concern for the feelings of the defeated Confederacy than for the humanity of the newly freed slaves. As a result, the story of slavery has been sanitized and minimized. And that narrative is what I encountered when I migrated to the U.S.

My family and I fled the Democratic Republic of Congo in 1998 when I was 8 years old. The country was in the midst of a civil war, and there was widespread violence. My father was assassinated and my mother, fearing for her life, escaped with nothing but her four sons. We lived in a refugee camp in the country of Benin, in west Africa, for the next two years. Benin also happens to have been a major hub in the transatlantic slave trade. For many Africans, their last sight of Africa was the Benin shore from the confines of a slave ship. My own journey to America was a miracle. It was a second chance at life for my family.

My education on racial politics in America took years, but it began immediately, as my family settled in a predominantly white state. Many kindhearted people assisted my family when we first arrived. However, we were advised by other African immigrants how we should act around white people so we could be accepted and supported. They encouraged us to eschew certain aspects of Black American culture, such as hair braiding or cornrows, baggy clothes, hip-hop slang and rap music. The message was clear: whites perceived Black Americans negatively, and in order to make white people feel comfortable (and continue to receive desperately needed help), we had to distinguish ourselves from Black Americans as African immigrants.

This did not sit well with my mother. She had a great deal of integrity, and she knew that these recommendations did not align with her values. She bought my brothers and me the baggy clothes we liked and she allowed us to listen to hip-hop music (as long as it was the clean version), she let us dance hip-hop and even cornrow and braid our hair. She did not want our lives to be controlled by worry about how we would be perceived by white people. America continued to be a place of freedom for us.

Living in New Hampshire, I met other immigrants, but I had zero interactions with Black Americans in the first two and half years in America. That changed in the summer of 2002 when I joined a Christian Evangelist program called Joshua Generation. Each summer, we did outreach in inner cities all over the country. Joshua Generation brought me to New York City, Chicago, Boston, Philadelphia, Pittsburgh and Madison, Wis.

I learned a lot about the communities I worked with. The diversity and experiences of the people was inspiring and overwhelming at times. I would perform and tell my story in churches, community centers and schools. I was often treated with suspicion as one of just a few black people with a largely white group. People tended to open up to me after they heard my story of surviving the atrocities of the civil war in the Congo and my perseverance as a refugee in the U.S.

My experiences in the cities transformed my perspectives of Black Americans. I learned so much about their communities, including their challenges, successes and aspirations. I sometimes walked a fine line of insider/outsider status. We often visited areas that were described as the toughest or most dangerous neighborhoods. Our team was cautioned to not stick around after our programs ended. Some housing projects had multiple apartments with yellow “POLICE” tape over the doors from recent crimes. I was sometimes asked to wear my hat differently or take my durag off because a certain gang wore their accessories that way.

But music and dance served as integral points of connection. Every community I worked with had their own unique forms of expression. It was rich and authentic. In Chicago, I learned footwork. In Philadelphia, I learned about the Wu-Tang and SpongeBob dance, which you had to dance to Baltimore party music. I was eager to learn, and it often brought me closer to people because they saw my openness to their culture and community’s way of expressing themselves.

With these summer outreach efforts, I learned more about the Black American experience and the inordinate challenges they face. In Chicago and Philadelphia, I saw public housing complexes torn down to be replaced with high-end luxury apartments. Parents expressed their concerns about the poor conditions of the schools their kids attended, access to affordable health care, good-paying jobs that are closer to their home, gang violence and the negative impact of drugs. I came back to New Hampshire at the end of every summer with a new perspective and changed mindset.

My experiences with inner cities taught me about the present but not the past. It was not until I went to college that I learned Black American history.

Through the works of W.E.B. Du Bois and others, I started to fully understand the impact and effect of the dehumanization of Black people over 400 years. I began to see the racism built into social systems, political systems and educational systems. And I realized that I, as a Black man, was confronted with that history the second I set foot in America, regardless of the fact that I came here as an immigrant. It has shaped the way I am perceived and treated, and the very quality of my life as an American.

Slavery in the U.S. ended more than 150 years ago, but I live in its very long shadow, even as a new American.

Juneteenth originated in Texas two years after slavery was abolished. Black Texans felt it was important to commemorate the day for what it represented. Eventually the day became a national day of celebration, reflection, hope and inspiration.

And now it is a federal holiday. This is a day for all Americans to celebrate. Every one of us should acknowledge this date’s significance to the history of our country and its importance to Black Americans. If you value human life and liberty, this is a joyous day.

Deo Mwano, a business owner and community advocate based in Manchester, is principal of Deo Mwano Consultancy.

(Opinion) Stigma around mental illness needs to be dismantled

(Opinion) Harnessing the power of co-ops to feed the world