‘Trench warfare’: What an evenly split NH House means for next session

‘The next few years, it’s going to be like World War I,’ says one lobbyist 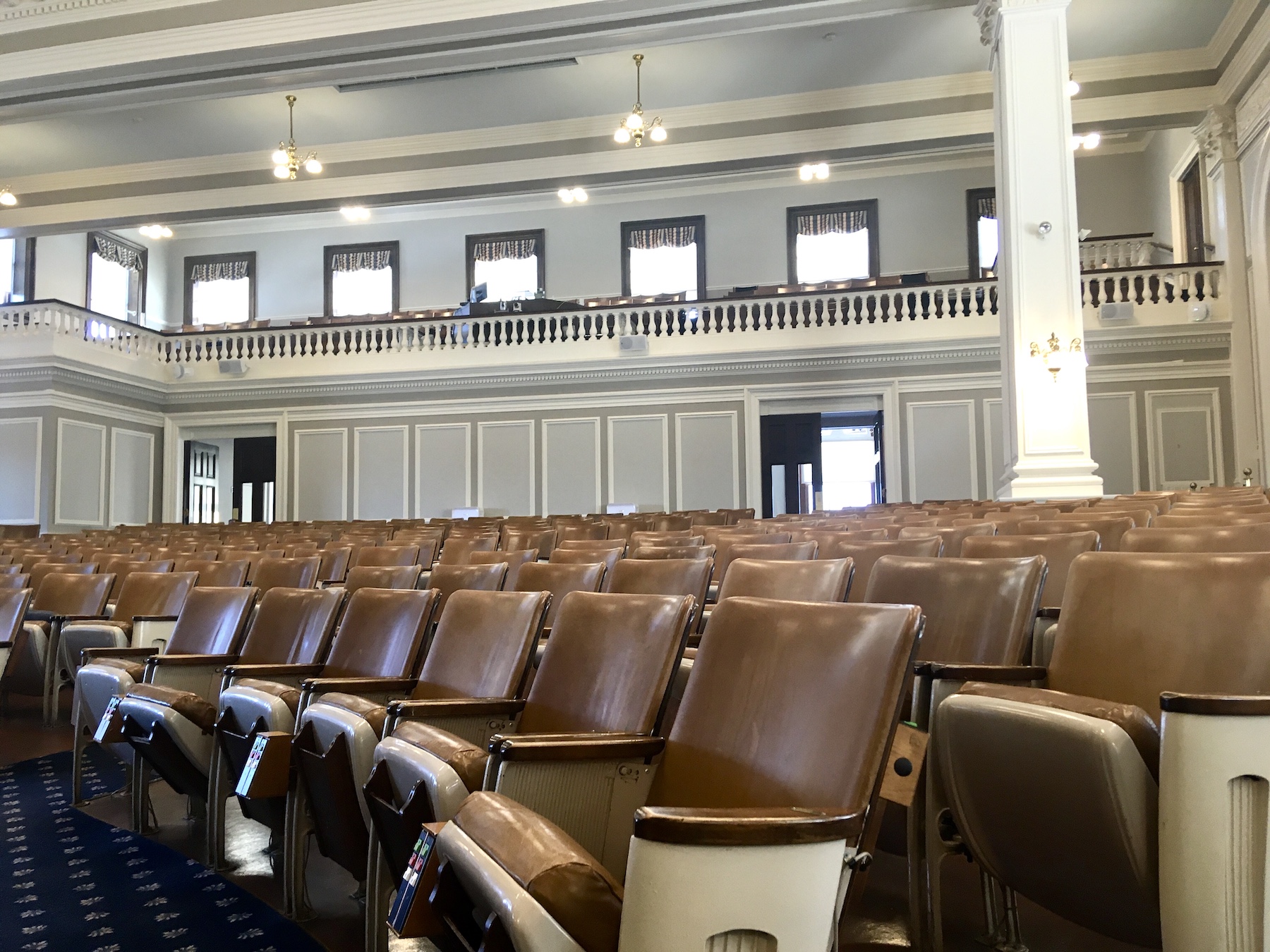 The party that wins the House may have a razor-thin majority on paper. But in practice, the outcome of bills is going to depend on how many show up to vote. (Ethan DeWitt/New Hampshire Bulletin)

Two years ago, when Republicans took back the NH House, the margin of victory appeared slim. Republicans won 213 seats to Democrats’ 187 seats, taking just 53 percent of the chamber.

But this year’s House elections have set a new standard for close elections.

With some races still being counted on Wednesday – and recounts possible – the House looked poised to be nearly evenly divided: close to 200 Republican and 200 Democratic seats. Republicans are projected to keep their majority. But when the dust settles, they might control the largest state legislative chamber in the country by just a handful of seats.

It’s a highly unusual dynamic for the 400-member House, which has tended to swing to the winning party decisively in recent decades. Since 2004, a typical majority has commanded between 40 and 80 more seats than the minority, according to Ballotpedia.

Now, lawmakers, lobbyists, and observers are struggling to process the tightly divided reality.

“The next few years, it’s going to be like World War I,” predicted Rep. Ross Berry, a Manchester Republican, “where both sides have dug their trenches and nothing gets across the no man’s land.”

Rep. Matt Wilhelm, a Manchester Democrat and a candidate to lead the Democratic caucus next session, had a more optimistic outlook.

“Everybody’s going to go to their corners and double down and fight for the values they believe in,” Wilhelm said. “But I think when it comes to the vast majority of legislation, I think there’s an opportunity to work together.”

A game of turnout

The party that wins the House may have a razor-thin majority on paper. But in practice, the outcome of bills is going to depend on how many show up to vote.

And in a 400-member volunteer legislative body, showing up is not always guaranteed.

“There is a bit of an attendance issue within the House of Representatives, which you can understand because they get paid $100 a year plus mileage,” said Anna Brown, director of research and analysis for Citizens Count, a nonprofit policy analysis organization. “It’s basically a volunteer position and it turns into more or less a part-time job.”

If 203 Republicans are elected, but 10 more Republican than Democratic representatives stay home on a given voting day, then Democrats can overpower any party-line vote and kill a bill – or possibly pass something else. The same could happen in reverse.

That prospect is not out of the question. In recent years, legislative sessions have seen about 30 lawmakers missing on average, noted Brown. Votes could be determined by which 30 members are missing on a given day.

“Even if you cut that number in half, let’s say 15 are absent on a given day, well, that’s a huge swing that is literally going to be the difference between majority and minority for either party on any given day,” Brown said.

With no “padding” for the majority party, getting as many members to show up for every voting day will be crucial. Berry said it will be a top issue that returning members will tell newly elected representatives in their party.

“That’s my message to them,” he said. “If you think you’re skipping session day, you’re on drugs.”

Even if every member were to show up to vote, the margins between parties will still be minuscule. That could give smaller, fringe factions more say over key pieces of legislation.

The narrower majorities could have the paradoxical effect of making legislation less bipartisan, Brown argues.

“We actually had a very narrow majority, relatively speaking, the past couple years, and we saw that rather than bringing bipartisanship to the fore, it gave a lot of power to the libertarian leaning right-wing Republican legislators who very successfully leveraged their voting power to get some of their priorities into the state budget,” Brown said. “So the narrow margin had the effect of actually creating a budget that was farther to the right.”

And with the space for error so slim, any member could be the spoiler vote. “Everybody has infinite leverage,” said Berry.

In order to shore up votes, the next House speaker and their majority team will need to be strategic. They may need to make concessions with more hardline members of their party to get something approved. Or they might attempt to find moderate members across the aisle who are willing to buck their party.

But those seeking to create those rebel factions will also need to be careful, Berry argues. Voting against key legislation too often could reduce the effectiveness of the threat.

Despite the precedent of the past two years, Wilhelm argued there was a potential for more collaboration between each, not less – and he predicted fewer ideological items would be added into the final product.

“There’s going to be an opportunity to work in a real bipartisan way instead of working with one party to build out the budgets,” he said.

In late February 2021, the House descended into chaos. Facing a vote on two abortion restriction bills, House Democrats, then in the minority, attempted a “walkout.”

Under the state Constitution, if fewer than two-thirds of the total 400 representatives – about 266 members – show up to vote, then each bill must receive at least two-thirds of support to pass. If fewer than half of the 400 show up, the chamber will not meet quorum.

Democrats attempted to take advantage of the slim majorities and get enough members to leave to throw off the vote. But not enough did leave to break the quorum, and Republican Speaker Sherman Packard used a parliamentary move to lock the doors and refuse to let those who had left re-enter. In the end, with only a few dozen Democrats still in the room, the bill passed 181-49.

Whether that tactic repeats itself next session is an open question for both parties, one that will come down to whom each party elects to serve as House speaker and minority leader, respectively. But with an even slimmer majority in store, a walkout this time around could pose a major threat to a bill.

Wilhelm declined to comment on potential tactics from House Democrats – including potential walkouts.

Brown says not to rule it out.

“It’s very rare, but if this is the tightest margin we’ve ever seen, it could get heated like that,” she said.

Another move that could be deployed against controversial legislation: tabling motions. With thin margins, the House majority party might find it more tempting to hold votes to send bills to the table – a move that freezes them unless and until they are voted to be removed from the table. It’s a maneuver that has been used more frequently in the past two years, Brown says, and one that could be tempting if turnout makes certain bills shaky.

But that tactic has its perils, too. After a certain cutoff date – typically around March – the necessary threshold for taking bills off the table increases to two-thirds. That means if controversial bills are tabled early in the session, supporters will face a time crunch to save them. The cut-off date will be set when the House votes on rules at the beginning of the next session.

Finally, the House speaker could amend the number of total voting days to account for turnout concerns. They could pile a number of major pieces of legislation into fewer days to consolidate turnout, or add more opportunities to vote by scheduling more days.

Despite the potential for gamesmanship and political alliances, the reality of a split House is likely to be more banal, some observers say. In the end, Berry predicts, few major pieces of legislation will make it through.

“I think, probably, they will make sure bills are as neutral as possible,” he said.

That’s not to say nothing will happen, he said. A majority of House bills in any given year pass on the consent calendar, meaning they are so uncontroversial that they don’t require a floor debate and are voted through by voice vote. Those bills – often seen as “housekeeping” efforts – will likely continue.

But a more reserved approach would be a change for House Republicans, who last session passed a 24-week abortion ban, a sweeping “education freedom accounts” program to allow public money to go toward nonpublic schools, and a “banned concepts” law barring certain lessons around race and identity in classrooms.

As for the biggest task for the Legislature in 2023, passing the two-year state budget, a narrowly divided House could mean anything is possible.