In New Hampshire, more than 5,000 employees have a stake in their companies through ESOPs 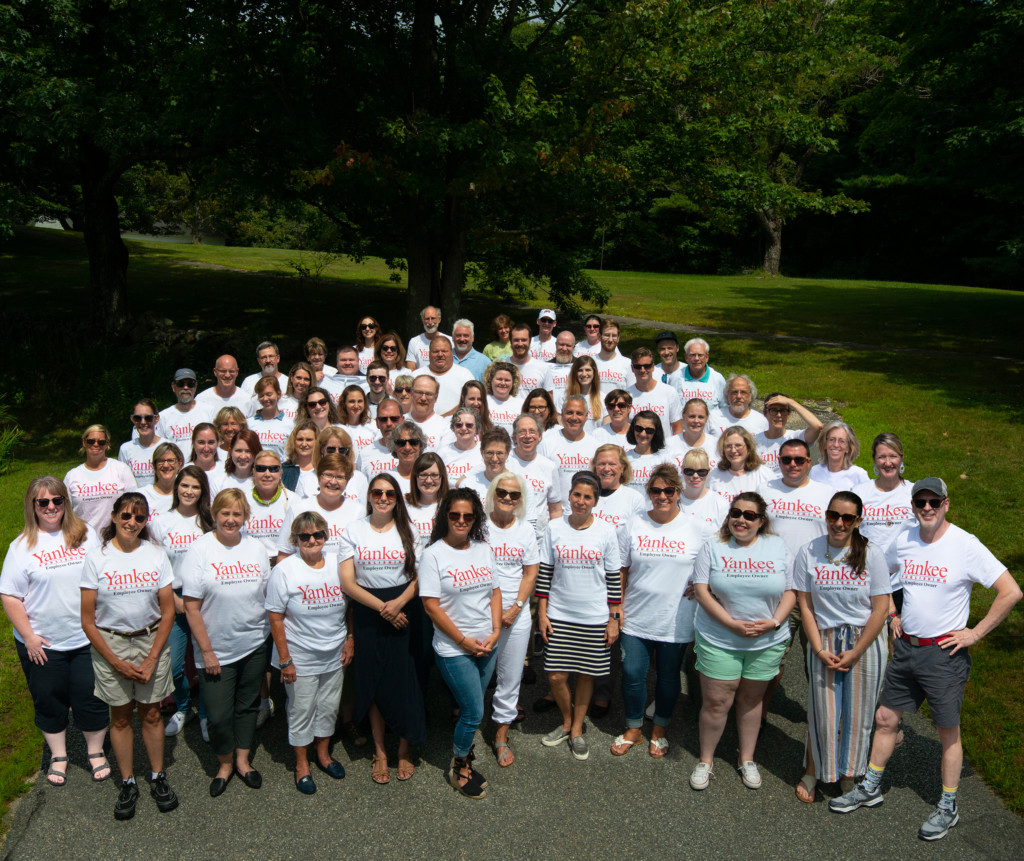 The employees of Yankee Publishing Inc. gathered in August to celebrate their new ESOP status. (Photo by Karen Bachelder)

Tossing cornhole, munching barbecued chicken and lining up at a free ice cream truck, the employees of Yankee Publishing Inc. were celebrating something new on a muggy Aug. 22 afternoon in Dublin: becoming owners of the company they work for.

While ownership of Yankee Publishing may have been a new concept to them, it’s not to others in New Hampshire.

The 17 family owners of the 84-year-old company decided to transfer a 30% stake in the business — which publishes Yankee Magazine, The Old Farmer’s Almanac, New Hampshire Magazine and the NH Business Review, among other publications — via an employee stock ownership plan, or ESOP. It will be the 30th such plan in the state, many of them decades old and one even dating back to 1985. Nationwide, there are 1.3 million employees in 5,500 standalone ESOPs.

But they are still relatively rare — only about a tenth of a percent of all businesses have them in the state and the nation.

What this exactly means to the 85 Yankee employees — besides the feeling of being an owner — won’t be known until they leave the company and cash in their ESOP shares, but in monetary terms, it could be a lot. Just take a look at the more than 5,000 other active participant-employees in the state.

They owned ESOPs with assets of nearly $1 billion at the end of fiscal year 2017, according to forms their sponsors file with the IRS. That comes out to nearly $200,000 a person.

That’s not what everyone will walk away with, of course. First some plans — but not most — have some substantial liabilities, particularly when first starting out, and there are expenses to run them. The employees would have to share that with the retirees collecting payments stretched out over years. And everybody’s piece of the pie is different — it is allocated through calculating such factors as years of service and percentage of payroll. Some employees may leave before they are fully vested, and others may retire before their shares are worth very much.

But payments are often substantial.

For instance, at Admix Inc., a Londonderry manufacturer that started its ESOP in 2000 and is now 100% employee-owned, most employees get payouts ranging from $40,000 to the low six figures, according to CEO Lou Beaudette.

At Hypertherm, in Hanover, the ESOP’s total assets top $500 million. Even when accounting for the debt, and including retirees, it comes out to nearly $300,000 per person.

And the employees, like all participants in ESOPs, won’t have to pay a penny for it.

Why would the owners want to give their companies away?

Actually, ESOPs aren’t a giveaway. They are a way for shareholders to sell their company, very slowly, to liquefy their shares without liquidating the company. There are certain tax advantages as well.

But there are also more lofty principles involved.

For one, the founders of these companies don’t want to see what they built chopped up and sold off piecemeal by some private equity firm looking for a quick profit. 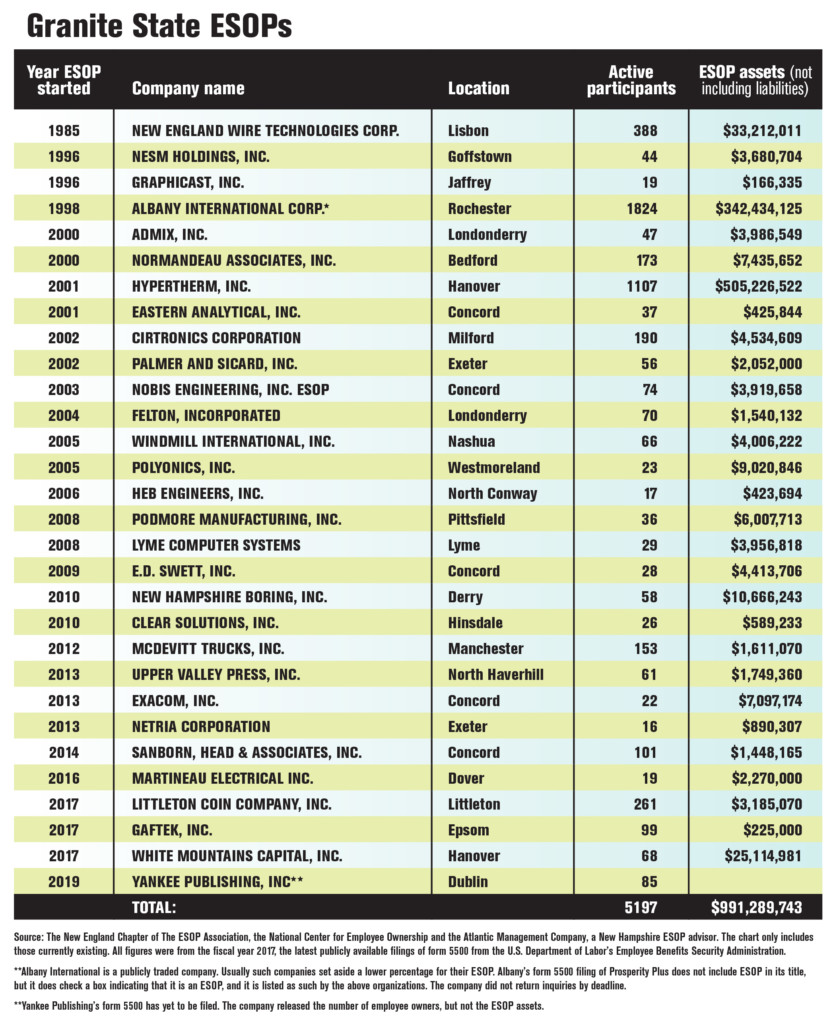 That was the take of Jamie Trowbridge, president, CEO and a third-generation owner of Yankee Publishing.

“The family members were all in favor of this,” said Trowbridge, who has been working on the plan to form an ESOP for the last 2½ years. “The alternative would probably have been to sell the assets off to different buyers, breaking up the company, and perhaps moving pieces elsewhere. That was unacceptable to us. We didn’t like the idea of good-paying jobs leaving New Hampshire.”

It was also the main concern of Dick and Barbara Couch, the founders of Hypertherm, five years ago, when they started to transition their company to an ESOP.

“Companies like Hypertherm are usually sold to a strategic buyer, financed through private equity. That just didn’t resonate for us,” Barbara said in a 2014 interview published in NH Business Review.

For Cirtronics Corp., a contract manufacturer in Milford, it was the “final piece of the puzzle” in building a culture of ownership, said chief financial officer George Mandragouras. He extended the Chinese proverb, “If you give a hungry man a fish, you feed him for a day, but if you teach him how to fish, you feed him for a lifetime,” adding that true economic security involves not just being able to fish but “owning the boat.”

That sense of ownership increases productivity and cooperation, reduces turnover and encourages workers to come up with solutions to make money and cut costs, say ESOP promoters.

“It’s not just working for a paycheck,” said Beaudette of Admix. “They all have a stake in the future of their company. If the company’s future is bright, their future is bright. We have been growing since the transition, and I got to feel the shared ownership was part of that growth.”

In fact, several studies show that ESOPs grow at a higher rate — 2% to 3% — than companies without them. And the growth rate is nearly 10% more when there’s also a participatory component.

ESOPs are not like worker-owned cooperatives, in which employees get to vote on their board members and make other decisions as well. Under ESOPs, employees legally only get a chance to vote if a change in ownership, through a merger or sale, is involved (unless the owner bequeaths more power).

In fact, ESOPs are run by a trustee appointed by the board. Sometimes, as in Yankee’s case, the trustee is a third party. At Hypertherm, Dick Couch was the first trustee.

“I admit it is somewhat circular — but I have a fiduciary responsibility to the ESOP,” he has said.

Owners also see ESOPs as a way of succession, a way to keep the company going when there is no obvious family member to take over, and that becomes more of a likelihood as generations go by. Often brothers and sisters would buy out each other’s shares, but in Yankee’s case, there were still 17 family members with an interest.

If Yankee had too many, Hypertherm had too few, and none of the Couches’ children wanted to take over.

“They [the Couches] didn’t have anyone in the family, so they were selling it to the employees, what they considered to be part of their family” is the way Jane Moss, senior treasury analyst of Hypertherm, who now administers the ESOP, put it.

Or as Beaudette put it, “At my age I needed an exit strategy. My kids, they had other things they were doing already.”

ESOPs allow owners to dispose of their shares, even though there isn’t an obvious buyer.

“You are kind of creating a market for your shares,” said Tabitha Croscut, an attorney at Devine Millimet in Manchester who specializes in ESOPs.

While selling any company is complicated and expensive, selling one though an ESOP is even more so.

There are U.S. Department of Labor ERISA regulations, since ESOPs are a retirement plan. There are tax implications and the financing usually involves some split between the bank and the owner. The bank provides the cash to the company, which then uses that cash to fund the ESOP, which then gives some of it to the sellers so they will get some payment upfront. The owners don’t need to come up with cash. Instead, they give up their shares to the ESOP in exchange for a note — the promise that the ESOP will pay them back. They only get paid for their shares in full when that note is paid off.

It is the company that pays off the bank loan and contributes to the ESOP out of its profits (though the law limits ESOP payments to 25% of payroll).

All of these loans can have different repayment terms, and could be renewed as the company transfers more shares into the ESOP.

For instance, in Yankee’s case, the bank loan term is over a dozen years, but Trowbridge told NH Business Review that he would like to pay that off in three or four years. And the company might transfer more shares into the ESOP before totally paying off the loans, to avoid closing costs, beginning another cycle before 100% ownership is achieved.

That’s the ultimate goal, though Trowbridge said the company will evaluate before deciding on each transfer.

ESOP shares are essentially worthless to the employees at first, because the loan is roughly worth the value of the shares. In addition, most employees won’t be fully vested for a period of time (in Yankee’s case, it takes six years). Those who are fully vested (who leave due to retirement at 65, disability or death) won’t have much to collect after the first year payout because the ESOP debt is still large.

But as that debt is paid off, the value of ESOP shares increases, and if the company grows (its value is determined by a third-party appraisal every year), that value accelerates. ESOP owners’ accounts get fatter when even more shares are transferred.

Yankee, like most companies, started out by selling 30% of itself to the ESOP, and for a good reason. That’s when a federal capital gains tax break kicks in. The owners can defer the capital gains tax (“basically forever,” said Croscut), if they roll their investment into domestic stocks.

Companies get an even nicer tax break if and when they transfer 100% of the ownership to the ESOP — the business doesn’t have to pay any federal income taxes. (It has to become an S corporation to take advantage of this, which may not always be in their best interest, however.) The employees have to pay taxes when they cash in their ESOP shares (the money is treated as ordinary income), though that too can be deferred, if it is rolled over to an IRA or 401(k).

In any case, they don’t have to pay it all at once, since they — like the company’s former owners — get paid annually over a set number of years.

“Once you become an ESOP, instead of one big transaction, you have lots of little transactions, and by using the tax deductions, it makes it more sustainable,” said Mandragouras, of Cirtronics.

For Admix, it took 14 years to get to 100% employee ownership. Hypertherm did it in 13 years, and when it set up that final transfer, it was done so it would stretch out over 50 years.

For one, you want to have shares to sell, you don’t want some employees to have some shares where others have none, waiting for someone to retire.

In some smaller companies, a partner who once looked to transition out decides to stick around and buys out the ESOP.

And an ESOP’s very success sometimes attracts the private equity that the company’s owners once tried to avoid. And when their offer is big enough, then the trustee — as fiduciary — must recommend selling the company. Employees could get “three or five times their salary as a result of the transition,” said Croscut. “It is ironic, but it’s really exciting for those employees, everyday workers, who are able to walk away with an immense amount of wealth.”