Survey: New construction shortage to continue until at least 2022

The rate of new single-family construction in the U.S. has yet to recover to historic norms following its collapse during the Great Recession – and real inroads are not expected to be made until 2022 or even later, according to a survey of economists and real estate experts released by Zillow. 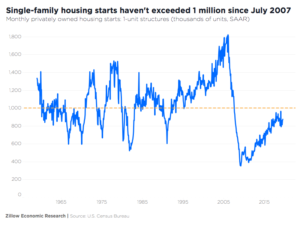 The survey, conducted for Zillow by Pulsenomics, found that a majority of respondents expect new single-family construction in the U.S. to remain below a 1 million-unit annual pace until 2022 or later. Historically, single-family housing starts have averaged more than 1 million units a month and reached heights of more than 1.8 million in 2006 before plummeting during the Great Recession. Activity has picked back up since then, but has yet to again reach the historic average.

In the survey, a slight majority of panelists said they expect the level of new single-family construction will remain below 1 million units until 2022 or later, with the most pessimistic projections pushing this off until 2029. One in five said they think that threshold will be reached by the end of next year, and a quarter are targeting 2021.

Asked about what actions would most effectively help increase the supply of single-family housing, the panelists expressed the strongest preference for relaxing local review regulations for projects of a certain size – 56% of respondents included this option among their three most-preferred. Reducing mandatory minimum lot sizes (favored by 38% of respondents) and easing the land subdivision process for landowners (38%) were the next most commonly chosen.