‘One of the fundamental precepts of a democracy is that public officials must be accountable to the citizens,’ says judge 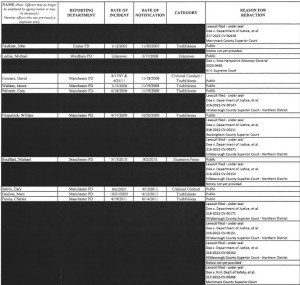 A screenshot of a portion of the Exculpatory Evidence Schedule, also known as the Laurie List, that was released earlier this month.

State courts are violating their own rules by sealing all Laurie List lawsuits, according to a judge’s ruling in one case involving an officer trying to get off the list.

Attorney General John Formella reported earlier this month that all of the lawsuits brought by police officers trying to get their names removed from the Laurie List, also called the Exculpatory Evidence Schedule, are sealed in the courts, except for minimal information that keeps their identities secret.

However, Hillsborough County Superior Court Judge Will Delker wrote this spring that the courts must make a redacted copy of the original complaints available to the public, according to a copy of the order recently obtained by InDepthNH.org.

“One of the fundamental precepts of a democracy is that public officials must be accountable to the citizens,” Delker wrote.

“This concept has been codified in the New Hampshire Constitution since 1784. Part I, Article 8 provides: ‘All power residing originally in, and being derived from, the people, all the magistrates and officers of government are their substitutes and agents, and always accountable to them. Government, therefore, should be open, accessible, accountable and responsive. N.H. Const. pt. I, art. 8. To accomplish this end, the Constitution states: ‘the public’s right of access to governmental proceedings and records shall not be unreasonably restricted.’ Nowhere in state government is this principle more firmly established than in the court system.”

Delker’s order ruled that redacted complaints in several Laurie List lawsuits must be made available to the public. All of the cases that Delker listed in the order, however, are listed as being sealed nearly completely in Formella’s report.

According to Delker’s order, cases cannot be fully sealed from the outset, and there must be compelling reasons for sealing the information at any level.

“Court records are presumptively open to the public ‘absent some overriding consideration or special circumstance,’” Delker wrote. “The party seeking to maintain court records under seal must demonstrate a ‘sufficiently compelling interest’ that outweighs the public’s right of access.”

Delker’s order states that the case files must include redacted versions of the complaints and unreacted versions. If the courts approve the reason to seal an individual case, the redacted version of the lawsuit must still be available to the public.

“New Hampshire Rule of Civil Procedure 13B(c)(4)(C) sets forth a process by which a party must file a pleading with confidential information redacted as part of the public file. At that same time, that rule requires the party to file an unredacted version of the pleading for the Court’s consideration. The unredacted pleading must be accompanied by a motion to seal setting forth the basis for claim of confidentiality or privilege,” Delker wrote.

The lawsuit in which Delker ruled is still pending an outcome.

The Laurie List is supposed to contain the names of officers with sustained discipline for dishonesty or excessive force in their confidential personnel files that could impact their truthfulness while testifying at trial.

The list is meant to alert prosecutors in cases that should be disclosed to criminal defendants who are constitutionally guaranteed all evidence that is favorable to them. That could include the names of police with credibility problems who are going to testify against them.

Although Formella started to make public a partial list this year after a new law went into effect requiring transparency, it is still not complete. The new law allows officers on the list to file a lawsuit in Superior Court arguing why their names should be removed.

The identities of more than 70 officers are not being released pending the outcomes of their individual lawsuits. The latest report says 183 names have been disclosed. About 30 names have been removed through a confidential process by the attorney general since 2018.

According to the latest compliance report from Formella, all of the lawsuits filed by officers seeking removal from the list in court are sealed and filed under the pseudonyms John Doe or Jane Doe.

“Court staff have advised us that the only information available to the public is the pseudonymous case name, the case number, and the court in which it is pending,” Formella wrote in the July quarterly report.

While pseudonymous lawsuits are sometimes allowed in New Hampshire courts, courts are not supposed to seal the whole file as is happening with the Laurie List lawsuits.

Formella’s spokesman Michael Garrity said any decision about sealing cases is made by the court system.

“It is our understanding that the court system has defaulted to sealing the dockets in these cases as a matter of course, but that some judges have limited the scope of the seal in particular cases on their own or upon request,” Garrity said.

“Regarding your concerns that sealing all of the Laurie List lawsuits except for the case pseudonymous name, case number, and court location is unlawful, the statute (RSA 105:13-d; HB 471 in 2021) requires information to be confidential at the outset of a case and prohibits disclosure of the identity of the officer until the case is over, unless the judge unseals the case file before then,” Warner said in an email.

The public does have a limited opportunity to get the redacted copies unsealed, Warner said.

“After filing a motion to intervene, a non-party can file a motion to ask the court to review and release any non-confidential information. The parties to the action would then be able to take legal positions on what, if any information, can be released without affecting confidentiality,” Warner said.

Andru Volinsky, the attorney who is representing the NH Center of Public Interest Journalism in its ongoing lawsuit to unseal the complete Laurie List, said this current regime of sealing the lawsuits is unconstitutional.

“This really flies in the face of a constitutional court system,” Volinsky said.

Because of the high degree of secrecy surrounding these cases, even if a judge required a proper reason for a case to be sealed, the public would never know.

“I have no idea whether any of the judges who looked at these cases applied an appropriate standard whether to make this anonymous or sealed or not. It creates a system of secrecy that does not build confidence in the court system,” Volinsky said.

There are many unanswered questions about the way the state courts are handling the cases, he said. It’s not known if the cases are being vigorously defended or defended at all.

Many small communities may not have the resources to spend defending the placement of a particular officer on the Laurie List, he said.

It is also unknown if the cases are being assigned to particular judges who have a subject matter expertise in these types of cases, or if the officers are losing their cases and appealing to the state Supreme Court.

In total, the public has no idea what is happening with the lawsuits, and that is a big problem, according to Volinsky.

“I think democracy suffers when you exclude the public,” said Volinsky.

The current law change is the result of a compromise between the attorney general and the American Civil Liberties Union-NH and five of the newspapers that sued in a public records lawsuit to have all the names on the list made public.

The state Supreme Court ruled last year that the list is a public document and remanded it back to Superior Court Judge Charles Temple, who originally ruled that it was a public document, to determine if the officers on the list have a privacy interest.

That case remains in court, although ACLU-NH, The Telegraph of Nashua, Newspapers of New England Inc., Seacoast Newspapers Inc., Keene Publishing Corp. and the Union Leader Corp. have withdrawn, saying they agree with the state that the new law makes the lawsuit unnecessary.

The lead plaintiff, the NH Center for Public Interest Journalism, which publishes InDepthNH.org, has argued for the case to go forward, saying the new law strikes the wrong balance between the public’s right to know about law enforcement officers and departments where serious misconduct allegations exist versus the privacy of individual officers.