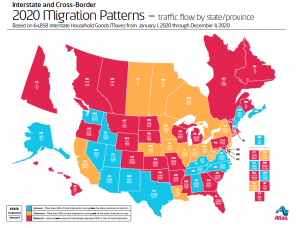 New Hampshire and Maine are among the leading states where people are moving during the pandemic, according to a recently released study of migration patterns.

The study, from moving company Atlas Van Lines, tracks the rate of people either moving into or out of a state. Maine an inbound rate of had the third highest percentage of inbound moves, 62.4%, and New Hampshire was right behind it at number four, with a 61.6% inbound move rate. In other words, over 60% of the moves recorded in each state were by households locating within its borders, as opposed to relocating elsewhere.

According to Atlas, which has conducted the migration study since 1993, the Covid-19 pandemic was a deciding factor in moving patterns in 2020 as millions of Americans relocated in 2020 because of the virus. They moved out of college dorms that abruptly closed, moved back to home states to work remotely and moved out of housing that no longer suited their lifestyle, among other reasons. In addition, companies relocated employees at much lower rates for work assignments in the U.S. and abroad, according to Atlas.

The state with the highest inbound percentage was Idaho, at 66.4%, followed by North Carolina, at 64.6%. Rounding out the top five was Alabama, with an inbound migration rate of 60.8%.