Some states use hotels to house homeless during pandemic, why isn’t New Hampshire? 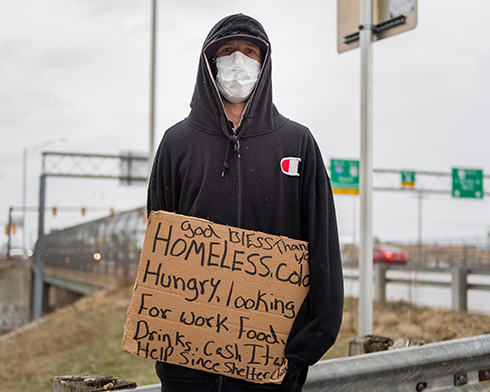 A homeless man with a mask asks for donations in Manchester. (Photo by Jessica Arnold/Arnold Imaging LLC)

Homeless advocates and officials have struggled in recent weeks to develop a solution for how to house and keep socially distanced the state’s homeless population.

Although the state recently opened a facility in Strafford County to house the homeless who test positive or exhibit symptoms, another possible solution may be found in opening up hotels whose business has been shuttered or slowed because of the coronavirus outbreak.

In Portland, Ore., for example, a hotel is being used to house homeless individuals while in Chicago, hotels and YMCAs are working with the city to house those who are ill but don’t require hospitalization. Programs like this have led to a national initiative, Hospitality for Hope, to connect the hard-hit hotel industry with the health community struggling to find housing and support as the Covid-19 public health crisis grows.

Martha Stone, executive director of Cross Roads House in Portsmouth, said she would support any effort to use unoccupied hotel rooms to help house homeless individuals and families.

Stone operates one of the largest emergency shelters in the state. It houses single men and women along with families and shelters an average of 110 to 120 people a day. Cross Roads has extremely limited space to quarantine anyone in her shelter.

“From day one, this has been my most significant concern,” she said

“On my own, I started calling hotels, but I was unable to find anyone who had rooms for us to use. I had funding to pay for it through city welfare,” Stone said.

New Hampshire Gov. Chris Sununu classified hotels and commercial lodging facilities as essential services, although many have closed or are working at reduced capacity. On Monday, he ordered all hotels and short-term rentals like Airbnb to suspend nonessential accommodations, effective immediately.

State officials have been helping shelters and others find emergency housing, but a statewide response plan is in the works for people who are homeless and have tested positive for Covid-19 or are experiencing symptoms, said Jake Leon, public information officer for the New Hampshire Department of Health and Human Services.

“We are working with local communities now to find places for those with symptoms or need to quarantine,” he said. “There have been a handful of those cases. The good news is so far there have not been too many.”

However, Leon said, officials, municipalities and care providers are in the process of identifying additional venues prepared to handle large numbers of people who might need to be isolated. Hotels could be among those facilities.

“We are exploring every single possibility,” Leon said. “It is a critically important need.”

He said it is a complicated process to get signed agreements in place. Officials want to ensure everyone’s health and safety while planning for a possible surge in the number of people who need housing while recognizing shelters across the state are at or near capacity already.

Mike Somers, president and CEO of the New Hampshire Restaurant and Lodging Association, said the association has facilitated some discussions with the state, but it is really up to individual hotels what they want to do.

“A lot of properties have closed up for the month, but certainly some are interested in getting involved,” Somers said.

Nick Pearson is the general manager of the Jupiter and Jupiter NEXT, two hotels located across the street from each other in Portland, Ore. Like many others across the country, he saw his occupancy rates plummet earlier this month when President Trump declared Covid-19 a national emergency.

“Suddenly we looked at the rest of March and April, and we were at less than 10% occupancy,” Pearson said. “We closed the Jupiter and moved everyone over to Jupiter NEXT.”

He laid off 80% of his staff and was looking at the prospect of closing completely when he heard there was a need to house the city’s homeless.

“I immediately called and asked what I could do,” he said.

Within 48 hours, Pearson had struck a deal with Multnomah County through the Joint Office of Homeless Services, which is a partnership with the city of Portland and the county.

“The county has leased the entire (Jupiter) facility from us, and that is enough for us to keep the doors open,” Pearson said. “I am down to 11 employees. The county contract allows us to cover the basic bills like the mortgage, but we’re still losing money.”

County employees manage the 81-room hotel, including who is housed there. Additionally, they take out the trash and change the linens during the time of the person’s stay, Person said. Jupiter employees can only enter the rooms to clean them after someone has checked out. The county provided Jupiter staff with personal protective equipment and appropriate cleaning supplies.

Chicago Mayor Lori E. Lightfoot has announced a new leasing agreement with local hotel operators to provide hotel rooms for those exposed to or mildly ill with Covid-19 who don’t require hospital care but cannot be at home.

In light of these programs, the American Hotel & Lodging Association has developed the Hospitality for Hope program for its members. As part of this initiative, AHLA is working to create a national database at the federal level with Health and Human Services, as well as at the local level with industry-partner state associations. Local, state and federal government officials will be able to search willing properties based on geographic location, according to an AHLA media release.

In Illinois, for example, more than 20,000 hotel rooms are under contact and available to the city and state, said Michael Jacobson, CEO and president of the Illinois Hotel & Lodging Association.

“If you want to look for a silver lining, it’s great to see such a positive response. Hotels have raised their hands and said we want to help,” Jacobson said. “By no means is a hotel making money off this. They are getting a break-even rate.”

‘Consequences for your health’

Cathy Kuhn of the New Hampshire Coalition to End Homelessness and who is chief strategy officer for Families in Transition-New Horizons in Manchester, said last week there are about 1,400 homeless people in the state. Each night, the New Horizons shelter at 199 Manchester St., the state’s largest shelter for individuals, provides beds for 138 people.

To practice “social distancing” — maintaining a six-foot distance from others — in a homeless shelter is difficult, if not impossible.

To make matters worse, the homeless, she explained, are among the most vulnerable population because many have “pretty significant medical challenges”, whether physical or mental.

“Being homeless has consequences for your health, and maintaining personal hygiene is really difficult,” she said.

Kuhn said she knows they are looking for facilities for isolation and quarantine cases and says that may involve using hotels if they can find them.

Kuhn said since Gov. Chris Sununu declared a state of emergency, the shelter has implemented changes under guidelines issued by the Centers for Disease Control. No one can enter the facility without first answering questions concerning contact with individuals testing positive for Covid-19, whether they have any respiratory problems, etc. Anyone with respiratory problems is given a face mask and referred to Catholic Medical Center’s Healthcare for the Homeless, which is housed in the same building.

Next door in Maine, hotel and commercial lodging facilities are included in the state’s list of essential services and can remain open. In Vermont, Gov. Phil Scott as part of his Stay Home, Stay Safe order has closed lodging facilities, including campgrounds and vacation rentals.

There are exceptions to that order that include: housing for vulnerable populations (emergency shelter for homeless individuals) as arranged through the state; providing accommodations for healthcare workers, or other workers deemed necessary to support public health, public safety or critical infrastructure; and use of lodging properties as quarantine facilities as arranged by the state, according to the governor’s office.