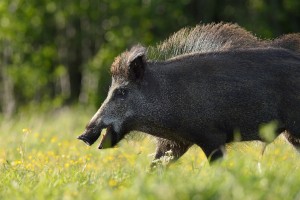 Eurasian boar are among the non-native species at Corbin Park near Croydon. (Eric Mandre photo)

The New Hampshire House of Representatives is set to vote on a bill that could increase property taxes for private hunting preserves in the Granite State. The bill has not received a lot of attention, but it ties together the diverse challenges of invasive species, property tax rates, open space preservation, funding for the Fish and Game Department, and even the Laurie List of cops with credibility issues.

House Bill 467 would exclude some hunting preserves from “current use.”

New Hampshire’s current use program allows undeveloped land over 10 acres to be taxed at a lower property tax rate. There can be no houses, septic tanks or other construction on the 10 acres, but timberland and farmland may qualify. Landowners get an extra discount if they allow public recreation on their land.

Some detractors argue the current use program creates an unfair property tax burden for low-income homeowners with small lots. Supporters of current use argue it protects the rural character of New Hampshire because it creates an incentive to preserve wild, open space in the Granite State.

Over half of New Hampshire’s land is in current use.

HB 467 would specifically exclude property from current use if the land is “used to harbor non-native, non-domesticated animal species.” According to the bill sponsors, this change is targeted at Corbin Park, a massive and secretive private hunting preserve in Croydon, in western New Hampshire.

Officially called the Blue Mountain Forest Association, Corbin Park, depending on which report you read, is anywhere from 19,000 to 26,000 acres — one of the largest in the United States. Banking millionaire Austin Corbin created the park in the late 1800s and stocked the preserve with exotic species, from Himalayan mountain goats to bison.

Corbin Park has a long and storied history, including alleged visits from Rudyard Kipling, Teddy Roosevelt and Joe DiMaggio. The membership is very exclusive, somewhere from 20 to 30 total, with an annual membership fee of five or six figures. Once again, the exact details are private.

In the past two decades, Corbin Park has captured the attention of state legislators concerned about invasive species. Eurasian boar, in particular, are known to escape the park grounds. The wild pigs can do significant damage to habitats and crops, and they out-compete native species for food. Wild boar are also speedy and abundant breeders, which makes it harder to control their population.

The owners of Corbin Park allow locals to hunt and kill any wild pigs found outside the preserve.

Supporters of HB 467 believe the state’s current use law is not intended to protect private landowners raising exotic animals for sport. They argue Corbin Park is damaging the environment by introducing invasive species, so they should not get a property tax break.

The guests at Corbin Park also do not have to buy a hunting license to shoot the wild pigs and elk owned by the park. That means they do not contribute directly to the Fish and Game Department, which still has some responsibility to oversee the land and manage New Hampshire’s wildlife.

Supporters of HB 467 conclude that these wealthy hunters are not paying their fair share in taxes.

Opponents of HB 467 defend Corbin Park and criticize any changes to the current use program.

Corbin Park may have some problems securing its wild boar, but it still preserves a huge area for native New Hampshire wildlife. Corbin Park can also generate tourist income for the area when visitors spend money at nearby hotels and restaurants.

Changing the current use law to target Corbin Park could also have negative impacts on other businesses and outdoor recreation. For example, New Hampshire is home to several private hunting preserves that raise pheasants or other non-native game birds. These preserves might be forced to sell their open land to private developers if they cannot keep their land in current use.

Lastly, any additional property tax dollars raised through HB 467 would not go to the Fish and Game Department for wildlife management. Property taxes primarily go to towns and the state for school funding.

There are several notable moments in Corbin Park’s history, including an incident in 2004 when Steven Laro shot and killed Robert Proulx during a hunting trip on the property. This is one example lawmakers point to when arguing Corbin Park creates costs for the state – there can be emergency calls from the preserve.

Laro was ultimately found not guilty of negligent homicide, but the Fish and Game Department moved to revoke Laro’s hunting license.

This was not the first time Laro made headlines. In the 1990s he was the main witness in the murder case against Carl Laurie. Laurie appealed his murder conviction to the New Hampshire Supreme Court because the prosecution failed to disclose Laro’s employment records as a detective sergeant with Franklin police. According to news reports, these records included “reports of Laro being volatile, neglecting his duty, and threatening civilians.”

The state Supreme Court sided with Laurie, and the state created the so-called “Laurie List” of cops with credibility issues that could impact criminal convictions. Over the years, that list has evolved into the “Exculpatory Evidence Schedule.” There is an ongoing lawsuit and debate over what information on that list should be public.

The House Municipal and County Government committee voted 17-2 to recommend the full House kill HB 467. Without changing the wording, most legislators on the committee were concerned the bill would have broad unintentional effects on other hunting preserves or maybe even some farms.

The full House is next scheduled to meet April 7, 8 and 9.