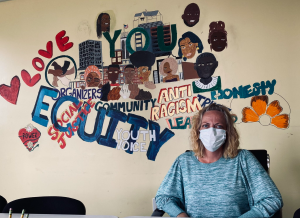 Jessica Margeson is a tenants’ rights advocate who each Wednesday afternoon heads a clinic meeting in Manchester with tenants having problems paying the rent a for are being evicted. (Photo by Pat Grossmith)

A year after the Granite State Organizing Project began its weekly tenant clinic, about 250 families have been helped through the eviction process and in obtaining NH Emergency Rental Assistance Program funds to stay in their apartments.

Jessica Margeson, the tenant housing advocate, heads up the clinic answering tenants’ questions and helping them prepare for their hearing in Circuit Court, a daunting experience for people facing an eviction while trying to find that elusive affordable apartment.

Margeson said the majority of people who came to the clinic in the past year sought help after receiving a renovations eviction. A close second were those seeking emergency rental assistance funds, many of whom could not cover rental increases that have exploded in the past two years whom without government help.

The remaining tenants were being evicted for non-payment of rent.

When Covid-19 began and businesses shut down, the CDC enacted an eviction moratorium on Sept. 4, 2020, which Congress extended through July 2021. When it ended, evictions began again.

To help people remain in their homes, the federal government initiated the Emergency Assistance Rental Program (ERAP), covering rents for 18 months. A second program was implemented when that expired, but Margeson said that funding is coming to an end.

The timing will coincide with winter.

“I’m expecting a new wave of evictions,” she said. And already, with temperatures just starting to cool, shelter beds are nearly full every night.

Once the eviction moratorium ended, landlords began ousting tenants, citing the need to renovate apartments. Tenants have no recourse under New Hampshire law.

“There were so many renovation evictions I sometimes was going to court with people two to three times a week,” said Margeson. “It’s scary sometimes, especially if it’s your first time.”

She helps tenants prepare for court and explains what is going to happen. Just knowing that they will be able to give their side of the story helps tenants a lot, she said.

“The number one thing people get yelled at in court for is talking when it’s not their turn,” she said. “Knowing things like that is helpful, because once you get yelled at it kind of throws you off.”

Margeson has been helping tenants for years, but it wasn’t until she joined the Granite State Organizing Project that she was paid.

Fourteen years ago, she was a single mother with two pre-school-age kids living in a rundown apartment on Lake Avenue in Manchester. She was paying $625 a month – her income was $635 – for a two-bedroom.

“It was really ridiculous that every bit of my money went for rent,” she said. “My problem was I had no heater or stove.” Her apartment was fitted with an old gas stove that doubled as a heater.

“It was constantly being shut off because of gas leaks,” she said. Margeson took a trip to the city’s building department to take a look at what housing code violations were associated with her building.

It was a fairly thick file. The landlord was cited for more than 60 violations.

“Nothing was being done about it,” she said. “They (housing code inspectors) constantly came out. I had to file a 540 petition.”

A 540-A petition is a source for tenants to enforce their rights. “Let’s say somebody gets illegally locked out of their apartment – the landlord changes the locks instead of going through the actual eviction. That’s illegal. A tenant would go to court, file petition 540 asking for relief (in Circuit Court). The judge will see it that day, usually within four hours, and have a hearing,” she explained.

For something like an illegal lockout or heat being shut off in winter, the judge will issue an order that day telling the landlord what needs to be corrected immediately.

If the landlord doesn’t comply, the tenant can seek damages, usually $1,000. “The more egregious it is, it can be up to triple damages,” she said.

Margeson said she has seen cases where the landlord wasn’t budging over something that would cost a few hundred dollars and it “ends up costing him thousands later because of what he did.”

She said her problem with the Lake Avenue building lasted so long that she burned through toaster ovens and learned how to make a “mean mash potato in a coffee pot.”

While her situation was tough, her experience makes her an effective advocate for people in similar circumstances.

Margeson said in the past year she has seen horrible things happen to tenants. One woman, she said, lived in an apartment infested with bedbugs. She withheld rent for the month of October 2021 after asking the landlord to correct the situation.

Margeson met with the landlord and, she said, the next day he filed documents in court to evict the woman and her young family.

What he used, Margeson said, was an old demand for rent. The tenant had been late on her $1,300-a-month rent in August but paid it in full a few days later. The landlord, Margeson said, did not tell Crocker about the $15 fee that is due the landlord in an eviction case.

“We went to court, and it was all downhill. It was horrible,” Margeson said. “She got evicted over that $15.”

It was a valuable lesson for Margeson. who tells every tenant to be sure and pay that $15. And if the landlord refuses to take it, document that so it can be presented in court.

“You have to settle that because there is no time limit on the $15 fee,” she said. “It’s just a sitting time bomb and tenants need to know that.”

Fortunately for the woman, she received her Housing Choice Voucher (Section 8), and the last day she was to be out of the apartment, she found a place.

‘Not leaving them behind’

At the clinic, Margeson also helps people look at everything they can do to increase their household income. That includes looking to see if they are eligible for food stamps, the child tax credit (a grandparent raising their grandchild, for instance) or NH Emergency Rental Assistance Program (NHREAP) or see if they could make a job change to increase their income.

She also suggests they look at their credit rating and try to pay off small debts to increase their credit score, which landlords check before leasing an apartment to a new tenant.

Margeson said it is also worth it to try to negotiate with the landlord. For instance, a tenant could tell the landlord they will be out of an apartment by a certain date in return for the landlord withdrawing the eviction papers so that is no longer on their record.

Margeson said in the past year she has met a lot of great people who have come to the clinic.

“I’m sorry they’re going through all that,” said Margeson who is looking for a full-time job, one that will accommodate the clinic. “I’m not leaving them behind.”

The tenants’ clinic takes place on Wednesdays, from 1 to 4 p.m., at the Granite State Organizing Project office at 1045 Elm St., Suite 201.