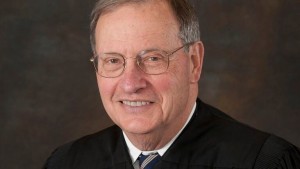 Judge DiClerico, who served on the U.S. District Court in New Hampshire for 30 years, began his judicial career in 1977 as an associate justice on the New Hampshire Superior Court. In 1991, he was appointed chief justice of that court.

In 1992, he was named to the federal bench, as a judge in the New Hampshire district. During his first five years on that court he was the chief judge. In 2007, rather than retire outright, he became a Senior Judge, carrying a reduced caseload, and continued in that capacity until his death.

Raised in Nahant, Mass., he earned degrees from Williams College and Yale Law School. He began practicing law in 1968 as an associate at the Concord law  firm of Cleveland, Waters and Bass. In the fall of 1970, he became an assistant attorney general in New Hampshire, serving first under Attorney General Warren Rudman and then Attorney General David Souter.

He is survived by his wife Laurie, their daughter Devon Germak and her husband, Dr. Matthew Germak, their twin daughters, Sofia and Katelyn, and a brother, Dr. Robert DiClerico.