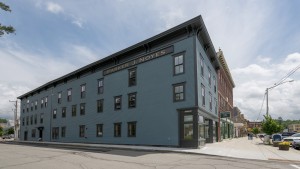 Four years after it was purchased with the goal of making it the linchpin of downtown Lancaster’s redevelopment, the historic Parker J. Noyes has been transformed into apartments and retail space.

The Northern Forest Center, which spearheaded redevelopment of the Main Street building, said tenants would begin to move into the apartments this month.

The first-floor retail space will be occupied by Taproot Farm & Environmental Education Center, which will move its local food marketplace once the space is fully outfitted, new equipment is installed, and licensing is completed. That move-in is expected to take place in late August or September, said Melissa Grella, executive director of Taproot.

The $3.5 million-project, was funded through a combination of investments, state and federal tax credits, public and foundation grants and charitable gifts. Federal sources are contributing up to $330,000 toward the project, the remainder – $3.2 million – comes from non-federal sources.

The Northern Forest Center said the building’s award-winning renovation has transformed the corner of Main and Bunker Hill Streets and inspired others to make investments in Main Street, ranging from fresh paint and window boxes to the purchase and renovation of other buildings.

“Even before the national housing crisis hit, we knew that Lancaster businesses were having trouble finding quality housing for new hires,” said the center’s program director, Julie Renaud Evans. “The Parker J. Noyes building offered the opportunity to create housing, and even more a chance to invest in Main Street by rehabilitating a historically, aesthetically, and economically significant building.”

The center purchased the building in 2018 and hired Garland Mill to manage the complete renovation, which called on the expertise of 35 subcontractors, most of them local, and more than 80 trades workers. After 24 months construction, which included a partial new foundation, re- 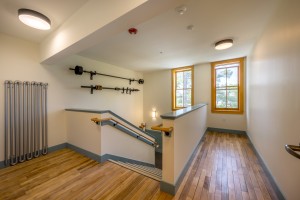 engineering to repair old fire damage, extensive historic preservation and energy-efficiency work, the six new apartments, including one apartment that complies with requirements of the Americans with Disabilities Act, are ready to welcome new residents.

Earlier this year, the NH Preservation Alliance recognized the project as an outstanding example of successful historic preservation and community development investment in its 2022 awards. The building is now listed on the New Hampshire State Register of Historic Places.

“It has been so satisfying for the Garland Mill to be a part of restoring this beautiful old building on Lancaster’s historic Main Street,” said Ben Southworth, president of Lancaster’s Garland Mill. “We’re excited to share this gem with our community for years to come.”