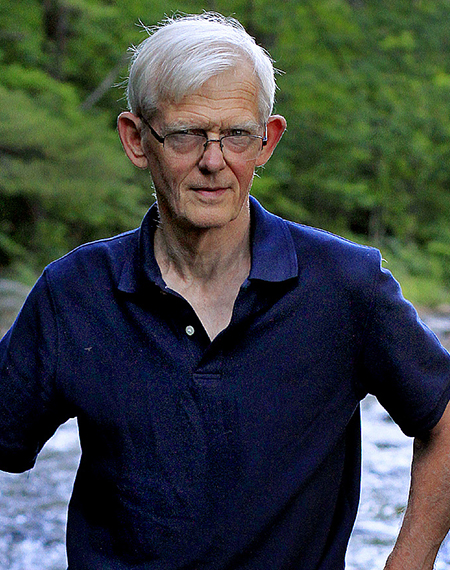 There is more to Jim Rousmaniere’s new book, “Water Connections,” than the title may suggest. While it chronicles the history and future of fresh water, particularly in New England, the book is more of a collection of stories on how human interaction has become a changing and formidable force of nature.

After graduating from Harvard, the Roxbury resident designed irrigation canals in India with the Peace Corps. But for the longtime journalist — he was a reporter for The Baltimore Sun and is a former longtime editor and president of The Keene Sentinel — it was something much closer to home that inspired his six-year exploration of the topic.

Q. The subject matter of your book is both broad and so uniquely specific that something must have inspired you.

Q. Aside from drinking and using it, how does one have a relationship with water?

A. In the last 10 years, more and more people have taken an active role in protecting our water supply. When you look at the watershed coalitions and river councils across the country and New England, it’s a sign that people are getting involved at the citizen level. They are not running for PTA or local office the way they used to; instead they are joining up in these water-related nonprofits. So there is something that’s causing them to do that.

Q. Obviously one reason is to protect our local drinking water supply from contamination, but isn’t that more of a safety measure that falls on the government to oversee?

A. One of the big concerns in New Hampshire, Vermont and other states is stopping the use of PFOAs, a category of chemicals used in manufacturing that is contaminating water. The odd thing about this particular pollutant is that it doesn’t get in the water the standard way, like a leak from a tank — rather, it is an air emission. It floats through the air and lands on the ground, and when the rain comes, it seeps into the ground into aquifers and water wells.

Q. So what is the solution?

A. The short-term solution is bottled water, which really isn’t a solution. There have, however, been some interesting new steps taken under the state Department of Environmental Services to help send water from other towns’ public water systems into some of the infected towns. But because the PFOA contamination comes from well water, the long-term solution is to get another source of water to affected communities.

Q. How do you accomplish that with an airborne contaminant that can go undetectable for years?

A. The new way of thinking in the water protection arena is changing the infrastructure used to keep water clean. “Gray infrastructure” lies in protecting the actual hardware responsible for delivering the water from one place to another, like underground pipes or water treatment facilities. But the new thinking is protecting the supply through what is known as “green infrastructure,” which is buying land around water supplies to protect pollution from those lands getting into the water. That is already happening in a number of communities around New Hampshire.

Q. What role, if any, does climate change play in fresh water preservation?

A. It is a fact that over the years we’ve seen an increase in volume of drenching downpours, particularly in the Northeast, and that is a direct result of climate change. The stronger the rainfall, the more destructive they can be to the land meant to safeguard our waters. So preventative measures are necessary. In fact, the dams protecting those two reservoirs in Roxbury that were the origin of this book are currently being upgraded at significant cost, in large part to protect them from being washed away by a super heavy storm.

Q. While your book is a study of understanding our water resources, it’s neither the central theme of it nor the intended takeaway for readers.

A. The book is more about people than it is water. It’s about how human interaction is one of the keys to protecting our water, with its vulnerability and power providing the context. I want the reader to recognize they can play a hand in solving our water problems today, whether it be contamination or flooding.

But in doing so, they must also realize that some of the solutions are not as simple as they seem. Sometimes the best solutions in the environmental arena are to let nature do some of the work and not just think that if we engineer a dam or a dike that we can solve all our problems.