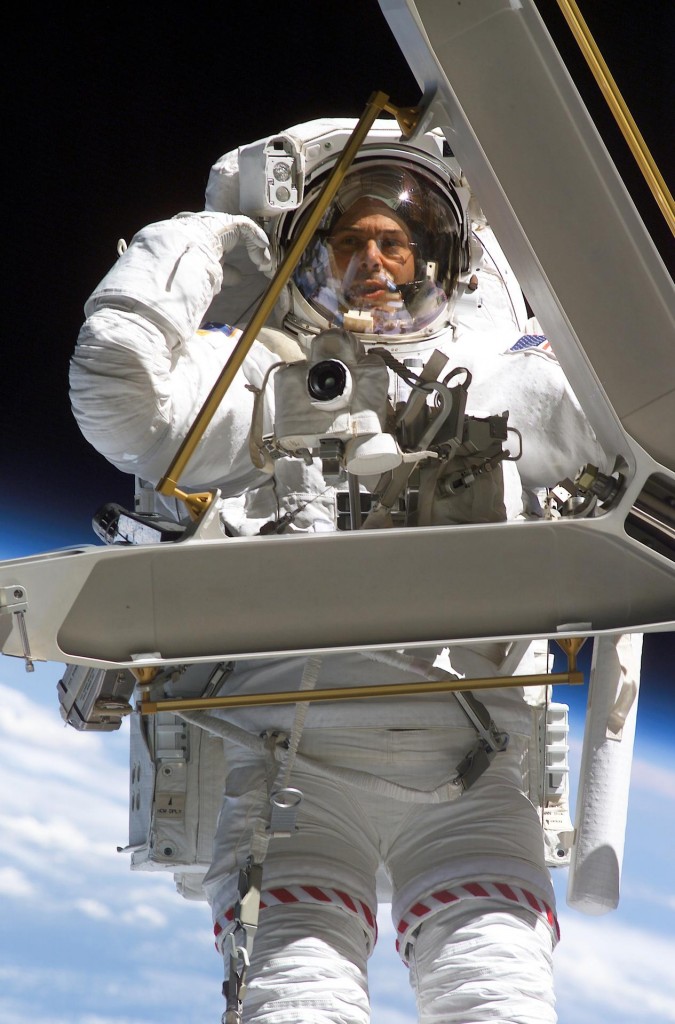 Lee Morin, a University of New Hampshire graduate and Manchester native, was aboard the International Space Station in 2002. He currently works at the Johnson Space Center, developing the cockpit of NASA’s newest spacecraft, which will travel to the moon by 2024.

A Manchester native and University of New Hampshire graduate, Lee Morin has led a diversified career as a naval flight surgeon who volunteered to re-enter active duty during Operation Desert Storm, as a medical practitioner at a private practice and as a NASA astronaut.

In 2002, the retired U.S. Navy captain was launched to the International Space Station and performed two spacewalks totaling 14 hours.

He currently works at the Johnson Space Center in Houston where he is the supervisor of the Crew Interface Rapid Prototyping Lab, working on the cockpit of NASA’s newest spacecraft, the Orion Multipurpose Crew Vehicle, which is scheduled to take the next men and the first woman to the moon by 2024 as part of the Artemis program.

Q. You’ve had a career path that includes degrees in medicine, microbiology and engineering, and then joining NASA. What was your plan?

A. When I was at UNH, I started off in engineering and I ended up deciding to apply to medical school because I thought there would be lots of problems to apply to medicine. That was really the path. I did surgical training and I’m board-certified as an occupational medicine specialist, but I always found engineering applications in medicine interesting, and there are a lot of opportunities in that area for various technologies applied to medical problems.

Q. How does one become an astronaut?

A. The astronaut is a special recruitment program. Every two to five years, an announcement comes out from NASA. In my case, the Navy had a selection board you applied to, and the Navy would decide who they wanted to forward to NASA.

Once all of those applications are received, it’s a formal HR process. There is a screening board, and many astronauts serve on that board to take the qualified and identify the highly qualified and then the most highly qualified that are brought forth for interviews. One hundred and twenty people or so are typically done 20 at a time, and those people are brought forward for medical testing, physiological testing, interviews and tours so the interviewees understand the nature of the job.

And some months after those interviews, NASA will announce – and that’s usually a national media event, and the individuals who are selected are individually called. That’s a very fun phone call to take: ‘Would you like to be an astronaut?’ And that’s usually a really easy question to answer, too.

Q. What happens once you are accepted to the astronaut program?

A. Folks are relocated here to the Johnson Space Center where NASA is located and you go into the training and that’s everything from media training to physics of space flight to learning about the organization.

The astronauts are taken on tours of the various NASA facilities including 10 centers and other field locations so you get a good appreciation of NASA. You also go immediately into scuba training for the space walks and start flight training a T-38, which is the a twin-seat plane NASA uses to learn to fly, also used by the Air Force. It allows them to maintain their flying skills as well as work as a team. And of course, there’s a lot of classroom training on the controls, and there is also Russian language training that is particularly important for the International Space Station.

Q. That’s interesting that you do in fact learn Russian.

A. The language skills are very important for the Space Station crew. They learn Russian as well as a military translator would and they have to take the same test as a military translator, and the astronauts are authorized language pay because its part of their job and they’re paid for that with a small bonus. It would be equivalent to completing a master’s degree in Russian – that’s the level of language skill.

Q. Tell me what it was like being launched into space.

A. You go up in this elevator that goes up to 195 feet, and then the people up there help you get strapped in and position you and make sure you’re all ready to go. You’re all strapped in, you’re sitting on your back and looking at the controls you’re responsible for, and you’re thinking about your training. And then those people go away, and now you’re sitting on 5 million pounds of explosives and you’re ready to take off, and you think, “What did I get myself into?” but it’s too late for second-guessing.

They light the engines for six seconds before they commit to a launch. The whole space shuttle shifts a foot and a half, and then you hear that distance rumbling of the main engines and then they light the big rockets along the side — you feel like you just got rear-ended by a semi and you feel that vibration and you feel that pull of the acceleration on your face. It’s like the fingers pulling the skin of your face down, and it gets hard to breathe because of the force pulling you down. It feels like the bully at the playground sitting on your chest.

And then there’s a bang and the solids come off, and then the space shuttle is a smooth ride from that point.

This whole process takes about eight minutes, and then it stops and things are very still, and you open the seatbelt straps and the straps kind of float away. Jerry Ross, my partner — this was his seventh launch and that was a record — said, “Welcome to space rookie,” and floated off to work on the controls. Once you relax, you can move with very little motion, just a few fingertips on the wall and you can float off in any direction. You don’t need to climb up the ladder, just two fingertips and you float up the ladder. It takes a while to get used to that, but once you’re in space for a week, the concept of walking seems unnatural.

Q. How does NASA work with small businesses?

A. NASA creates an environment that cultivates and nurtures innovation – everything from the intern programs we have here to facilitating many of the small businesses to participate in various incubator programs. I was at two companies in Chicago. They were building switches for the Orion spacecraft. There were technical nuisances on those switches, and being able to talk to the engineers and machinists actually making it – the company management, the management from the contractors managing the program – I was able to tell them, “This is how the astronaut will use this switch and that is why this switch is more important than that switch.” That teamwork of being able to provide the insight of how this will be used and why this is important helped us reach solutions to those problems. That’s an example of how NASA works with companies and their subcontractors on solutions.

Q. Why are we returning to the moon?

A. A sustained presence on the moon is really one of our key goals going forward, to develop the technology to go to Mars over the next decade plus. The other key thing with the moon is being able to use the resources there. We know what’s on the moon based on the Apollo landing as well as radar scanning. We know about the water on the moon. We also know about the minerals that make up the moon. The key step will be taking those things and using them for rocket fuel and habitats, and basically nurture and build up an industrial base so we don’t have to bring up things from Earth. They call that insight resources utilization, and that’s really going to be the key to enable long-term presence of humanity.

Q. Why is the moon necessary to go to Mars?

A. The moon is four days away, so that is the place to get started and develop the technologies. When you go to Mars, it’s going to be a commitment of months, and you want to make sure all of your life support systems and vehicle systems are really proven in the space environment, and that’s why you have to take advantage of the fact the moon is so close and use that as the stepping stone for that next historical milestone of landing on Mars.