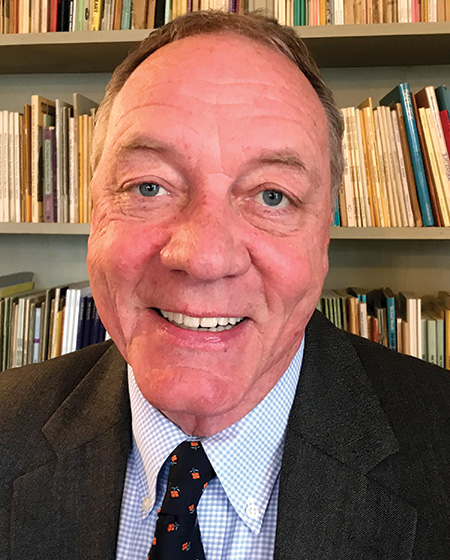 ‘The arts make you smarter, make you think more open-mindedly,’ says Bob Shea, who has for the past 33 years been director of the Barnstormers theater in Tamworth and is former executive director of the Palace Theatre in Manchester and the Dana Center at Saint Anselm College.

He would later meet, play and direct a wide range of colorful characters in a great many dramas and comedies during a theatrical career still going strong in its fifth decade.

A 1974 graduate of the University of New Hampshire, with a master of fine arts from the University of Memphis, Shea is well-known in the Granite State as the former executive and artistic director of the Palace Theatre in downtown Manchester and director until last spring of the Dana Center at Saint Anselm College. For the past 33 years, he has been director of the Barnstormers Theatre in Tamworth and with the New Art Theatre, which he founded in Manchester in the late 1990s.

Q. When did you get the acting bug?

A. I never gave it much of a thought until I went to college. I grew up in a very working class family in Manchester. I never saw a play or concert until then. It wasn’t part of life in Manchester in 1950s or ‘60s. People said, “Why in heck are you going to college? You could get a job with the telephone company.”

In my sophomore year, my friends in the fraternity I was in dared me to try out for a play because I was kind of a class clown. Dr. Joseph Batchelder was chairman of the drama department, and he became kind of a mentor to me. He just kind of cultivated that in me, saying, “You probably don’t know it, but it’s the only thing you can do.” It wasn’t exactly a compliment, but …

Q. What was the play?

A. I played the part of Harry in “The Time of Your Life” by William Saroyan. It’s the kind of role where you dig deep into your own humanity. I think that’s the most artistically satisfying thing, when you experience that kind of catharsis. That kind of role makes you a better person, and that’s the only reason to engage in artistic enterprises, really. It’s not about money or fame, it’s personal satisfaction.

Q. So what followed from that?

A. I was very lucky. My senior thesis was a directing project. It was “At the Hawk’s Well” by William Butler Yeats. It’s a poetic dance play, very avant-garde. I had a wonderful cast and production crew and a remarkably beautiful play. (Tamworth resident and actor) Cope Murray was looking for a young professional person serving as director and tour manager for a company of young American student actors performing American plays in Britain. I did that for five years. I would take the company out on the road for a four-month tour of the British Isles. We did mostly one-night stands, on the road, all the time. We were everywhere, usually performing in smaller communities for intimate audiences of 100 to 500 people, doing drama, comedy, experimental work.

Q. Were you primarily acting or directing?

A. I was mostly directing. I always thought directing was more artistically challenging, with a broader realm of artistic possibilities — all of the subtexts, the interpretations, the design. I always find that to be very challenging and rewarding.

Q. What sort of roles did you play when you did act?

A. I had a unique kind of movement that was good for parts like the Scarecrow in “The Wizard of Oz.” My side job was working at mime. I had a kind of double-jointed ability. My major skill was movement instead of voices.

Q. After five years in England, then what?

A. I went to the University of Memphis to get my master of fine arts. With an undergraduate degree, you don’t have as many options as you do with an MFA. I basically taught classes and worked as a professional program director. That paid for my tuition and it was a great opportunity for someone like myself to get an MFA and move on.

A. After Memphis, I moved to New York, spent a couple years there, working, auditioning. I was in schools in Brooklyn, offering poetry and literature for student groups. I loved living in New York, but I felt kind of trapped there. I couldn’t get out of the city. I had led an Outward Bound kind of program for years in New Hampshire, and I yearned to get to back to New Hampshire.

Q. When did you begin at the Palace?

A. I was at the Palace from 1983 to 1995. From ’95 to 2000, I was at the New Hampshire Institute of Arts. That was when it was transitioning from a community college to a four-year arts college. My job was to develop a curriculum and faculty support service for the student population. I actually founded a small professional theater company, the New Art Theater. I still produce plays there.

Q. You were executive as well as artistic director at the Palace. How did you like running the business end of things?

A. I enjoyed the business side very much. I really developed business and promotional skills.

Q. And how did business and theater interact in those years?

A. In 1983, downtown Manchester was a very different place. There was really nothing going on except for banks and a few law firms — very little in the way of new business. So the Palace was basically the spark for all the development on Hanover Street and Elm Street — the Opera Block, the Center of New Hampshire, a lot of development went in. It was kind of like a spark and over time the combustion of commerce took hold and everything turned around.

Q. How did your work at the Dana Center compare to the Palace experience?

A. The Dana Center had had a lot of different directors. I really wanted to do a different kind of basic philosophy of programming that was multidisciplinary — classical, dance, international music, jazz, basically all the artistic forms of music. I wanted the Dana Center to be a kind of cultural awakening.

Q. Does the general public in New Hampshire want serious drama or only feel-good musical comedies?

A. I think all audiences like a feel-good musical comedy. It’s more popular not only in New Hampshire, but every place. I think certain producing companies need to take artistic leadership in order to bring more insightful, artistic plays to audiences. When they see it done well, they love it.