Preparing for new opportunities in construction 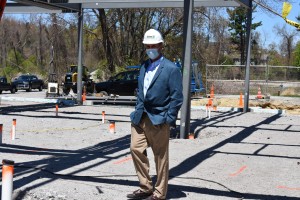 Tom Sullivan, manager of Bedford-based Sullivan Construction LLC, has become accustomed to wearing a mask on the job site and in the office since the pandemic hit.

Sullivan Construction has been through a lot since it was founded in 1970. But Tom Sullivan, manager of the Bedford-based company, couldn’t imagine that he’d be celebrating the company’s 50th anniversary in the midst of a global pandemic.

Sullivan Construction handles commercial construction jobs, both renovations and new construction projects. When the pandemic hit, some clients were initially hesitant to continue with projects as planned. One renovation project at a senior living facility was put on hold indefinitely as visitors were vastly restricted.

“They were very quick to close out any outside vendors coming into properties,” Sullivan said.

Yet most clients continued with projects as planned, and Sullivan Construction has been doing a bustling business during the pandemic.

“Once the governor declared that construction was essential, then people were very willing to move forward,” Sullivan said.

Still, job sites look different than they did before March. Sullivan Construction requires its 20 employees to wear masks, both in the office and on site. The company conducts daily temperature checks and screens workers for symptoms, although they haven’t yet had to send any workers home. The screenings apply not only to employees, but also to the various tradesmen that Sullivan Construction works with. Making expectations clear can be tricky.

“The challenge with that is we’ve got some subcontractors who are better versed in trying to do all the right things and comply, while others could be better,” Sullivan said. “We’re working to educate the workforce and make them understand we’re doing this to protect them as well.”

All of the extra precautions have led to what Sullivan refers to as “pandemic-type issues” — namely increased costs and slower pace on jobs because of social distancing. Although that has caused Sullivan Construction to raise prices on many jobs, Sullivan said that most clients have been willing to bear increased costs.

“This is the new normal until we get a vaccine,” Sullivan said. “Clients are very understanding because they’re dealing with all the same thing.”

For the most part, Sullivan’s supply chain has been interrupted, but one essential material — pressure-treated lumber — has been in short supply. That’s partially due to issues in international shipping, as well as increased demand, since more people are completing projects around the house.

“That’s the biggest thing we’ve seen so far. Everybody is building and doing home projects, so that’s eating up the supply,” Sullivan said. “The price of lumber has gone up, and that cost of that is something we watch closely.”

The 2008 financial crisis opened up new markets for the company — for example, the company did more manufacturing-related jobs after that recession.

“We had to adapt and get involved in different types of things,” Sullivan said.

This time, he expects to see more jobs that involve converting former office spaces into condos and other non-office uses.

“There’s going to be some new opportunities,” he said.

“We’re trying our best to implement policies and lead in a way that hopefully keeps people safe,” he said. “At the end of the day, the most important thing to me is that no one gets sick on our projects.”

This story is part of the “50 Businesses, 50 Solutions” series, shared by partners in The Granite State News Collaborative. For more information visit collaborativenh.org.