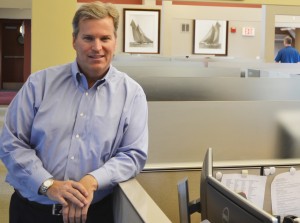 Paul McKeon, founder and CEO of B2W in Portsmouth, which has been acquired for an undisclosed amount to Trimble, a California-based technology company that also serves the construction industry. (Paul Briand)

B2W Software, a Portsmouth company founded in 1993 to create software to manage heavy civil construction projects has been sold to a California technology company with similar specialties.

Trimble, based in Sunnyvale, Calif., on Sept. 14 announced it has purchased privately held the firm, which got its start on founder Paul McKeon’s a card table in the living room of his Stratham home more than 28 years ago.

Financial terms of the sale were not disclosed. Operations as well as McKeon and the management team on Bow Street in Portsmouth are not expected to change with the sale.

In its announcement, Trimble said the passage of the Infrastructure Investment and Jobs Act and other infrastructure initiatives across the globe has motivated construction organizations to fast track the digitization of their processes and operations.

“Practically speaking, the acquisition means business as usual for B2W customers and employees,” McKeon said. “Trimble is looking to retain the entire team including the executive team. Trimble has been very enthusiastic about what they have seen from the team and the overall company.”

He added that with Trimble’s acquisition, “we can realize the next chapter of our story. By linking the planned with the executed, we will provide civil contractors with a truly connected construction experience, unlocking valuable new insights for our customers across their entire operation.”

B2W has more than 100 employees, with the majority based in Portsmouth. Trimble’s headcount is in the neighborhood of 11,500.

“Seamlessly connected workflows are key to unlocking the true potential of an organization’s data,” said Elwyn McLachlan, vice president of Trimble’s Civil Solutions Division. “With the acquisition of B2W, Trimble will be able to provide an unparalleled end-to-end digital experience—connecting the digital to the physical—for heavy civil and infrastructure contractors.”

McKeon’s original vision was to create a specialized software tool – which he called B2W Estimate — to replace pencil and paper in estimating the cost of construction jobs before bidding for a project. B2W Estimate ultimately became part of a suite of products contained in the company’s ONE Platform, which was formally introduced in 2014.

ONE – Operational Network Elements – unifies estimating, dispatching, data tracking and maintenance elements into a single unit. Other software companies offer construction management software, but in a piecemeal, disconnected way, according to McKeon.

Without this ability, daily targets are typically set by averaging projected productivity from the original estimate evenly over the duration of a job or a particular phase. These averaged targets of progress, according to the company, can present a distorted impression of job progress on a given day or series of days when compared to actual production data.

The work managed by the B2W software ranges from highways and bridges to energy generation facilities, underground utilities and power transmission, according to the company.

Trimble was founded in 1978 and over the years has acquired other software and technology companies. In 2002, Trimble and heavy construction equipment maker Caterpillar formed a joint venture called Caterpillar Trimble Control Technologies (CTCT) to develop machine control products for improved customer productivity and lower costs on earthmoving projects.