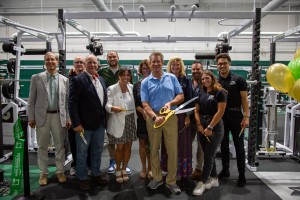 A ribbon-cutting and dedication ceremony was held Sept. 1 for Plymouth State University’s new Morgridge Strength and Performance Lab, a $4 million project to transform the old fieldhouse into a state-of-the-art strength and performance lab.

The building is the final piece in PSU’s Human Performance Center, officials said. Not only will student-athletes make full use of the facility, it will also be used as a teaching lab for a wide range of health and science academic programs, such as exercise and sport physiology and human performance, athletic training and advanced graduate programs for physical therapists.

The roughly 16,000-square-foot facility was built by Engelberth Construction. It opened to students on Aug. 29 and has been under renovation since May 2022 to update the infrastructure, install exercise platforms, treadmills, elliptical machines, stationary bikes and weight-lifting equipment. A new 45-yard-long strip of artificial turf will be used for sprints and resistance running exercises.

The institution funded about $3 million of the project, and the remaining $1 million was raised by donors to the university.

The Morgridge Strength and Performance Lab is more than 10 times the size of the current 1,500-square-foot Vailas Performance Center on campus. The new facility was conceived by Nick Vailas, CEO of Bedford Ambulatory Surgery Center and a PSU alumnus and Athletic Hall of Fame member. and fellow PSU Athletic Hall of Fame member Mike Gittleson. Their scribbled notes were preserved and enlarged for attendees to see how the idea began.