Pignatelli: Why is the governor so far off track? 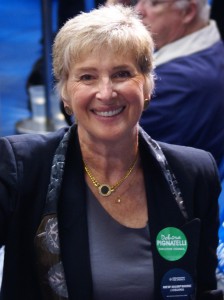 The governor is playing politics with important appointments to state agencies and boards.

Instead of consulting with the Executive Council, he is choosing people he knows cannot be confirmed because they are not good fits, and then blames the Democrats on the Council for failing to confirm them.

I am not going to sit quietly while the governor and his nominees distort what is happening.

The most recent examples of his appointments to the Board of Education and the Office of State Licensure Certification and there have been several others. In those two cases, the nominees were African American men. They were prepared for other positions in state government, such as the governor’s GOFERR commission or others that would have taken advantage of their business backgrounds. I offered to help one of the nominees if he wanted to explore other possibilities.

I strongly recommended other highly qualified African American candidates to the governor for service in the Board of Education. It is in his hands. We all want to have minorities in these positions. We are hopeful, but not optimistic that the governor will act.

I have advised the governor of other excellent nominees for open positions that could easily be confirmed unanimously by the council. I don’t even know their political affiliation. I understand other Councilors have done the same.

The governor never responds, never consults, and goes on his merry way nominating people who are not good fits and cannot get the needed votes of the Democrats on the Council who are doing their jobs well.

I am going to have to get another telephone line to field all the calls that I am getting in opposition to this governor’s inappropriate nominations! The calls and emails from knowledgeable people keep arriving in large numbers.

In my 10 years of experience on the council with other governors, I hadn’t seen this ineffective approach in choosing leaders of our state agencies and important boards and commissions.

This governor is departing from past practices in a way that is not at all productive for our state. I hope the press will tell both sides of the story and even ask the governor why he is going so far off track.

Debora Pignatelli of Nashua represents District 5 on the Executive Council.