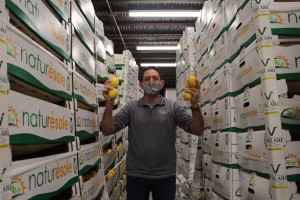 Limoncello producer Fabrizia Spirits has nearly doubled the size of its facility at 2 Industrial Way in Salem with the goal of increasing efficiency to accommodate strong sales momentum and demand. The expansion also makes room for the 500,000 Sicilian lemons Fabrizia imports each year as a key ingredient in its Limoncello, ready-to-drink canned cocktails, lemon-scented hand sanitizer and the new Fabrizia Lemon Baking Company. Shown at the facility is Phil Mastroianni, co-owner and founder of Fabrizia, with a recent shipment of Sicilian lemons.

U.S. Sens. Maggie Hassan and Jeanne Shaheen and 2ndDistrict Congresswoman Annie Kuster have announced a $250,000 USDA Rural Development grant has been awarded to the town of Groton. It will be used to help the town construct a new public works building after its current one sustained wide-scale flood damage.  The new public works building will include four bays for maintenance and vehicle storage, an office for a road agent, a staff break room, a restroom with a shower, a tool storage room and a mechanical room.

have launched Dippold & Dennehy, a real estate firm based in Bow specializing in residential real estate. Also joining the firm are agents Bianca Contreras of Bow and Heather Mann of Concord. “We have pulled together four women with exceptional talent and an unwavering desire to give clients a best-in-class service as they sell or buy their new home,” said Dippold.

Kevin Shaw of Roche Realty Group has been named a Top Producer for 2020 at Roche Realty Group’s Laconia office, producing a closed sales volume of over $35.5 million involving 76 transaction sides for the year 2020.

Lawrence, Mass.-based Jackson Lumber & Millwork, which has a location in Raymond, NH, is celebrating its 75thanniversary this year. The company serves contractors, remodelers and homeowners throughout eastern Massachusetts and southern New Hampshire.