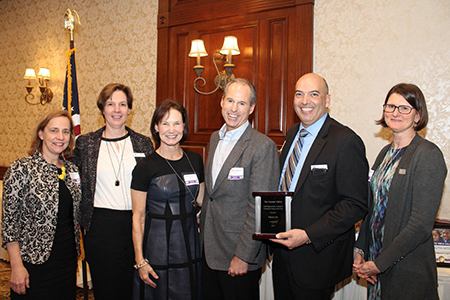 Mark and Sally Stebbins, owners of Hooksett-based Procon, have been named the first recipients of the Granite YMCA’s Community Partner of the Year Award. Procon and the Stebbins family were recognized for their longstanding support of the YMCA’s Y-START and Y-STAY programs, their annual holiday gift donations and a $150,000 contribution that spearheaded renovations of the recently opened teen center in downtown Manchester. Shown at the presentation are from left: Manchester Mayor Joyce Craig, Peg O’Brien, YMCA secretary, Sally Stebbins, Mark Stebbins, Rob Glew, a YMCA trustee, and Michele Sheppard, chief operating officer of the Y.

John Chamberlain of the Lincoln office of Coldwell Banker LinWood Real Estate has been named to Coldwell Banker’s International President’s Circle, an honor awarded to the top 10 percent of sales associates worldwide in the Coldwell Banker system.

The 138-room property features 30 acres and a number of accommodations, including an indoor and outdoor swimming pool, large dining area and game room.

Wason negotiated the transaction between the seller, FRNC LLC, and the buyer, CHHAVI Hospitality LLC. The buyer plans to invest $3 million toward a capital improvement plan, Wason said. The property will be managed by Jamsan Hotel Management Company of Lexington, Mass.

Alan Larrabee of Century 21 North East, Windham, has been recognized by AIOREP, the American Institute of Real Estate Professionals, as among the 10 Best Real Estate Agents for Client Satisfaction for two consecutive years. AIOREP is a third-party rating organization that publishes an annual list of the Top 10 real estate agents in each state.

Brookstone Builders Inc., Manchester, has been awarded an interior upgrade project by FedEx. The scope-of-work involves the interior renovation of approximately 5,000 square feet of existing office space within two FedEx buildings on Commerce Drive in Londonderry near the Manchester-Boston Regional Airport. Ryan Ouellette will serve as Brookstone Builders’ Project Manager/Superintendent.

Morrisville, Vt.-based Union Bank has been selected to participate in the Federal Home Loan Bank of Boston’s Equity Builder Program, which assists homebuyers with down payment and closing costs as well as homebuyer counseling and rehabilitation assistance. Borrowers are eligible to receive up to $15,000 in assistance on a first come first serve basis. Buyers must also complete a homebuyer counseling program. Union is eligible to receive up to $150,000 in 2019 through the Equity Builder Program depending on availability of funds.