‘We are seeing the strain financially on our healthcare system,’ says congressman 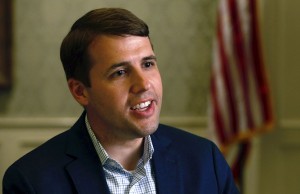 With Covid-19 causing upheaval in the lives of Granite State residents, U.S. Rep. Chris Pappas said in a videoconference Tuesday that it is more important than ever for the federal government to respond adequately to the needs of the state, both financially and in health care.

Pappas, a Democrat who represents New Hampshire’s 1st Congressional District, listened to the concerns of those working in health care, housing and social services who are seeing firsthand the impact the virus and subsequent shutdown of the state’s economy are having.

Pappas, who recently introduced two bills to adequately provide for the healthcare needs of veterans during the public health emergency, pledged to bring the concerns he heard to Washington and fight to ensure testing and treatment for the coronavirus, and that health care in general remains accessible to the citizens who have lost their jobs, particularly in the rural areas.

“It is really crucial to have a financial lifeline to keep moving forward,” Pappas said at the start of the videoconference, noting the millions of dollars already appropriated for New Hampshire in two major pieces of federal funding under the federal CARES Act. “We can’t afford to have anyone dropping coverage at this time and we have to make sure the financial and technical support is there and individuals have access,” Pappas said.

He said the legislation Congress has passed so far has brought more than $164.5 million in funding to New Hampshire healthcare providers, including $17 million worth of funding for testing.

Pappas has pushed for increased access in two areas: Medicaid expansion and creating an open enrollment at this time under the Affordable Care Act so those who lost their jobs and health insurance can obtain insurance through the marketplace.

“We want to streamline the process as much as possible and allow people to take advantage of the opportunity and shop for a plan,” Pappas said.

The congressman is also calling for subsidies of COBRA coverage, which allows employees who have been dismissed from their jobs to keep health coverage with their employers, but at a very expensive premium.

The cancellation of elective surgery, other procedures and reduction in patient visits has hit the bottom line of many rural hospitals, which are already struggling. Pappas said a recent report from the New Hampshire Hospital Association estimates losses of $200 million a month during the pandemic.

“We are seeing the strain financially on our healthcare system, which is pronounced in rural America,” Pappas said. “Our delegation has fought for additional resources for our hospitals, our community health centers, our healthcare providers that are really feeling the squeeze right now … we have to do more going forward, and that’s why I’ll continue to look for ways to double down on that support for New Hampshire hospitals and health care providers.”

Dr. Nick Perencevich with the Kent Street Coalition of Concord said at the roundtable that rural hospitals that are already in a difficult financial situation are being pushed closer to the edge of possibly closing as a result Covid-19.

Amanda Sears, with the Campaign for A Family Friendly Economy, asked Pappas to work on changing the CARES Act. which exempts healthcare institutions from providing paid sick leave and paid family leave under an amendment to the federal Family and Medical Leave Act.

Sears said the carve-out was granted because healthcare workers are deemed critical employees in the midst of the pandemic and granting paid sick and family leave could leave healthcare institutions without sufficient help.

“We understand that, but it is not the right response to ensure there are enough healthcare workers,” Sears said later in a phone interview. “They are being put at risk to exposure (to Covid-19) but can’t get paid leave when they get sick.”

Bringing back workers furloughed in the healthcare industry to work in areas most in need or employing the National Guard could help address the need for health care workers, Sears said.

Also part of the conversation was Kris McCracken, CEO of Manchester Community Health Center. She talked about how the center has changed procedures to allow for continued services such as childhood immunizations while at the same time testing for Covid-19 at separate locations. But McCracken also warned that they are far short of the testing kits they need to handle their 17,000 patients.

Jayme Simoes, state director of Protect Our Care New Hampshire, which sponsored the roundtable, noted that Pappas has asked Congress to make Covid-19 testing and treatment free of cost for children and Medicaid recipients.