For people who have lost loved ones, the disruption of rituals around mourning can have a lasting impact 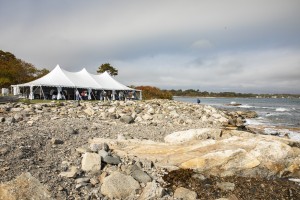 After 16-month-old Clyde Austin died unexpectedly at home in October his parents opted for an outdoor celebration of life at Odiorne Point State Park in Rye, a place the family had enjoyed visiting together. (Courtesy photo).

Victoria Austin and her husband Brent were on their screened-in porch, having a nightmare conversation. Their son, Clyde, died unexpectedly at home at just 16 months. Because of the pandemic, they couldn’t talk about arrangements in the warmth of their Derry home, so to keep everyone safe they were meeting with a funeral home director in the cool October breeze.

“Pre-Covid, you typically would go to a funeral home,” Austin said. “Instead, the funeral director came and met us on the porch, bringing all the options to us.”

As the director explained what a funeral would look like during the pandemic, Austin knew it wasn’t what she wanted to honor Clyde. If a wake and service were held at the funeral home everyone would need to wear masks; there would be no touching or lingering — just well-wishers streaming through without properly being able to express their condolences for the family’s devastating loss.

“I just pictured myself trying to wear a mask while being emotional. It just felt so suffocating,” Austin said. “How can I cry and be emotional? It seems so impersonal.”

Through the haze of her grief, Austin had an idea. Clyde and his three-year-old sister, Abigail, loved to visit the Seacoast Science Center and Odiorne Point State Park in Rye. Two weeks after Clyde’s death, the family held a celebration of life outdoors at the park with about 40 friends and family.

The pandemic has interrupted the way people grieve at the same time that the nation is mourning more than 500,000 Covid deaths. Normally, bereaved people are helped by ritual and processes, said Pamela Sollenberger, a certified grief counselor and owner of The Tapestry of Healing in Exeter. Steps like seeing a loved one in the hospital and attending a funeral can help people process their loss. Not moving through those steps can leave a loss feeling open-ended.

“It’s like a soldier missing in action. You’re waiting for him to come through the door,” said Sollenberger.

Researchers expect to see a surge in complicated grief as a result of the pandemic. Complicated grief, which occurs in about 7% of people who are mourning, happens when people ruminate on a death and their grief begins to interfere with their daily lives. It can be accompanied by symptoms of depression, anxiety or post-traumatic stress disorder; or destructive coping mechanisms, like drinking too much, said Sollenberger. People who can’t gather and mourn are at greater risk for complicated grief, she said.

‘We really needed a hug from a friend.’

Navigating Clyde’s funeral service was just one way that Austin’s mourning has been affected by the pandemic. After Clyde’s death the Austins were dealing with acute grief, while everyone else was still trying to practice social distancing.

“We really just needed a hug from a friend,” Austin said. “Just not having that … it was really hard. I think people don’t understand how hard it has been for us.”

In the immediate aftermath, some family was in town, and friends set up a meal train that was extremely helpful. But as time went on, even well-intentioned friends and loved ones have been consumed by their own pandemic-related challenges, Austin said.

“Everyone is stuck in this survival mode of their own,” Austin said.

Although she still honored social distancing, including keeping Clyde’s memorial small in order to mitigate risk to attendees, Clyde’s death gave Austin a new perspective on the pandemic.

“We’d been through the worst thing we could ever go through. If we somehow get the virus it will be less worse than this,” she said.

In one small way, the pandemic and its acceleration of telehealth services helped Austin. The night of Clyde’s death, she immediately reached out for emergency counseling for input on how best to tell Abigail. She and her husband were able to meet with a councilor immediately, and maintain digital appointments for the first few weeks. However, talking about the loss at home, where Clyde had died, was incredibly challenging.

“Trying to find a place in the home to talk about this horrible thing, and to focus on it… I thought it might be better to meet someone in person,” Austin said.

It was difficult to find an in-person counseling opening, but eventually the family did.

Normally Gayle Robertson, the palliative care team chaplain at Dartmouth-Hitchcock Medical Center in Lebanon, works closely with family members whose loved ones are near the end of life. She gets to know them, which in turn helps her get to know the patient. Seeing and understanding the patient’s condition helps loved ones begin their grieving process, she said.

The pandemic has interrupted that. Visitation in the hospital is severely restricted, which can make it difficult for people to get closure at the end of life, and for family members to understand how frail their loved one is.

The staff at Dartmouth have done their best to create connections between loved ones and patients. Sometimes that means a window visit or a video chat.

“A video visit is sloppy seconds, but we know how close that can bring us to people, and it feels good,” Robertson said.

At DHMC’s Jack Byrne Center for Palliative & Hospice Care, where patients are at the end of life, nurses have sometimes gone a step further. Patients in hospice can have three visitors, but they cannot rotate, which means some loved ones aren’t able to visit. In those cases, nurses have bundled patients up and rolled them outside to visit with a larger group of their loved ones.

“It’s pretty amazing to have all these popup chairs in a parking lot,” Robertson said.

Although little can compare to the sudden death of a child or loss of a loved one, most people are experiencing grief in some way right now.

“There are many aspects to grief that are significant during the pandemic,” Sollenberger said. People are grieving the lives lost, but also their jobs, routines, relationships and sense of security.

Grief often has a resurgence a year after the event or death. With the one-year anniversary of the stay-at-home order in New Hampshire approaching, people might see their grief increase. Sollenberger said that people should acknowledge their losses.

“Just honor where they are, and look at it from the perspective of ‘it will get better,’” she said.

The pandemic has also forced more people to think about their own deaths. Sollenberger is the facilitator for Death Cafe in Portsmouth. The international movement encourages people “to discuss life and death over tea and cake,” Sollenberger said. Topics can range from what happens when we die, to what paperwork should be in order to make things easier on loved ones after you die.

Prior to the pandemic, Death Cafe could have as many as 70 people attend meetings (which were then broken into smaller discussion groups). On March 1, Sollenberger hosted her first digital Death Cafe. She feels it’s important to offer space to talk about death, especially now.

“We all know we’re not immortal. We will be at that juncture at some point,” she said. “However, the fear is still engrained. Our western society doesn’t deal with grief. It’s an important aspect, being able to come in, ask questions, be there and be supported.”

Cat Boyd, funeral director at DiLuzio Foley and Fletcher’s Funeral Homes in Keene, has seen firsthand how difficult this year has been for grieving families. Limits on attendance, mask requirements and social distancing are causing many families to forgo a funeral service.

“It’s been really difficult, because people aren’t getting that closure piece of traditional services,” said Boyd.

Some people, like the Austins, have opted for a celebration of life. Although the Austins’ memorial took place two weeks after Clyde died, those celebrations are often months after a death, which can bring mourning to the surface.

“You try to make it a joyous event in celebrating a life, but it brings up the grief too,” said Boyd.

DiLuzio Foley and Fletcher’s Funeral Homes has started live-streaming services, which allows far-away family to participate in mourning even when they can’t travel. Boyd said the response has been positive, and she anticipates providing the service even after the pandemic.

“With families spread out so far apart the country, it’s great to have,” she said.

The Austins have found small solace closer to home. Victoria draws on her yoga practice, which she does each morning, including the day after Clyde died. Robert joined Crossfit, which has benefited his physical and mental health. Victoria was still nursing Clyde when he died and was able to donate milk to Mother’s Milk Bank Northeast, which provides breastmilk to premature infants and other medically-fragile babies.

After Clyde’s death, a family member set up a GoFundMe for Abigail. Austin agreed, thinking that Abigail might need intensive counseling or other services in the future to process her brother’s death. However, after being isolated at home during the pandemic, Austin realized that would benefit Abigail the most was interactions with other kids.

“I didn’t even think of the social implication of losing her brother and the pandemic,” Austin said.

Drawing on the funds, Austin was able to enroll Abigail in preschool.

“It’s been great for her,” Austin said. After six months of grief, the Austins saw an immediate impact for Abigail. “She seems happy.’”