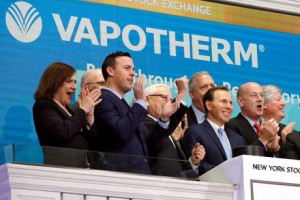 CEO Joe Army and other Vapotherm executives celebrated the company’s IPO at the ringing of the New York Stock Exchange’s opening bell on Nov. 14, 2018.

Vapotherm, the medical equipment manufacturer in Exeter, last week received a delisting warning because from the New York Stock Exchange for not meeting capital and equity requirements,

The notice comes after years of losses, including $65 million in the first half of this year, a declining stock price, renegotiation of its financing arrangement to shore up its and relocation of manufacturing operations to Mexico to increase profitability. The company went public in 2018.

The NYSE told Vapotherm that it failed to meet the capitalization standard for the prior 30 trading days and that its stockholder equity was less than $50 million, according to an Oct. 3 filing with the U.S. Securities and Exchange Commission.

At the time of the notice, the company’s capitalization was $48.8 million, and stockholders’ equity as of June 30 was approximately $13.7 million, according to a company press release, also dated Oct. 3.

The NYSE gave Vapotherm 45 days to correct the deficiencies. If after another 45 days the NYSE approves the plan, it will monitor the company for 18 months. In the meantime, the company’s stock will be traded with the ticker VAPO.BC, to indicate the company is out of compliance with NYSE listing standards.

One reason Vapotherm has fallen short is that its shares have been trading for so little. The stock price peaked at $54 a share in July 2020 at the height of the pandemic, since the company’s breathing apparatus was used as an alternative to ventilators, to keep people suffering from Covid out of intensive care units. But on Wednesday, its closing price was $1.48. (The company could also be delisted if its stock price closes below $1 for 30 consecutive days, the company noted in its second quarterly financial report filed with the SEC on Aug. 3.)

“The second quarter of 2022 was a tough quarter,” said CEO Joseph Army in the Oct. 3 press release.

That company lost $42.7 million in the quarter, which ended June 30, partly due to a 37 percent drop in revenue from the same quarter last year and partly due to an $18.7 million write-off for goodwill and intangible assets after it became clear that optimistic revenue enhancement predictions for purchase of a medical technology firm last year won’t materialize in the near future.

The sales falloff the last few years is tied to the easing of the pandemic, according to its SEC filings. The omicron variant wasn’t nearly as virulent as expected, so Vapotherm’s equipment wasn’t needed as widely as it had been. The relatively mild flu season also contributed to a decline in revenue. Finally, the company’s other major product – an Oxygen Assist Module, which can automatically maintain a patient’s pulse oxygen saturation levels within a specified range for a defined period of time –has yet to be approved for use in the United States.

One way the company hoped to increase profitability is to move its manufacturing operations to Mexico, as NH Business Review reported in July. The move will cost the company as much as $3 million in the short run, according to a recent filing. And the move, which is expected to be completed by the end of this year or early next year has other risks, detailed in the company’s financial filings: decline of production in the U.S. because of lower morale and personnel shortages as workers start looking for other employment as well as lack of experienced workers in Mexico.

But the company is betting that it will work out in the long run. “Labor costs of $6 per hour in Mexico are tracking to our expectations as we recruit production staff. This compares to approximately $28 per hour here in the U.S.” said Army in an August earnings call.

Vapotherm also plans to establish a technology center in Singapore to bring most of the research and development projects in-house to help reduce costs. The company also hopes to defer spending on capital equipment, “normalize the level of commission payouts” and reduce the use of external consultants.

In August, the company predicted that revenue would pick up from the $36 million experienced in the first half of the year to $76 to $81 million, not reflecting any strong Covid surge, but a “modest” flu season.

With expenses in the range of $97 million to $100 million, Vapotherm still expects to lose money, just not as much. As it adjusts its operating expense to pre-Covid levels, it hopes to become profitable operationally by the end 2023.