Shelley Carita, executive director of the Partnership for Public Health in Laconia, watched as Governor Sununu, accompanied by legislative leaders and state officials, stood before television cameras on March 13 to announce steps to stanch the spread of the Covid-19 virus. “I thought, ‘Where were we?’” she said.

The partnership, serving the Laconia and 14 towns in the Lakes Region, is among 13 Regional Public Health Networks, or RPHNs, that operate across the state in relative obscurity.

The RPHNs originated from a 2004 study that concluded that New Hampshire lacked “an established local public health system” and had “no formal mechanism for delivering public health services at the local level.”

Despite setbacks and detours, the system matured in 2013 when, with funding from the state and federal governments, the New Hampshire Department of Health and Human Services contracted with the 13 RPHNs. And three years later they had developed “community health improvements plans,” which include measures to prepare for and respond to public health emergencies.

“The coronavirus is shining the light on us,” said Mary Cook, emergency preparedness manager at the Seacoast Public Health Network in Raymond. “People are beginning to realize that we exist.”

“We provide the infrastructure,” she said, likening the agency’s role to the ringmaster at the circus.

The RPHNs are the principal liaisons between municipalities and the DHHS, ensuring that the directives, protocols and guidance from the federal and state governments are communicated to local officials. Municipalities are required to appoint a health officer.

After more than three decades with the Gilford Fire Department and Lakes Region Mutual Fire Aid, John Beland is the emergency preparedness manager for the Partnership for Public Health.

“I am one person,” he said, “but I’m working with partners throughout the community. We’re the boots on the ground. We’ve planned and trained for this,” he continued, “and we’ve been here before with SARS, H1NI and MERS, but this is unraveling faster than we’re used to.” 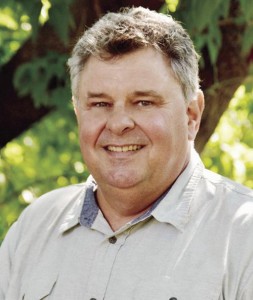 ‘We’ve planned and trained for this,’ says John Beland, emergency preparedness manager for the Partnership for Public Health of the coronavirus crisis.

Beland said that the immediate priority is building capacity to minimize the pressure on hospitals in the event the number of cases outruns the space and resources to isolate and treat them.

LRGHealthcare has as many as 100 beds in Laconia and other 25 in Franklin. He said the plan includes designated alternative care facilities in the area and the beds and equipment to furnish them are stockpiled ready for staging. Likewise, he said, there’s an inventory of other supplies, including personal protective equipment, but he acknowledged “it’s not an infinite supply.”

Beland has visited the Belknap County Nursing Home and other retirement communities, explaining the protocols and measures necessary to protect the most vulnerable population in the region.

Shelley Richardson, administrator of the county home, said the facility has been closed to all visitors while staff undergo screening before entering the building. Within the building residents are practicing social distancing, meeting only in small groups and being closely monitored for respiratory symptoms.

The RPHNs field two trained volunteer units, the Medical Reserve Corps and Community Emergency Response Team. The MRCs draw on medical professionals — including retirees — as well as first responders and social workers. The teams are able to assess and triage patients and assist with running emergency treatment centers and vaccination clinics.

The emergency response teams are trained to assist in managing operations at screening, testing and vaccination sites along with staging and equipping facilities.

Beland said that the rosters of the reserve corps and emergency treatment centers overlap and together number between 50 and 60 volunteers.

“We are in constant communication with our people,” he said, adding that at the moment both teams are “on standby,” prepared to be mobilized at a moment’s notice.

Apart from preparing for the onslaught of the virus, the RPHNs have also planned and prepared for what is to come. Locations have been arranged for emergency shelters if required. The partnership has arranged to establish a point of dispensing, or POD, at Lakes Region Community College and is exploring a second site at the Belknap County Complex to distribute a vaccine when it becomes available.

“We’re ready to do that,” Beland said.

Cass Walker, vice president of administrative and support services at LRGHealthcare, said that already tight staffing levels could be stressed further. She stressed the importance of sustaining the health of personnel, especially medical staff, and realigning shifts to accommodate the circumstances of individuals while maintaining an optimal workforce.

Walker described the Partnership for Public Health as a “key partner” in bringing the resources of the community together and preparing for the emergency. “They grease the wheels,” she said.