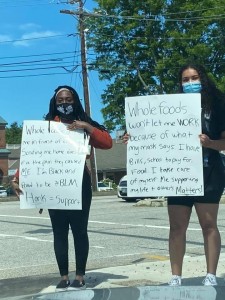 Two employees of Whole Foods in Bedford say they were sent home from work multiple times for wearing masks and sneakers with messages reading “I can’t breathe” and “Black Lives Matter.”

Lylah Styles and Kayla Greene said they went to work wearing customized Black Lives Matter masks in support of the nationwide movement for two days before being told the masks violated store policy. They said they were told to put on a different mask, but they had not been informed of the policy.

“Just two days ago, they finally gave me the policy. They had never shown me anything in the policy that stated that we couldn’t wear them,” Styles said. “The way the situation and everything was handled was just very unprofessional and not understanding.”

Styles and Greene were told that if they didn’t want to change masks, they couldn’t finish working their shifts. The first day, Styles decided to go home while Greene stayed, but the next day, both women clocked out and protested outside the store, Styles said.

Holding signs outside of the store, they asked those driving by to call Whole Foods and honk in support of Black Lives Matter.

Whole Foods shift managers at the Bedford store said they were not able to talk to the media after multiple requests for comment, and redirected the Granite State News Collaborative to the company’s national media office.

“All Whole Foods Market Team Members have signed acknowledgments of our longstanding company dress code, which prohibits any visible slogans, messages, logos or advertising that are not company-related, on any article of clothing, including face masks,” Rachel Malish, a Whole Foods spokesperson, said in an email.

When asked for further clarity on the specific situation in Bedford, Malish reiterated Whole Foods’ dress code policy and added, “Team Members who are in violation of the face mask dress code, regardless of the messaging, are simply offered a new mask to comply with our company policy. If a TM (team member) refuses to change, they are unable to work until they comply with dress code. One Team Member chose to wear the new mask and work her shift and one chose not to.”

Amazon, which owns Whole Foods, announced last week it donated $10 million to organizations working toward racial justice, including as the NAACP, National Urban League, and the Thurgood Marshall College Fund. The company also wrote that it “stand[s] in solidarity with our Black employees, customers, and partners.”

Styles said Whole Foods in Bedford is working to find a solution that would allow employees to express their support for the movement, but she worries the messaging may misrepresent the movement.

“With Amazon, they make money off of the movement, so it doesn’t make sense why their employees can’t wear stuff to support that, because it’s driving traffic to their sites,” Styles said. “With what I had to deal with emotionally, it’s like why didn’t these solutions come to me the very first day? Or why wasn’t there a formal discussion right after you saw us wearing them?”

Styles said the working environment “doesn’t feel welcoming anymore” and she will be pursuing other jobs.