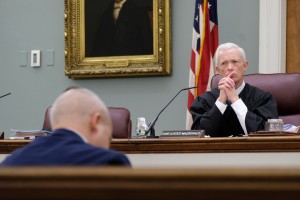 Justices on the state’s highest court are considering whether to uphold the temporary suspension of a high-profile attorney accused of mishandling client funds and then lying to investigators.

Robert Fojo of Bedford is alleged to have failed to properly pay clients he represented in civil lawsuits including a slip and fall case, as well as improper bookkeeping. His law license was temporarily suspended by the court in December after the Attorney Discipline Office filed a complaint.

During a Feb. 15. hearing , Fojo’s attorney, William Saturley, told the court his client poses no threat to the public, and that the suspension should be lifted until the disciplinary process, which could last for months or longer, is complete.

The court handed down the suspension in late December, including a prohibition on touching client money still in his possession. The following day, Fojo allegedly moved money out of an account, prompting a heated line of questioning from Chief Justice Gordon MacDonald. MacDonald also pointed to a recommendation to uphold the suspension from an independent referee previously assigned to review the matter.

“Your client misappropriated client funds, lied to his client, lied to the disciplinary authority, and now has defied an order of this court,” MacDonald said. “Your response please.”

The Attorney Discipline Office alleges that Fojo improperly pooled funds in a bank account, and used the money of one client to pay another. In total, he’s alleged to have mishandled approximately $100,000 in funds. Fojo admits to the bookkeeping mistakes, but places some blame on an inexperienced office assistant.

The justices didn’t issue an immediate ruling on whether it will lift Fojo’s suspension.

Fojo has been involved in numerous cases across New Hampshire and Massachusetts challenging public health measures stemming from the pandemic, including mask mandates in schools. To date, it doesn’t appear he has been successful in any of those lawsuits.