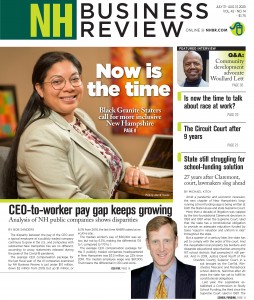 In addition, staff writer Bob Sanders won three awards, including first place for Business and Economy Reporting for his ongoing coverage of how the Covid-19 pandemic affected the state’s businesses and economy. He received another first-place honor in the Health Reporting category for his article, “The Canadian conundrum,” which looked at the difficulties in importing lower-cost prescription drugs from Canada, and he won second place in the Investigative Story or Series category for his article, “Where did the $40 million in Covid contracts go?”

Also honored was Liisa Rajala, whose article, “Now is the time: Black Granite Staters call for a more inclusive New Hampshire,” written in the wake of George Floyd’s murder, won second place in the General News category. And John Angelo’s article, “People of the book: The literary treasures found, and searched for, in NH’s used bookstores,” won second place in the Feature Story category.

The Granite State News Collaborative, of which NH Business Review is a member, also was honored for several of the articles and series it produced in 2020.