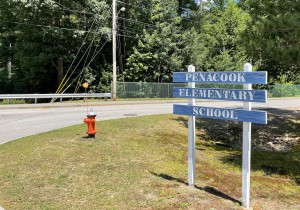 The village of Penacook is six miles up the road from downtown Concord. In nearly all respects, its residents are Concord residents.

But in the matter of paying for education, residents face different realities. Concord property owners paid $12.46 in annual local property taxes for every $1,000 of their home’s value in 2021. Penacook property owners, whose students attend a different school district, paid $15.41. For a $400,000 home, the difference between locations is $1,180 per year.

The discrepancy – and others like it among towns throughout the state – is a central theme of a new lawsuit taking on the state’s school-funding model. This one, unlike another awaiting trial in Rockingham County, focuses on taxpayers.

New Hampshire’s school-funding model allocates a minimum of $3,709 per child per year to every school district, a number that averages out to about $4,600 with additional aid. The rest comes from local property-tax dollars, raised and budgeted as towns see fit.

To Andru Volinsky, the lead attorney on the new lawsuit and a former Democratic executive councilor, the case for a new court ruling hinges on a simple calculation: The average total per-pupil cost for New Hampshire students was $18,434 in the 2020-2021 school year, according to the Department of Education. Confining the state’s share to $4,600 per student per year falls far short of the actual cost of educating a student.

“And once you accept that, that means that the balance – whatever amount – of public education is paid for based on local property taxes,” Volinsky said in an interview. “And that means that people are suffering a disadvantage and unfairness and inequality based on where they live.”

The plaintiffs in the new lawsuit, filed in Grafton County Superior Court on June 28, argue the taxes they pay are the products of that inequality. They include Robert Gabrielli, Jessica Wheeler Russell, and Adam Russell, all of whom pay property taxes in Penacook, as well as Steven Rand, a resident of Plymouth.

New Hampshire is already facing legal action against the formula it uses to allocate state money to public schools.

A lawsuit brought by the Contoocook Valley School District in Peterborough (ConVal) in 2019 – which was joined by 15 other school districts – is awaiting trial before Rockingham County Superior Court, after the Supreme Court declined to make a major ruling and sent it to the lower court to adjudicate disputed facts.

But while the two lawsuits tackle the same formula, their approaches differ. The ConVal lawsuit seeks to force the state to increase the amount of per-pupil funding it provides to school districts and better define what counts as an adequate education, arguing that the state is falling short of “adequate.” The latest lawsuit makes a similar case but is centered on the taxpayers.

“This is now to the level of simple math,” Volinsky said of the taxpayer lawsuit. “… Taxpayers are experiencing different burdens based on the value of their local property.”

Volinsky, and co-counsel Natalie Laflamme and John Tobin, say the goal of the lawsuit is to reinforce the principles laid out in the two Claremont Supreme Court decisions of the 1990s. The first of those cases determined that the state constitution required the state to provide an adequate education. Because the funds used to provide that adequate education came from state funds, they had to be paid for by state taxes. The tax, Volinsky argues, must be imposed at a uniform rate.

The second Claremont case found that the state’s funding system did not live up to the standard of adequacy – and forced the state to devise a new system to fund an adequate education for all students with equal taxes. But the adequacy grant system that has emerged since that second Claremont case has left a large shortfall that isn’t applied uniformly, Volinsky says.

School-funding advocates say the result is a violation of Part II, Article 5 of the state constitution, which grants authority to the Legislature to “impose and levy proportional and reasonable assessments, rates, and taxes.” That provision formed the basis of the Supreme Court’s ruling in Claremont II that the state must create a formula.

In the two decades since that Claremont II decision, the state has tried a few approaches to creating a school-funding system that’s applied more uniformly.

In 1998, then-Gov. Jeanne Shaheen endorsed an approach in which the state would impose a standardized tax for residents of every town, but then would adjust each town’s tax rate to allow them to keep the excess revenues. That approach, known as the “ABC plan,” was deemed by the state Supreme Court to be unconstitutional and incompatible with the Claremont II decision.

The state’s efforts continued with the creation of the statewide education property tax, a system still in place today. That tax is added onto a town’s local education tax, and the rate varies year by year. The Department of Revenue Administration sets the rate to the level necessary in order to raise $363 million each year.

Advocates of the statewide education property tax, known as SWEPT, say that it helped to standardize a portion of the cost of education. But education funding advocates say it still does not prevent inequity.

In 2011, lawmakers removed the mechanism that distributed excess SWEPT revenues from wealthier towns – so-called “donor towns” –  to poorer towns. That change means “property-rich” towns – whose pricier properties and businesses generate much more education tax dollars – may now keep any of the extra SWEPT dollars they raise, and use those funds to lower their other property taxes for residents. It also means that “property-poor” towns are no longer getting a boost from their wealthier neighbors.

In 2021, lawmakers passed a budget that temporarily lowered the total amount of SWEPT revenues the state needs to collect from $363 million to $263 million for the next biennium. The measure has been billed by Gov. Chris Sununu and Republicans as a cut to property taxes. But critics have noted that the $100 million across-the-state cut was paired with a halt in targeted aid programs that benefited poorer towns. Poorer towns will need to raise local property taxes to cover the loss of aid, while property-rich towns, which don’t need the aid, will largely benefit from the tax cut, according to an analysis from Reaching Higher NH, a left-leaning education think tank.

Christina Pretorius, policy director at Reaching Higher, noted that many aspects of the state’s funding formula have stayed the same for years. The base adequacy of $3,709 has only slightly increased in recent years, and the $363 million funding target has stayed the same since 2005.

That’s meant an increasing financial burden for towns, she said.

“As the years went on, and the costs go up, that was a static number, so, year after year towns are depending even more on local property taxes,” Pretorius said.

Now, Volinsky’s taxpayer lawsuit asks the Supreme Court to better define what a constitutionally adequate education looks like, and how much the state should raise to get there. Volinsky sees a two-step process toward success. Step one, Volinsky says, is getting the court to declare that $3,709 is not adequate. Step two is getting a ruling that finds that school districts in the state must have comparable funding, a decision that would upend the current system.

It is unclear whether the new lawsuit or the ConVal lawsuit might produce the kind of sweeping decision favored by the court in the 1990s.

To Pretorious, the lawsuits may each help the Supreme Court illuminate the state’s proper constitutional role in education funding – in different ways.