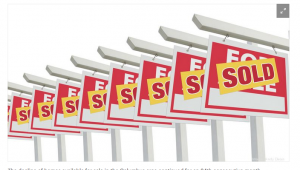 It looks like a lot of people got a new home for Christmas in New Hampshire, but the real gift seems to have gone to sellers as sales volume in the normally quiet month of December rose by nearly 50%.

According to the latest statistics from the New Hampshire Association of Realtors, December was just one more hot month during a record year, but it comes when, generally, sales cool off. But the strong seller’s market we saw through 2020 continued through the end of the year, market thanks to record-low home inventory.

The median home price remained at $350,000, but usually in the winter months that median falls, according to the Realtors’ report. That represents a 16.3% hike in the median price from December 2019 – the sixth straight double-digit monthly increase.

The reason: There is an increase in demand – probably from those seeking to escape places like Boston and New York during the pandemic — that is not nearly met by the supply. Homes, on average, now sell in 33 days, nearly half the time they took to sell a year ago. Yes, there were more than 800 new listings in December, but that’s more than half of the number in December 2019, when 1,383 homes were on the market.

The result: There is now less than a month’s supply of homes on the New Hampshire single-family-home market –  nine-tenths of a month, to be precise.

All this doesn’t bode well, since the Realtors’ Affordability Index, which fell 5.3% for the month and 11% for the year.