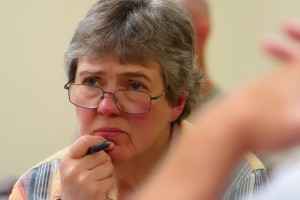 Alex Surak knew he wanted a long career in graphic design, but couldn’t see that happening at the agency that he was working for. There didn’t seem to be much room for advancement, and he knew especially in the small New Hampshire graphic design community it would be a long time before he rose to the level of art director.

“I felt capped at this place,” said Surak, 26, of Goffstown. “There wasn’t a whole lot of room for growth.”

So Surak decided to branch out on his own and start a business as a freelance graphic designer. He’s been freelancing for about three years now, and hasn’t looked back.

“With freelance, I could do more in my profession,” he said. “I could pick and choose what I wanted to do, and I didn’t feel I was capped.”

Roughly 36% of the American workforce does freelance work, according to NPR. Freelancers are self-employed people who do contract work, ranging from consulting to artistic work. Nationally the number of people freelancing has increased by 2 million in the past year, according to a study from Upwork, a platform that connects freelancers with work.

There’s no data on how many New Hampshire residents take this approach to their careers. The Department of Labor doesn’t keep those statistics, said Rudy Ogden, deputy commissioner of the department. No one at the University of New Hampshire, which often has economists familiar with the New Hampshire economy, studies this area of the economy, according to UNH’s press contact.

However, the interest in self-employment support during the pandemic indicates that many Granite Staters are self-employed, often freelancers or gig workers. For example, 13,000 applications were submitted for the state’s Main Street Relief program, but 4,700 of those were rejected because they were from self-employed individuals, who didn’t qualify for that program.

In response, the state launched the New Hampshire Self Employed Livelihood Fund. Roughly 8,500 people applied for support from that fund, Gov. Chris Sununu said in July. Since the program was for people who have had a loss in income this year, it’s likely that the number of self-employed people is larger than that.

Despite the growing number of people freelancing, there’s little data available, says Erin Hatton, a professor in the Department of Sociology at the University of Buffalo in New York.

Hatton studies labor markets and has written about the gig and temporary workforce.

“Data on this sector are really hard to come by, in part because there’s a lot of diversity in this sector,” she said. “I don’t know if there are concrete numbers.”

For example, the descriptor “self-employed” can apply to freelancers like Surak who chose this type of work, or gig workers for companies like Instacart or Uber. Often, gig workers have been pushed into the work by limited job options or low pay, Hatton said. While traditional freelancers set their own hours, wages and projects, gig workers usually need to follow company protocol and wages.

“The difference is one of control,” Hatton said.

Like Hatton, many economists also believe that gig workers should be classified as employees.

“The problem is that gig companies are misclassifying employees as independent contractors,” Hatton said. “When they do that, they get out of all the costs and responsibilities that we as a society have attached to employment,” like paying overtime or unemployment, for example.

The overlap between traditional freelancers and gig workers complicates measuring this growing sector of the economy.

“It does confuse the terminology, but [companies like Lyft and Uber] are purposefully confusing it,” she said.

Ogden, at the Department of Labor, said that the department is conducting more investigations into whether companies are misclassifying employees as independent contractors.

“As time goes on it’s an increased focus for us, because we’re seeing companies try to off load certain costs or insulate themselves from certain costs,” he said.

Despite the gray area, economists agree that untraditional work is growing during the pandemic.

“We are in this very real economic crisis and unemployment is skyrocketing. There’s been a very paltry government response, so people are doing whatever they can,” Hatton said. “The gig economy is one of those places where they’ve sought work and found it.”

With freelance work likely here to stay, policy changes like making affordable health insurance more widely available outside employee-sponsored plans and allowing gig workers to access unemployment (which they can do during the pandemic) could make more people comfortable with freelancing, Hatton said.

“The way we have our economy structured, most workers desire stable employment,” she said. “If we structured it a different way, workers would be more free to seek out gig work.”

Opting into the gig economy

Shaun McGahey, 35, of Epsom, started working in the gig economy for security. She began delivering groceries via the app Instacart in April to supplement her work as a service advisor.

“I wasn’t sure what was going to happen with my work and Covid,” she said. “I figured since I’m a fairly healthy woman, [I could do] grocery shopping for someone who didn’t feel safe.”

She knew the downsides of Instacart when she started, like the fact that pay is unpredictable. But, she liked that she could do it on her own time, without any commitment. She’s made anywhere from $75 to $550 a week with her gig work.

“While it’s not something I would depend on to provide day-to-day, I definitely feel it helped keep us sane knowing we at least had income if anything happened,” she said.

Tara Bamford, 60, lives in East Thetford, Vt., but freelances entirely for New Hampshire-based clients. Before becoming a freelance planning consultant in 2017, Bamford worked for ten years as planning director for the North Country Council in Littleton. Prior to that, she was executive director of the Upper Valley Lake Sunapee Regional Planning Commission in Lebanon from 1999 to 2007.

When she was ready to move on from her position in Littleton, freelancing seemed like a desirable option.

“At my age it seemed like the logical thing to do,” she said. If she were to pursue another traditional job, she would have had to move — which she wasn’t interested in — or work for one town, whereas she’d always taken a regional approach to planning. Freelancing allowed her to continue with the type of work she wanted to do.

“I feel like I’m not spread so thin, trying to do so many things, so I can give a lot of attention to each client. It feels great to be able to stay focused on one project and work when I am most productive, without regard for the clock or calendar,” she said. “That’s really rewarding.”

Bamford said she nets slightly less as a freelancer than she would in a traditional job. However, she saves on driving time and costs like dog sitting, so she says her financial situation has remained about the same. Overall, “it’s been totally a positive,” she said.

Surak feels the same. Before he got into full-time freelancing he spent a year freelancing on the side while working his agency job. That allowed him to build his contacts and get a feel for the ebbs and flows of freelance work.

“A lot of the time it’s really slow for a little bit, then 10 people want something done,” he said.

At first he had to convince himself — and his parents — that freelancing was a viable career option in New Hampshire.

“I don’t have the Boston or New York atmosphere, the big cities where you can find clients by throwing a rock and you hit one,” he said. “In New Hampshire, you have to market yourself more.”

Both Surak and Bamford said that their workload decreased initially during the pandemic, but has been on track with previous years over the summer and fall. Even during the pandemic and possible recession, Surak is confident in his decision to freelance.

“I find more fulfillment doing freelance than I ever did at a 9-5,” he said.