‘Females are not delegated to doing office jobs’ 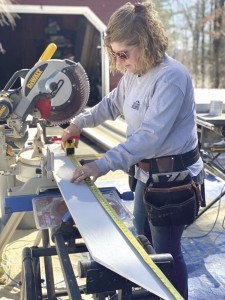 Betsey Donovan of Meredith, a carpenter and framer for Inter-Lakes Builders, takes a measurement at a local job site. (Courtesy photo)

Betsey Donavan owned and managed a restaurant, then became a stay-at-home mom before she discovered her ultimate calling – something she had never envisioned, but fell into by helping others. She became a home builder.

Now 53, Donavan is a framer and all-around carpenter for Inter-Lakes Builders, doing almost anything that goes into constructing a house, shed or barn – from the foundation up. It’s a career she says continues to give her personal satisfaction, an active life outdoors, an opportunity to work with her hands, variety without boredom, and the joy and pride that come from teamwork and creating something lasting.

“You make people happy. It’s crazy what you can build with your hands,” Donovan said. “I can drive through town and say, ‘I built this.’ Somebody loves a meal I cook, but that’s over and gone in an hour. This is going to last a lifetime for some people.”

In an era when barriers have toppled for women in everything from sports to active military service, Donovan is a groundbreaker and a trailblazer. As a woman in construction – especially one working full-time in a building trade – she is one of a modest but climbing number of females in the construction industry. Most work as administrators and executives-in-training, but increasingly, women are becoming estimators, construction managers, architects, engineers, safety experts, owners and entrepreneurs – in a world traditionally designed and reserved for men, according to employment reports.

“Females are not delegated to doing office jobs,” said David Warrender, director of the Huot Technical Education Center at Laconia High School, which serves the Lakes Region. “They can do any part. Whether they’re a roofer or a heavy equipment operator, or in any trade. It’s all fair game.”

National workforce statistics cited last month by BigRENTZ.com, which leases heavy construction equipment, show that women now comprise roughly 10 percent of people who work in the construction industry, yet only 1 percent of workers on job sites are female, and even fewer are in the skilled trades.

According to local employment dynamics data cited by New Hampshire’s Economic and Labor Market Information Bureau, women made up 15.2 percent of the state’s construction industry workforce in 2019, including those who staff offices.

Nationwide, with housing stock at historic and unsustainable lows, training for the trades is becoming increasingly essential, and a near-guarantee of a financial success. Carpenters, plumbers and electricians are retiring without sufficient replacements. A shortage of skilled labor is reported as leading a reason for the tight supply and rising price of homes here and across the country, just behind skyrocketing lumber costs and COVID supply chain slowdowns, according to the National Association of Home Builders and industry analysts.

When it comes to the building trades, women have become an increasingly valuable workforce to rely on – especially in the Lakes Region, where residential home construction and renovation remain in abundant demand – and construction trades have been a financially attractive career option for generations.

“You could write your own ticket if you became a plumber or an electrician. You can do it. Girls can do it. I think the kids are under such pressure to go to college,” said Donovan. “I don’t think the trades are pushed enough.” 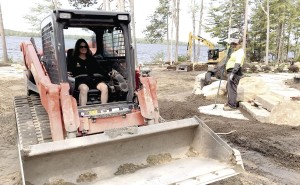 Betsey Donovan of Meredith, a carpenter and framer for Inter-Lakes Builders, takes a measurement at a local job site. (Courtesy photo)

“I love framing and putting up the skeleton of a house. It’s a ball,” she said. “It’s fast and hard, and it’s ‘Go!’ I’ve never seen anyone be negative because I’m a girl. I never let them see me as weak. It’s always been, ‘Good job.’”

Stereotypes persist, but they shouldn’t discourage women, said Leslie Bryant, owner of Bryant Paving in Meredith, who bought her first roller, paver and truck at auction in 2008, when the contractor who black-topped her driveway in Holderness left the business. Now she has a fleet of 11 trucks, three pavers and seven rollers, and 20 employees on her payroll. “It’s a trade and it’s not going anywhere for a long time,” said Bryant, who left a successful career in manufacturing.

“As a woman, I think initially I wasn’t taken seriously.” Bryant said she received intimidating phone calls from the local competition, and from people who didn’t think she belonged in the business. “Now I have great relationships in the community and even with my competition. At the beginning, people had the impression that I just rolled out of the kitchen with an apron, and I had no idea how to run a business.”

“It’s always a little more challenging being a female working in a mostly male environment,” said Rhonda Blackey, who does landscape design, permitting and plant procurement for Stephens Landscaping in Moultonborough, which constructs decks and patios, elevated beaches, and outdoor environments, mainly for waterfront properties in Moultonborough. Blackey’s job entails figuring out what’s possible within federal and state regulations – and within landscaping budgets that lie between $50,000 and $750,000.

She said she enjoys being treated as one of the team, and is seen as value-added.

“I think they’re very open and receptive to women in the industry,” said Blackey. “I think we have more attention to detail and an eye for it. We complement each other well. There’s something about building and making something as seeing it when it’s done,” she said. “You’re very proud and it makes you feel good to be outdoors with your hands in the dirt, making people’s dreams come true.”

Even with changes in opportunities and society’s perceptions of careers for women, Donavan said she surprises many customers when she arrives to build their homes.

“Initially it doesn’t faze them, but when they see me working, I think they have more respect” for her, and for her company employing a female carpenter. Curiosity becomes kudos. Donovan smiles when she hears “Wow!” or “Hey, Yay!” from visitors to her job sites, which is a twist on construction culture of the past.

Success is mostly in your mind, said Donavan, who concentrates on working as hard as the men do.

“My dad said, ‘If you can’t get it in your truck, how are you going to get it out?’ If the guys were carrying two stick of lumber, I’d carry three. He also said, ‘You can do anything you set your mind to, as long as you can figure out how,’” Donovan said.

Growing up with a rise-to-the-challenge mentality instilled confidence to try and persevere in an unorthodox career. She started with Inter-Lakes Builders doing odd jobs on work sites, cleaning up, running errands and holding pieces of wood. Then one day someone didn’t show up for work, and Donovan was handed a nail gun.

“I had my own tool belt. I cut rafters and studs. I used skill saws and chop saws. Framing, roofing, anything the guys would do, I would do. It didn’t matter that I was a girl,” Donovan said. “They embraced me because I was willing to work hard and absorb everything they had to teach. Now I don’t shingle roofs as much, but I can and will, if that’s what they need. The guys at the lumber yard have huge respect for me. I’m not looking for a ‘girl card.’ I’ve never done that. If I can’t get it done, I’ll ask for help.”

Breaking into male construction culture can be intimidating, but respect and camaraderie increases when you persevere, or can fill a niche.

For 13 years, Cindy Cassavaugh has worked at Bonnette, Page and Stone Construction in Laconia, starting in human resources before becoming the company’s OSHA compliance and worksite safety officer.

Now, she tours job sites before and during construction, checking that everything meets code, looking for working fire extinguishers, guards on saws, properly-used extension cords, and subtle and glaring workplace hazards – including someone standing too high on a ladder.

“The point is, we want everyone to go home safely,” Cassavaugh said. “What I like is being part of the process,” whether it’s seeing the Colonial Theatre restored, or Franklin Mills. “It’s great to see the end product and be part of that team. It’s something that will live on for generations.”

Stereotypes can be intimidating, and so can occasional salty banter on job sites, which women say they tune out. Although females are rising in allied construction careers, it’s still a male-dominated culture, and men continue to have the advantage of upper body strength, Cassavaugh said. But increasingly, technology is leveling the field, including tools and innovations that help with lifting and moving, so both males and females can do it safely, she said.

Cassavaugh said she’s part of an expanding network of female construction safety workers who feel rewarded by guarding safety in a physically dangerous field, and looking for problems that others might overlook. “It’s a fulfilling, positive experience. There are so many pieces to it. It’s not redundant,” she said.

Although change has been slow, Cassavaugh said more women are working now as sheet-rockers, a job that involves cutting and nailing wallboard in place and covering the seams with tape and putty which must be smoothed to become invisible under paint – a skill that requires finesse, attention to detail, and a steady hand.

Warrender, the Huot Center director, said he hopes the number of women in the trades will increase over time. There are ongoing nationwide efforts to interest more middle and high school girls in construction careers through job fairs, summer camps for middle school girls that are building trades-oriented, and guest speakers from the industry. But recruiting teen girls remains a steep climb – just as challenging as recruiting boys to classes in early childhood classes, elementary education and teacher preparation, he said.

But Warrender said he is inspired by those who chose the non-traditional courses for females, such as automotive. Despite recruitment and information from high school guidance counselors, the most effective lure continues to be having a family member or friend in that job, someone they admire. Gender stereotyping may be much less critical than early exposure, he said.

“If they’re passionate about something, they tend not to let stereotyping stand in their way,” Warrender said. “Just plugging a picture of a girl into promotional material. I don’t think kids are that linear in their thinking. It’s ‘What do I want to do? What’s important in my family?’ Decisions are also based on friends. They say, ‘Cool, I want to do that as well.’”

Sometimes the interest doesn’t translate to a career, but it’s pursued as a valuable life skill.

Recent comments from girls have included “I want to lay my own floors when I get my own house,” said Brenda Richards, executive director of Lakes Region Home Builders Association, which collaborates on training opportunities in the trades at the Huot Center. One said, “I’m going into nursing, but I want to build my own shed.”