Recipients of grants liable for tax, but not loans 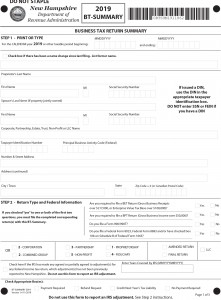 All of the grants business have received or will receive from the state and federal governments are taxable by the state of New Hampshire, but none of the government-backed loans will be, the state Department of Revenue Administration announced Tuesday.

The total includes the more than $2.5 billion that state businesses received through the federal Paycheck Protection Program and Emergency Injury Disaster Loan program as well as $300 million from the state’s Main Street Fund for small businesses, the Self=Employed Livelihood Fund and other state-controlled federal grants for healthcare providers, farms and daycare centers.

If the state were to tax all that at the current 7.7% business profits tax rate, that could amount to a $200 million windfall for state coffers.

Of course, taxes are a lot more complicated than that. Businesses will still be able to deduct their expenses, including expenses they wouldn’t have incurred anyway, like paying wages to workers they would have laid off, and that means they could, in effect, end up not paying any taxes on the money.

Federal income tax rules work in reverse for the PPP program: Businesses won’t be taxed on the income, but they can’t deduct the expenses that it paid for.

Things get even more complicated for companies that don’t make a profit, and presumably a lot won’t given the anticipated drop of income because of the pandemic. (A recent NH Business Review analysis based on PPP and Main Street applications shows that businesses expect a combined $2.5 billion drop of revenue this year as opposed to last.)

But the money spent on wages will be counted as part of a company’s enterprise value base, which is taxed under the business enterprise tax at 0.6% rate. There are no deductions under the BET , but there are thresholds which result in many small business paying no taxes at all.

The PPP ended Aug. 8. According to the U.S. Small Business Administration, which oversaw the program, a total of $525 billion was spent nationwide, meaning that $125 billion was left on the table. Talks on changing the rules to allow a business to apply again – perhaps with some additional funding – have stalled in Congress.

The SBA has not released final state-by-state totals, but as of July 17, some 2,400 New Hampshire businesses received a total of about $2.55 billion in PPP funds. The Main Street and SELF programs have also ended, though there are still ongoing funds to help farms and another $30 million fund run by the Business Finance Authority to help businesses that fell though the cracks for other support initiatives.