Amid Covid restrictions, they’re getting creative about encouraging shoppers to think local 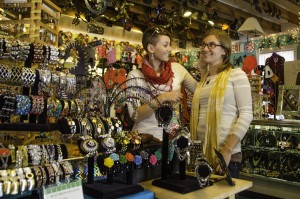 A couple of shoppers check out jewelry at Cool Jewels in North Conway Village. (Photo by Wiseguy Creative Photography)

As if 2020 hasn’t been topsy-turvy and upside-down enough, now retailers are asking for prospective customers to stay away from their stores on Black Friday.

Instead, many businesses across the Granite State are finding new and inventive ways to sell their goods on what has easily become the busiest shopping day of the Christmas season while keeping the visits to their stores at a minimum.

“I don’t think, honestly, we will be that busy in the store,” said Mick Pratt, marketing and events coordinator at Bull Moose Music, which has locations in Portsmouth, Salem and Keene. “At least that is what we are putting out there – you don’t have to be here on Friday. You can get (sale items) all month and have it shipped to you or pick it up curbside. The idea is to minimize the amount of people here that weekend.”

Customers seem to be receptive to that message, he said.

“I think a lot of folks don’t want to shop that weekend, except online or on the phone,” he said.

Black Moon Games in Lebanon is hoping its new online store will help alleviate the normal busy, congested store. Owner Tony Vandenberg said that the company launched the website “out of thin air” in April, and will be relying on it this holiday season.

“We will push pretty hard to prioritize web store orders and pick-up orders instead of people coming to browse,” he said.

Black Moon Games is limited to just four shoppers in the store at one time because of Covid-19 restrictions. That means that the store, which features board games, card games, role-playing games, miniatures and puzzles, has already had to shut down its in-house tournaments and games. It is also limiting visits to 15 minutes.

To incentivize customers to shop despite the in-person limitations, Black Moon is bringing back its holiday scratch ticket promotion allowing customers who buy in the store or online during Black Friday weekend to save up to $100 on future purchases.

“Black Friday weekend is usually one of the busiest weekends of the year,” Vandenberg said. “Our regular customers who have been with us for years love the scratch tickets. Even if we haven’t seen them for a while they will come out of woodwork (to get them).”

Ragged Mountain Equipment in Intervale will also be utilizing a new online commerce option to keep holiday business flowing while curtailing the number of customers in the store. But if shoppers do decide to venture to the Mount Washington Valley there will be incentives from Ragged Mountain Equipment and its fellow White Mountain Independents, a network of locally and independently owned businesses in North Conway, Conway, Jackson and Intervale. 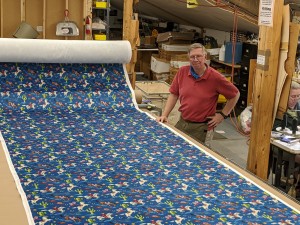 Cort Hansen, business partner at Ragged Mountain Equipment in Intervale, stands next to a roll of fabric. (Courtesy photo)

Friday.” Ragged is making the scarves and will also be giving one to customers who come to its store wearing plaid.

Ragged owner Rob Nadler is expecting a normal amount of foot traffic thanks to the draw of downhill and cross-country skiing, snowshoeing and ice skating in the area.

“It has been so hard to figure out business (during Covid),” said Nadler. “In some ways, I think we will see more business because people really like shopping locally. And for us, we sell outdoor equipment, and I think there will be a huge rush for anything to be used outside. We’ve already had a hard time keeping supplies stocked.”

Susan Logan, marketing manager for White Mountain Independents, worries that store limitations due to the coronavirus could keep some shoppers away.

“Covid is throwing a big question mark into everything,” she said. “Traditionally. Black Friday in New Hampshire, with no sales tax, is a huge day for everyone. I think we will be busy, but I think the head counts will be smaller with store limitations.”

North Conway, in particular, has become a popular shopping destination, but Logan believes this holiday season will look different.

“With Covid and the restrictions, which we support, that is certainly going to affect business,” she said. “I don’t think people (want to) wait in lines.”

Runner’s Alley, which has stores in Manchester, Portsmouth and Concord, will continue its Run for the Money promotion, which gives customers $5 off per mile (up to six miles) on future purchases of $100 or more when they sign up and run from one of the three locations. This year there will be a couple of changes that will limit the number of customers in the stores.

First, instead of having to come into Runner’s Alley and sign up for the qualifying run, runners can record on a device or app and show it at the store. Second, the run can take place during Black Friday weekend. The discount can be used all weekend instead of only on Friday.

“This year it is really difficult to predict exactly what is going to happen,” said Jeremiah Gould, design and marketing manager at the store. “The drive to support local business is strong in New Hampshire so we might see a bit of a boost compared to what we’ve seen in the past. I know customers want to support us and come in but just not sure if they will.”

Runner’s Alley, which due to the size of the stores can allow only four customers inside at a time, also expects to have plenty of online discounts for Cyber Monday. On Tuesday, Saucony – a brand that the store sells – will donate 25% of sales to the Black Men Run and Black Girls Run organizations.

Bull Moose Records had been expanding its Black Friday deals from the weekend to a full week the past few years. This year, in order to spread out the number of people in the stores, the sales will last two to three weeks.

“The biggest change for us this year is we won’t have ‘doorbusters,’ where someone has to come out on Friday for a deal,” Pratt explained. “What we are trying to do is spread out those days.”

“We don’t want a ton of people here before the doors open on Friday. No one wants that. It doesn’t make sense.”